Pope Francis: ‘I am the devil’ compared to John Paul 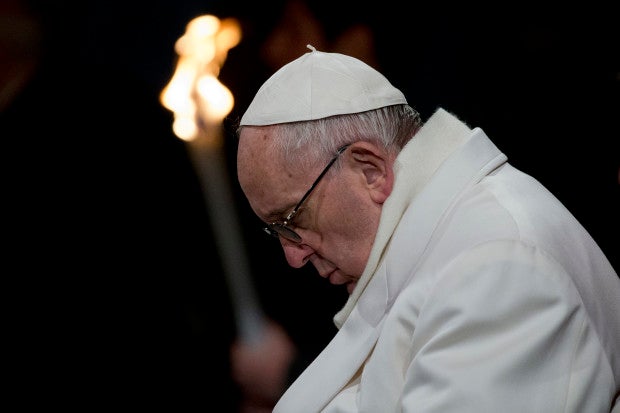 Pope Francis leads the Via Crucis (Way of the Cross) torchlight procession celebrated in front of the Colosseum on Good Friday in Rome, Friday, March 25, 2016. AP FILE

VILNIUS, Lithuania — Pope Francis has acknowledged that his reputation pales a bit compared to St. John Paul II — at least as far as Poles are concerned.

Greeting journalists Saturday en route to Lithuania, Francis was given a book about the former pope by Polish photographer Grzegorz Galazka.  Receiving the large book with a beaming John Paul on the cover, Francis quipped: “(Pope John Paul II) was a saint, I am the devil.”

Francis’ quip appeared to acknowledge that he has his detractors, particularly among conservative Catholics who long for the more doctrinaire papacies of John Paul and Emeritus Pope Benedict XVI.

The criticism of Francis by conservatives has grown more vocal recently amid the church’s sex abuse scandals and the distress over his opening to letting divorced and civilly remarried Catholics receive Communion. /cbb