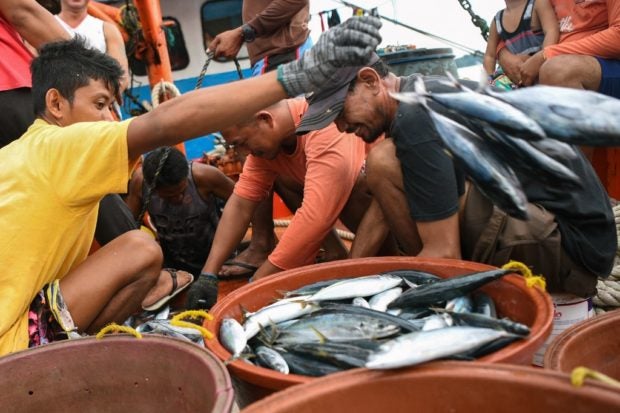 This photo taken on July 5, 2022 shows workers filling containers with a fishing boat’s catch at a port in Masinloc town, Zambales province, after an expedition in the South China Sea. (Photo by Ted ALJIBE / AFP)

MANILA, Philippines — A fisherfolk organization said that the “fuel assistance to fisherfolk” worth P489.6 million included in the Bureau of Fisheries and Aquatic Resources (BFAR) proposed budget for 2023 is insufficient.

The proposal for a P15,000 production subsidy that will settle a fisherman’s fuel costs for two months has been submitted to Congress as House Bill 2024.

It can be recalled that Makabayan legislators have refiled the same, stating that Filipinos who were employed in the fisheries and aquatic sectors, as recorded by the Philippine Statistics Authority (PSA), shall directly receive the amount of P15,000 for production and livelihood expenses.

Apart from the insufficient budget, the group also questioned the allocation of P1.7 billion for the aquaculture sub-program while the capture fisheries sub-program will only receive P355 million.

Arambulo said that BFAR should place more emphasis on traditional capture fisheries which are composed of small, municipal, and subsistence fisherfolk, versus the aquaculture subsection, which is made up of large fishing companies with the resources and finances to run their aqua farms, it added.

The fishers’ group then blamed the “continued decline” in municipal fisheries output on rising production costs, particularly the high cost of fuel, which has forced them to reduce their fishing livelihood.

(Many of the fishermen were forced to cut time off from the previous six to eight hours to four to six hours a day. Even the number of days of fishing has also decreased from an average of five to six days to three days a week. As a result, fishermen’s incomes are falling as their families’ days of hunger increase.)

In the first quarter of the year, the marine municipal fisheries sub-sector reported a 0.9% decrease, or a total unloading of 218.73 metric tons, meanwhile, according to PSA, the sub-share sector’s total fisheries was 22.5%.—Lyka Farillon, Inquirer.net intern