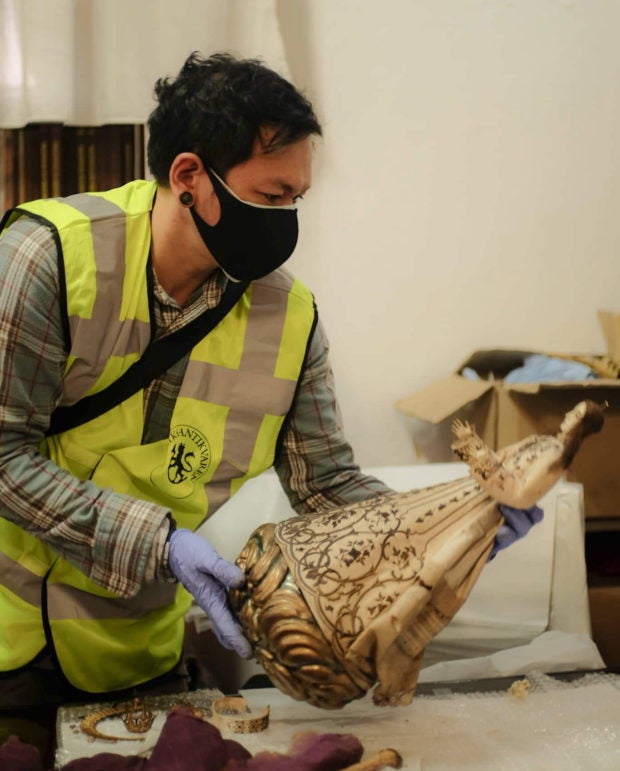 The National Historical Commission of the Philippines has secured artifacts from the Leon and Galicano Apacible Museumin Taal, Batangas —including an image of the Our Lady of the Holy Rosary— as the town and several others remain under threat of an explosive eruption of Taal Volcano. —ROMMEL AQUINO / CONTRIBUTOR

MANILA, Philippines —Senators Imee Marcos and Robin Padilla both wish to see historical artifacts in the hands of the government rather than private collectors.

At Thursday’s hearing before the Senate’s committee on culture and arts, Padilla recalled attending an auction of a letter sent by Philippine hero Andres Bonifacio.

According to his account, a private collector ultimately outbid institutions to get the letter.

(Can it be, for instance, a private individual who bought it but can he display it at the National Museum?)

Marcos hoped that historical artifacts wouldn’t end up in the hands of collectors.

“It cannot go to the private hand sana… If it’s so significant, so pivotal in the career of the artist or significant in the history of the Philippines, kinakailangan mauna ang pamahalaan sa presyong kaya. Kahit bayaran na overtime at ‘wag mapunta sa private collection,” she said.

(Hopefully, it will not fall into the wrong hands. If it’s that important to the artist’s career or to Philippine history, the government should get first rights at a reasonable price. As long as it’s not someone’s collection, we can stagger out the payments.)

(Yes, hopefully, because it is very important. Such a regret.)

However, National Museum Director-General Jeremy Robert Barns clarified that auctions of cultural items are not prohibited as long as they would not be transported outside of the country.

Barns also said that the government does not have the budget to purchase such items.

(No budget to acquire, and no regulation against buying-and-selling historical objects. Sale is legal.)