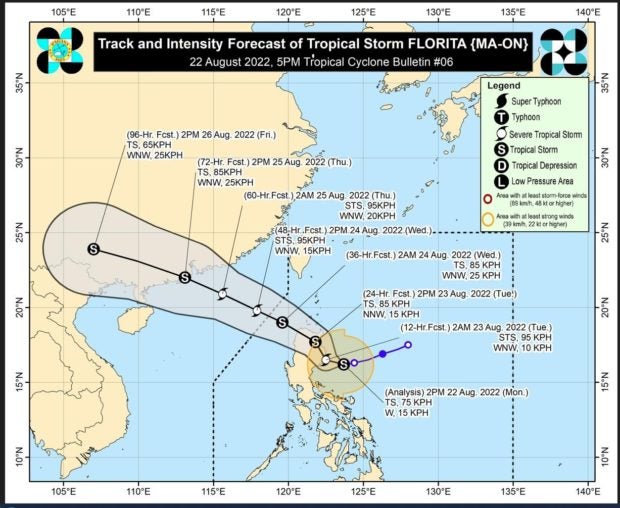 MANILA, Philippines — Severe Tropical Storm “Florita” (international name: Ma-on) is now over the coastal waters of Burgos, Ilocos Norte, as it maintains its strength, the state meteorologist said on Tuesday.

In its 8 p.m. update, the Philippine Atmospheric, Geophysical and Astronomical Services Administration (Pagasa) said Florita was last seen over the coastal waters of Burgos, Ilocos Norte, packing maximum sustained winds of 100 kilometers per hour (kph) near the center with gustiness of up to 165 kph.

Pagasa said Florita is forecast to move west-northwestward throughout the forecast period and may exit the Philippine area of responsibility on Wednesday morning, but is estimated to re-intensify and may reach typhoon category on Wednesday afternoon.

Here are the areas under TCWS No. 3, where storm-force winds prevailing or expected within 18 hours, which could cause moderate to a significant threat to life and property:

Here are the areas under TCWS No. 2, where gale-force winds prevailing or expected within 24 hours that could cause minor to moderate threat to life and property:

Here are the areas under TCWS No. 1, where strong winds are prevailing or expected within 36 hours, which could only cause minimal to a minor threat to life and property: