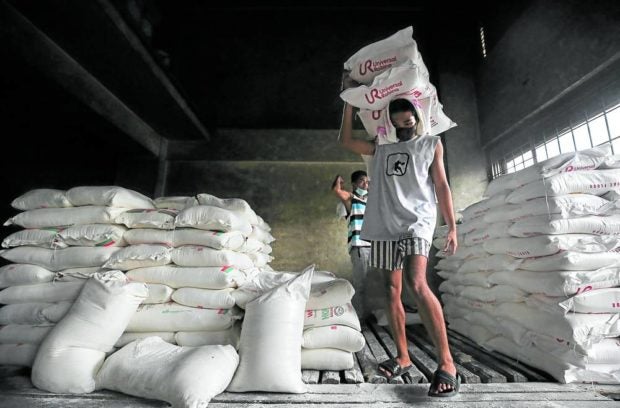 HEAVY BURDEN | Workers haul flour at a bakery supplies warehouse in Pasig City, in this photo taken on July 8, 2022. Bread makers are hurting from rising cost not only of flour, but also of sugar, and will seek an increase in prices. (File photo by LYN RILLON / Philippine Daily Inquirer)

The ex-administrator of the Sugar Regulatory Administration (SRA), Hermenegildo Serafica, for his part, claimed that he did not follow protocol in issuing sugar regulatory orders because he was a “victim of memorandum circular (MC) 1,” which declared all government positions vacant to provide leeway to the new administration to appoint its officials, and did not trust his subordinates.

On Monday’s inquiry by the joint committees on good government and public accountability and on agriculture, chaired by San Jose del Monte City Rep. Florida Robes and Quezon Rep. Wilfrido Mark Enverga, Sebastian told the lawmakers: “I may have misread the intent of the President when I pushed through with deciding on (Sugar Order No. 4 or SO 4) based on the authorization given to me last July 15, 2022,” referring to his delegation as undersecretary for operations and ex-officio SRA chair.

He explained that he was driven to sign the canceled SO 4 because of the “urgency of the situation and based on my interaction with the President during the Aug. 1 meeting. Also on the feedback on the meeting on Aug. 4 Serafica again had with the President, executive secretary, and (former SRA board member Aurelio Gerardo) Valderrama wherein they came up with a sugar importation program that I transmitted to the President.”

“That gave me the inclination of feeling that there is an urgency on this matter and that we need to act as soon as possible,” he said, adding that he sent a memo to the President on Aug. 5 that the SRA board would meet and decide on the order for the importation of 300,000 MT of sugar.

During the inquiry, he also admitted that he never received any approval from the President as concurrent agriculture secretary of the plan to import sugar before he signed and approved the SRA issuance.

Sebastian pointed out, “that’s why when I realized I have misread the intention of the President when he disapproved it, I immediately gave my resignation out of delicadeza and to spare the President of any other issues that have (arisen) because of (SO 4).”

Serafica, on the other hand, maintained that he did not follow protocol in coming up with SO 4, saying that he “felt” that his subordinates in the regulatory body had “breached his trust” after they had disagreements over the coverage of MC 1.

He claimed that he and three deputies and the legal department head of SRA had argued over MC 1 until it was clarified that the circular did not include officials in state-owned firms. One of the three deputies, prior to the clarification, named himself officer in charge of the SRA.

Meanwhile, sugar prices in retail markets are expected to decline to P60 a kilo after authorities started confiscating thousands of sacks of alleged hoarded sugar and supermarkets’ agreeing to sell the sweetener at reduced prices.

Agriculture Undersecretary Domingo Panganiban said it was possible for retail sugar prices to go down to P60-P70 a kilo “within the week” if the government would decide to release and sell sugar confiscated from some warehouses last week.

The Bureau of Customs had found 214,000 bags of sugar or about 10,700 MT as it inspected sugar warehouses in Caloocan City, Manila, Pangasinan, Pampanga, Batangas and Davao.

Panganiban said the government had yet to inspect sugar warehouses in Eastern Visayas and Mindanao.

Refined sugar in Metro Manila is sold at P100 as of Monday, against P50 a year ago, based on the Department of Agriculture’s price monitoring. Brown sugar, on the other hand, retails for P70 a kilo from P44 last year.

About 1.8 million bags of sugar were also secured from Victorias Milling Co. Inc. and Universal Robina Corp. for distribution to supermarkets, which Panganiban said would push sugar prices down.