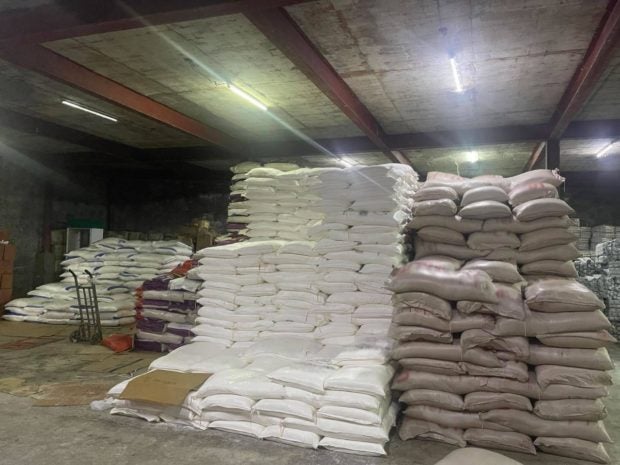 FILE PHOTO A warehouse in Pampanga yielded thousands of sacks of what agents of the Bureau of Customs believe to be hoarded sugar. Image from the Office of the Press Secretary

MANILA, Philippines — The Bureau of Customs on Monday vowed to look into various issues involving sugar importation, including alleged artificial shortage of sugar, recycling of import permits, and smuggling, after several inspections in warehouses yielded thousands more sacks of sugar.

Joint elements of BOC’s Custom Intelligence and Investigation Service (CIIS), Enforcement and Security Service (ESS), and intelligence officers from the military conducted a series of inspections from August 19 to 20, where they discovered sacks of sugar warehoused in Caloocan City, and in Marilao, Bulacan.

Details of the inspection will be referred to the Department of Trade and Industry (DTI) and the Sugar Regulatory Board (SRA) to check for possible violations.

“(These) warehouses contained thousands of sacks of sugar at Caloocan and Marilao Bulacan. They were asked to present necessary documents. Meanwhile, BOC will refer them to DTI and SRA for possible infractions,” BOC said in a statement.

“Immediately, Commissioner Yogi Felimon Ruiz ordered Dir Jeoffrey Tacio to conduct an investigation, (and) clarified that the bureau is still conducting a probe into the modus operandi of unscrupulous individuals behind the sugar smuggling,” the bureau added.

Ruiz, meanwhile, vowed not to let sugar smuggling occur under his watch, especially with a supposed shortage sending prices up.

“We would never allow such modus to happen. I took on this role with complete acceptance of the tall order of guarding the country’s borders against illegal smuggling. We would always bring the same 100% commitment to our jobs,” he said.

Earlier, the bureau also found some 60,000 sacks of sugar during an inspection in a warehouse in Guiguinto, Bulacan, while authorities were still verifying its import permit.

Before that, Customs intercepted in Subic a cargo vessel carrying some 7,000 metric tons of imported sugar from Thailand. BOC said that the Thailand sugar was covered by specific permits but was put on hold by the agency upon receiving derogatory information about the sugar shipment.

Meanwhile, in Pampanga, a raid on a warehouse also yielded thousands of sacks of sugar. Malacañang suspected some unscrupulous traders were hoarding to create an “artificial” shortage of the commodity to ramp up the need for importation.

The illegal importation and hoarding of sugar came to light after President Ferdinand Marcos Jr. voided Sugar Order No. 4 by the SRA — which was signed on his behalf — mandating the importation of 300,000 metric tons of sugar amid an impending shortage.

In rescinding the order, Marcos said that while there may be a need to import sugar, it would be lower than 300,000 metric tons.

The SRA order, which the Palace said was issued without the imprimatur of the President, subsequently resulted in the investigation of SRA officials, including Agriculture Undersecretary for Operations Leocadio Sebastian, who was forced to resign from his post.

Panels in both the House of Representatives and the Senate are currently investigating the issue, with the briefing conducted by the House committee on good government and public accountability and the committee on agriculture and food morphing into a motu proprio investigation.— With reports from Catherine Dabu, trainee