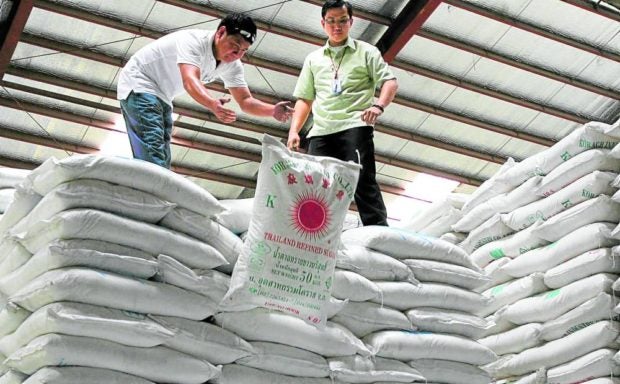 Customs officials in Meycauayan, Bulacan, recently seized P130 million worth of sugar from Thailand. Local farmers and sugar tillers were outraged by the discovery of imported sugar as it will compete in prices with local sugar products in the country. (Photo by MARIANNE BERMUDEZ / Philippine Daily Inquirer)

MANILA, Philippines — Malacañang on Sunday said that the discovery of thousands of tons of sugar stored in warehouses in Luzon has led officials to conclude that the sugar shortage reported by beverage, food, and bread makers was only artificial.

“The huge volume of sugar discovered by authorities in the various inspected warehouses in Luzon has led Malacañang to conclude that the sugar shortage is artificial,” Press Secretary Trixie Cruz-Angeles said in a statement.

The Bureau of Customs (BOC), acting on orders from Malacañang, inspected sugar warehouses in Caloocan City, Manila, Pangasinan, Pampanga, Batangas, and Davao and they found at least 214,000 bags of sugar (about 10,700 metric tons) in some of the warehouses in Luzon alone.

The largest stockpile was found at the Subic Freeport where the Customs Intelligence and Investigation Service (CIIS) seized 140,000 bags (7,000 MT) of refined sugar imported from Thailand.

The CIIS also found that most of the stored sugar they found were imported under import permits that were under Sugar Order No. 3 (SO3), issued by the Sugar Regulatory Administration (SRA) in February.

The CIIS said it was still studying the documentation, but it appeared that some of the import permits were “recycled” from previous importations under SO3.

On Saturday, the CIIS also seized at least 60,000 bags of refined sugar from Thailand from four warehouses in Guiguinto, Bulacan.

At least two of the warehouses were half-full while one warehouse had sacks of sugar neatly stacked up to the roof.

The warehouse caretaker told Customs inspectors that the sugar had just been delivered from the Manila International Container Terminal on Friday evening.

The BOC inspectors also learned that the import permit used for the shipment was also under SO3.

SO3, signed by then Agriculture Secretary William Dar, SRA administrator Hermenigildo Serafica and SRA board member Ronald Beltran, allowed the importation of 200,000 MT of sugar.

Half of that allocation, or 100,000 MT, was meant for refined sugar for retail use and the other half for bottler’s grade sugar for the use of beverage makers.

But Executive Secretary Victor Rodriguez revealed last week that the SRA still has not accounted for 63,000 MT of sugar imported SO3.

Impact on other sectors

A few days before the warehouse inspections, food processors and beverage makers were invited to Malacañang where they complained to President Ferdinand Marcos Jr. about the unavailability of sugar in the market.

Marcos then ordered warehouse inspections and said he would consider allowing food processors and drink makers to import sugar themselves under a special permit from the SRA.

Later, he also allowed the importation of 150,000 MT of sugar, but did not yet make an announcement of allowing manufacturers to import their own sugar, a move that would dramatically increase manufacturers’ profits.

On Saturday, Coca-Cola Beverages Philippines, in a statement, thanked the president for his prompt action on their complaint, but he stressed that the beverage industry would need at least 450,000 MT of premium refined bottler grade sugar in order to reach 100 percent of their production capacity for the year.

Both houses of Congress have said they would begin investigations of the sugar supply problem.

Sen. Francis Tolentino, chair of the Senate blue ribbon committee, said on Sunday the panel will tackle the matter on Tuesday.

“Our investigation will just focus on the proposed measures and on determining if there are [possible charges] that may be referred to the [Office of the] Ombudsman,” he said in a radio interview.

Tolentino also said the chamber’s 17-member antigraft panel will then open on Thursday its probe of the purchase of P2.4 billion worth of laptops for the Department of Education.

Tolentino stressed that his committee would respect the rights of the individuals who were summoned to appear in their investigation, among them the former SRA officials who resigned over the controversy.

Palace: Biggest supermarkets in PH commit to sell sugar at P70 per kilo