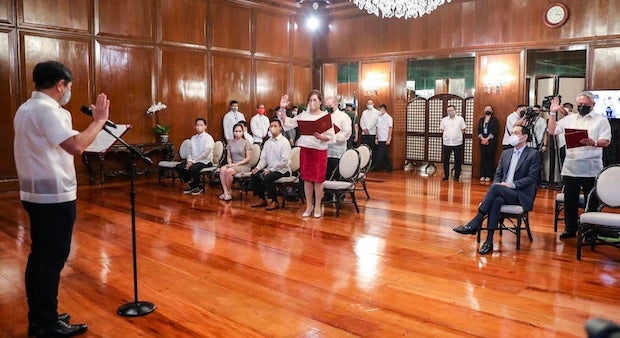 President Ferdinand Marcos Jr. administered the oath of office of the new members of the Sugar Regulatory Administration on Monday, Aug. 22, 2022, in Malacañang. (Photo from his Facebook account)

MANILA, Philippines — The new members of the Sugar Regulatory Administration (SRA) took their oath of office before President Ferdinand “Bongbong” Marcos on Monday in Malacañang.

Marcos had appointed the new members a part of his revamp of the SRA after some of its former officials got shown to have issued an order to import sugar without his authorization.

“We thank the new officials of the Sugar Regulatory Administration who have promised to sincerely do their duties for the good of the country,” Marcos said in Filipino in a Facebook post. “We are confident that with the new SRA members we will overcome any challenge that we will face in the sugar industry.”

Following the oath-taking, Marcos met with the new SRA members to brief them on the administration’s steps in securing the sugar supply.