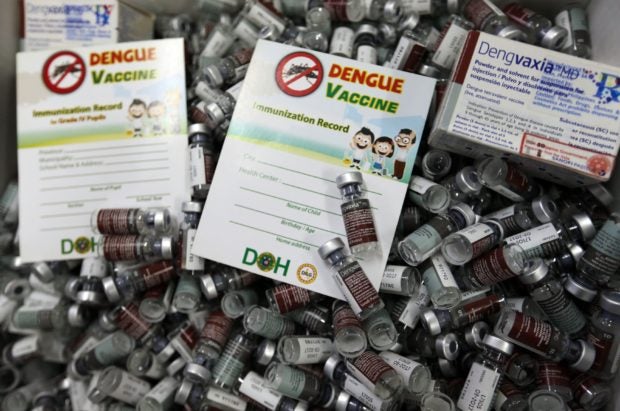 MANILA, Philippines — In light of the continuous rise of dengue cases in the country, the Department of Health (DOH) officer-in-charge Maria Rosario Vergeire on Friday said the agency is reviewing different kinds of vaccines available for dengue.

Dengvaxia, on the other hand, needs to apply for a certificate of product registration (CPR) from the Food and Drug Administration, according to Vergeire.

Dengvaxia’s vaccine license was revoked after being linked to the deaths of several children, according to Vergeire.

“In order for us para magamit ang bakuna na ito, kailangan (to use this vaccine) the manufacturers will undergo or go through these processes of applying for the CPR and then kailangan ma-evaluate ulit ng ating (it has to be evaluated by) health technology council,” Vergeire said of the dengvaxia vaccine.

“But while waiting for that, of course, the Department of Health, together with our experts, are already reviewing the different vaccines available against dengue,” she added.

Vergeire noted that Dengvaxia’s CPR was revoked due to non-compliance with the requirements of the FDA.

In late 2017, the DOH halted its massive anti-dengue immunization program using Dengvaxia after its manufacturer Sanofi Pasteur said patients who got vaccinated but had no prior exposure to the virus could suffer severe symptoms.

The Public Attorney’s Office filed complaints against health officials for the deaths of children allegedly caused by the anti-dengue vaccine, which is being widely used in other countries worldwide.

But in January 2019, DOH said no death was confirmed to have been directly caused by Dengvaxia.

Meanwhile, nine out of 17 regions have reported an increase of dengue cases in the country, according to Vergeire. She didn’t elaborate on which regions were included.

Read Next
US to train prosecutors, police to enhance handling of criminal cases
EDITORS' PICK
Percy Lapid’s kin: ‘We demand that his cowardly assassins be brought to justice’
Nothing’s certain so here’s how everyday Filipinos can make the most out of their Plan B
Do all the things you do, faster
PNP vows to bring justice for slain Percy Lapid; says probe underway
House energy committee chair Arroyo bats for cheap electricity
‘Seniority’ requirement despite vacant posts in DOH bothers senators
MOST READ
Student stabs teacher dead in Samar town
Trixie Angeles quits as press secretary due to health reasons
Not rehired?: Trixie Angeles not on list of reappointed Cabinet execs
Heart Evangelista to stay abroad ‘indefinitely’: ‘Hindi muna ako babalik’
Don't miss out on the latest news and information.