LPA east of Luzon may intensify into tropical cyclone 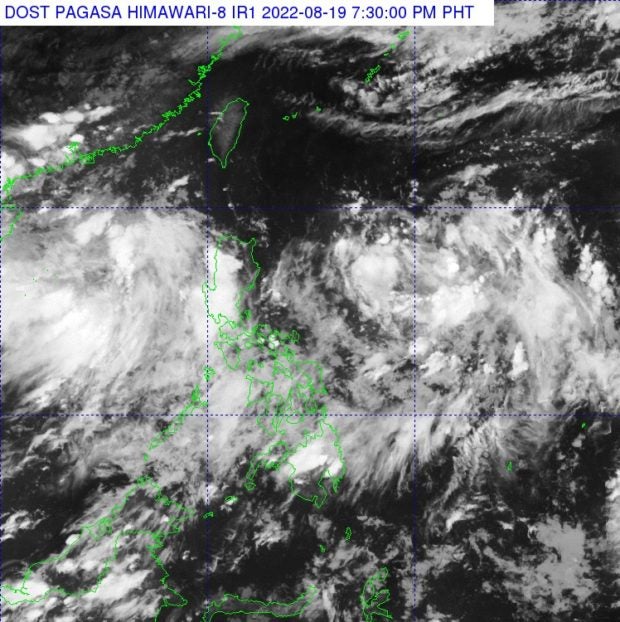 Thick clouds can be seen on the country’s eastern side, where the low-pressure area (LPA) – which Pagasa says may develop into a tropical cyclone – is currently located. Cloud bands on the western side, meanwhile are brought by the southwest monsoon (Satellite image from Pagasa)

MANILA, Philippines — A low-pressure area (LPA) east of Luzon, which causes cloudy skies over the Bicol Region and Eastern Visayas, is being monitored by the state weather bureau as it may intensify into a tropical cyclone.

As of now, the trough of the LPA brings rains over Bicol and Eastern Visayas, while the southwest monsoon or habagat is responsible for the isolated showers and thunderstorms over the western parts of Luzon like Central Luzon and Metro Manila.

However, the weather over Central Luzon and Metro Manila is expected to improve over the weekend, with only Calabarzon being affected by the cloudy skies.

Overall, Pagasa’s three-day forecast showed that weather in Metro Manila would generally be fair for Sunday and Monday, but rain showers and thunderstorms may resume by Tuesday as the southwest monsoon gets intensified by the LPA.

Similar scenarios are expected over Baguio City, while Legazpi and Cebu would still experience rains from Sunday to Tuesday due to the LPA.

But as of now, Pagasa said that no gale warning had been raised in any part of the country, as sea conditions remain slightly moderate.