US to train prosecutors, police to enhance handling of criminal cases | Inquirer News

US to train prosecutors, police to enhance handling of criminal cases 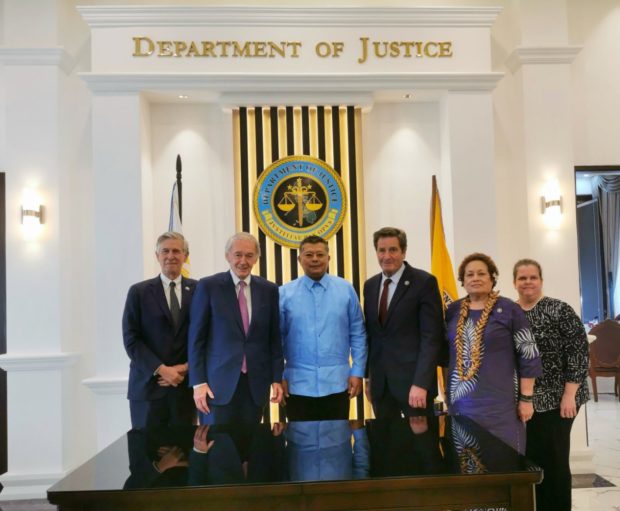 Justice Secretary Jesus Crispin Remulla with US officials led by Senator Edward J. Markey met Thursday in Manila and talked about cooperation regarding programs for transparency and human rights. Photo from DOJ-PIO

Clavano said the US support for prosecutors and the police were among the discussions during the meeting between US Senator Edward J. Markey and Justice Secretary Jesus Crispin Remulla.

“Yesterday, there was a very good discussion on how US Senator Markey and his congressional delegate could help us in our programs to further transparency, further human rights,” Clavano said.

“And the Secretary was very receptive to the suggestions of the good US senator,” he said.

Earlier, Remulla has been pushing for retraining police officers, particularly on investigations and case build-up, aiming to increase the government’s conviction rate.

Read Next
DepEd plans to revive anti-corruption committees
EDITORS' PICK
Percy Lapid’s kin: ‘We demand that his cowardly assassins be brought to justice’
Nothing’s certain so here’s how everyday Filipinos can make the most out of their Plan B
Do all the things you do, faster
PNP vows to bring justice for slain Percy Lapid; says probe underway
House energy committee chair Arroyo bats for cheap electricity
‘Seniority’ requirement despite vacant posts in DOH bothers senators
MOST READ
Student stabs teacher dead in Samar town
Not rehired?: Trixie Cruz-Angeles not on list of reappointed Cabinet execs
Final net satisfaction rating slightly decreases for Robredo, Sotto — SWS
Heart Evangelista to stay abroad ‘indefinitely’: ‘Hindi muna ako babalik’
Don't miss out on the latest news and information.