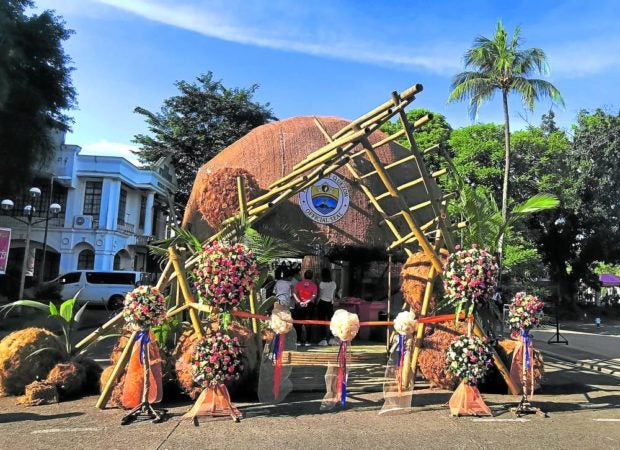 LUCENA CITY, Quezon, Philippines — The Niyogyugan Festival in Quezon province has been scrapped this year so it can be refocused to improve the lives of local coconut farmers, Gov. Angelina Tan said.

“We will be recalibrating some changes in next year’s Niyogyugan Festival,” Tan said in her speech at the opening ceremony of Quezon Day 2022 on Wednesday.

Tan hinted that the planned transformation would focus on the purpose of the celebration, where the province’s coconut industry takes center stage.

The governor, on her Facebook page, said in Filipino: “The festival should not be all about celebrations which have no clear benefits to our coconut farmers.”

“But where is the improvement in the lives of our coconut farmers in Quezon? Why are those who depend on coconut farming, the primary industry of our province, as their livelihood still living in poverty?” she said.

Tan, however, recognized the contributions of the annual festival to the growth of tourism in the province.

In an interview with local reporters, she also said the provincial government had no sufficient budget and time to prepare to hold the festival this year.

The Niyogyugan Festival, first held in 2012, was conceptualized by former Quezon Rep. Aleta Suarez, wife of Danilo, to highlight the coconut, also known as the “tree of life.” “Niyogyugan” is coined from the words “niyog” (coconut) and “yugyog” (to shake or dance).

LOCAL FARE | Booths set up in front of the Quezon provincial capitol in Lucena City offer native food and products unique to the province’s 39 towns and two cities as the province celebrates Quezon Day through activities spread out in five days, including the commemoration of the birth of former President Manuel L. Quezon on Aug. 19. (Photo by DELFIN T. MALLARI JR. / Inquirer Southern Luzon)

The event aims to contribute to the cultural and historical development of the province, and also promote tourism and locally produced coconut products.

The festival was canceled in 2014 after Typhoon Glenda (international name: Rammasun) devastated coconut farms in the province. The event was also not held in 2020 and 2021 due to the COVID-19 pandemic.

In 2016, the festival was named by the Department of Tourism as the “destination of the year” in Calabarzon (Cavite, Laguna, Batangas, Rizal and Quezon) region.

Tan on Wednesday also led the opening of the “tagayan” booth, where guests take a swig of “lambanog” (coconut gin) inside a coconut-inspired pavilion set in front of the provincial capitol and Perez Park.

Maria Cristina Diasanta-Decal, a Quezon-based restaurateur and heritage conservationist, said the booth represented the indigenous custom of welcoming guests in the province by offering them a shot of lambanog.

Among the activities for the Quezon Day celebrations from Aug. 17 to Aug. 21 are agritourism fair, Quezon coconut farmers’ summit and “cocolympics,” art and photo exhibits, on-the-spot painting contest, competitions in songwriting and singing, and film viewing.

Other events are the commemoration of the birth of former President Manuel L. Quezon on Aug. 19, and the launching of the Niyogyugan Festival Committee for 2023.