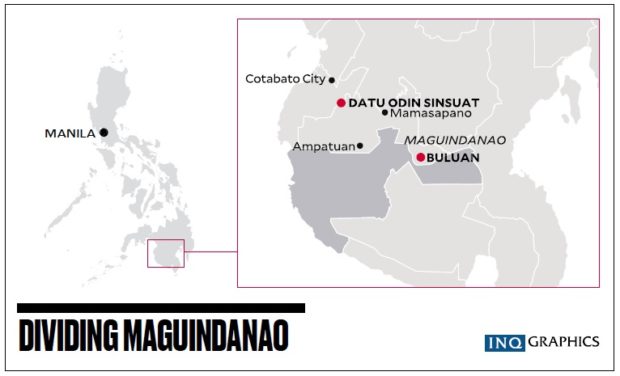 COTABATO CITY, Maguindanao, Philippines — The Commission on Elections (Comelec) has set Sept. 17 as the schedule for a plebiscite to decide on the question of splitting Maguindanao into two provinces.

Comelec Resolution No. 10797 set the election period from Aug. 16 to Sept. 24 during which a gun ban is imposed throughout the province.

Police have started laying down security plans to ensure that the political exercise would be peaceful and orderly.

Before leaving his post as regional police director in the Bangsamoro Autonomous Region in Muslim Mindanao, Brig. Gen. Arthur Cabalona ordered the Maguindanao police to strictly implement the gun ban.

Under Republic Act No. 11550, which was signed into law by then President Rodrigo Duterte on May 27, 2021, the plebiscite schedule should have been September last year, but the Comelec called off the exercise due to conflict with the preparations for the May 9 general elections.

With a month to go before the plebiscite, no group has so far campaigned for the rejection of the law.

Officials of Maguindanao have appealed to all registered voters to come out and vote on Sept. 17, saying the law, when ratified, will boost the delivery of services to some 1.7 million people in the province.

“It is best for the future of the province if you come out and vote, whether ‘yes’ or ‘no,’ it is your right to decide,” lawyer Cyrus Torreña, Maguindanao provincial administrator, said in a radio interview.

Rep. Bai Dimple Mastura of Maguindanao’s first congressional district also campaigned for ratification. She said that once the new province is created, people would no longer travel far in order to seek assistance from the provincial government.

She said more government projects would be realized since the new province would cater to a lesser number of towns.

“Everybody benefits from this law because it will surely make the delivery of government services faster, quicker and more efficient,” Torreña said.

A resident of Datu Odin Sinsuat, Abdilla Kadiguia Abdulbasit, said he had not heard of any group or individual who openly campaigned against the province’s split.

“In the absence of groups or persons pushing for a ‘no’ vote, then Maguindanao will be divided beginning Sept. 18,” he said, noting that he would vote to ratify the law.

The move to divide Maguindanao dates back to 2006 through the Regional Legislative Assembly of the then Autonomous Region in Muslim Mindanao (ARMM), with the new province named Shariff Kabunsuan in honor of the Malay preacher who introduced Islam in central Mindanao.

Although the measure was unanimously ratified, the Supreme Court in 2008 shot it down as unconstitutional as only Congress had the power to create provinces.

The split in 2006 was engineered by the Ampatuan clan who held sway in Maguindanao and the ARMM government during that time. It was to ensure the family’s complete hold of a political turf with little resistance during the elections.

During the Ampatuan reign in the province from 1995 to 2009, the provincial capital was transferred from Sultan Kudarat town to Maganoy (now Shariff Aguak) where a P218-million complex was built.

When Esmael Mangudadatu became governor in 2010, at the cost of losing his wife in the 2009 Maguindanao massacre, he refused to hold office in Shariff Aguak, setting up a satellite office in Buluan town.

Mangudadatu soon built a P500-million capitol there that was inaugurated by Duterte in 2019.

Maguindanao is the heart of the once vast Empire Province of Cotabato which included what are now Cotabato, South Cotabato, Sultan Kudarat and Sarangani provinces, and the highly urbanized city of General Santos.

If the law is ratified, the incumbent governor and vice governor of Maguindanao will each rule over the new provinces. The members of the provincial board elected in May will continue to serve as such but to the new province where their old legislative districts now belong.

President Ferdinand Marcos Jr. will have to appoint additional members to fill in the seats left vacant by succession.