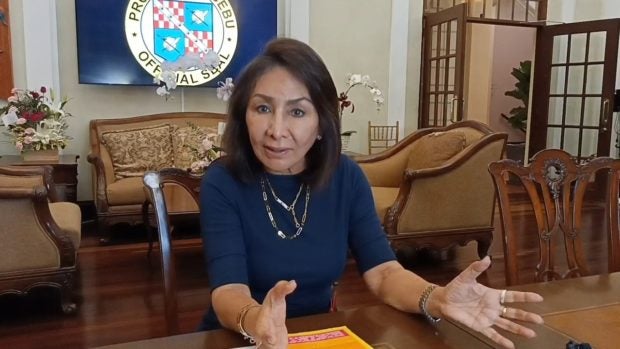 CEBU CITY, Cebu, Philippines — Cebu Gov. Gwendolyn Garcia has stopped the construction of more floating and fixed cottages in established easement zones in Cordova town on Mactan Island to avoid what she described as a “marine disaster.”

Garcia, in an executive order issued on Aug. 9, said the existing cottages, which already reached more than 300 as of this month, have been operating without toilets, with its owners failing to secure the necessary permits or clearances from the local government.

“This is a time that we all collaborate because we are trying to preserve the waters of Cordova so it can continue to be a tourist destination,” said Garcia, in a report by Sugbo News, the web-based news service of the Cebu provincial government.

“The way this is going, in about a matter of time, this will practically be killing the goose that lays the golden egg. This is also a marine disaster waiting to happen. If the fish are affected, the primary means of livelihood in the municipality will be gone,” she added.

The governor’s order said the cottages were built along the established easements in violation of Presidential Decree No. 1067, or the Water Code of the Philippines, and Cebu Provincial Ordinance No. 2021-01, Cebu’s Water Code.

On Monday, Cordova Mayor Cesar Suan announced that the level of coliform bacteria in the town’s waters had increased, citing the findings of the Environmental Management Bureau (EMB) of the Department of Environment and Natural Resources.

“The result of the EMB inspection showed that our seas were no longer safe for swimming,” he said.

Based on the water test conducted by the EMB in the past two months, the coliform level in the waters of Cordova reached 1,300 most probable number (MPN) per 100 milliliters.

For bodies of water to be safe for swimming, the coliform levels should only be at 100 MPN per ml.

She said she would issue an executive order calling on the Philippine Navy, the Philippine National Police, the Maritime Industry Authority and the Philippine Coast Guard to immediately enforce her order, and ensure that there would no longer be additional construction of cottages in the waters of Cordova.

According to Garcia, Suan sought her help on the unregulated floating and fixed cottages that have been sprouting like mushrooms along the town’s shores.

To address the matter, the governor brought up the idea of preparing a relocation site for cottage operators, who will be given cash assistance.

“What is the solution? You know we are going to stop their livelihood. They will no longer be earning. Now for how long? What is in store for them? That is what needs to be answered so that they can be convinced that this is really after all for the greater good and for the future,” Garcia said.

She, however, did not say how much would be given to affected cottage owners and when the assistance would be released.

“This is a good beginning. We will address this challenge step by step,” Garcia said.