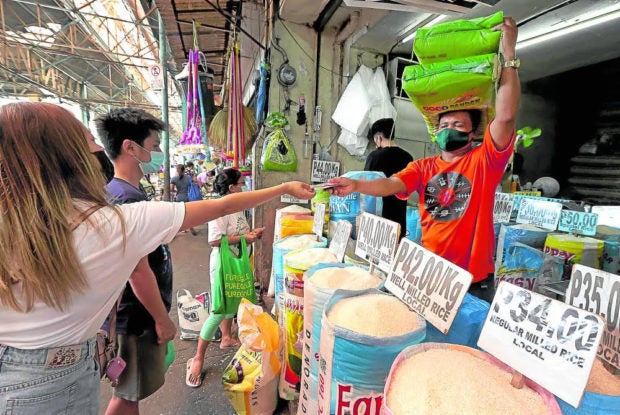 FILE PHOTO: Bringing down the price of rice, which costs at least P34 a kilo in this stall at Marikina City public market, is among the challenges the incoming Marcos administration must tackle. —GRIG C. MONTEGRANDE

MANILA, Philippines—The Rice Tariffication Act (RTA) was signed in 2019 to reduce the price of rice and supposedly help farmers who would be hurt by the removal of quantitative restrictions on imported rice.

The National Economic Development Authority (Neda) had said that the law addressed the needs of consumers for low-cost rice, while assisting farmers through the Rice Competitiveness Enhancement Fund, which was supposed to generate excess tariff income for programs to help farmers.

But why are farmers now demanding a repeal of the law, which former Socioeconomic Planning Secretary Karl Kendrick Chua had described as the “best model that we have to help both farmers and consumers”?

Last Wednesday (Aug. 10), the National Movement for Food Sovereignty (NMFS) and the Alliance for Resilience, Sustainability and Empowerment (Arise) launched a campaign to amend and then finally repeal the RTA. 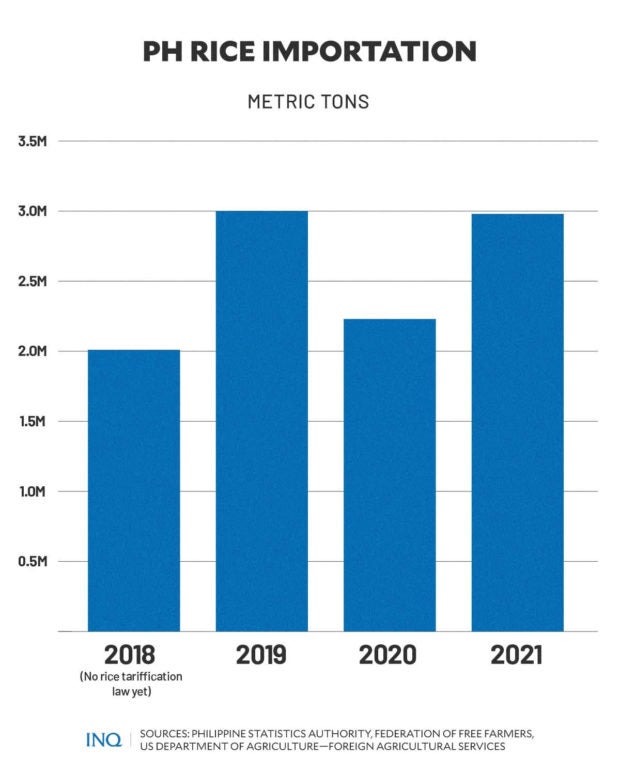 NMFS and Arise, groups that envision sustainable, resilient and empowered communities, said that three years since the law was passed, “our domestic market has now been flooded with imported rice.”

But in 2019, as the country beat China as the world’s biggest rice importer with three million metric tons, palay prices went down to as low as P12 a kilo from P19 to P20 a kilo in 2018. 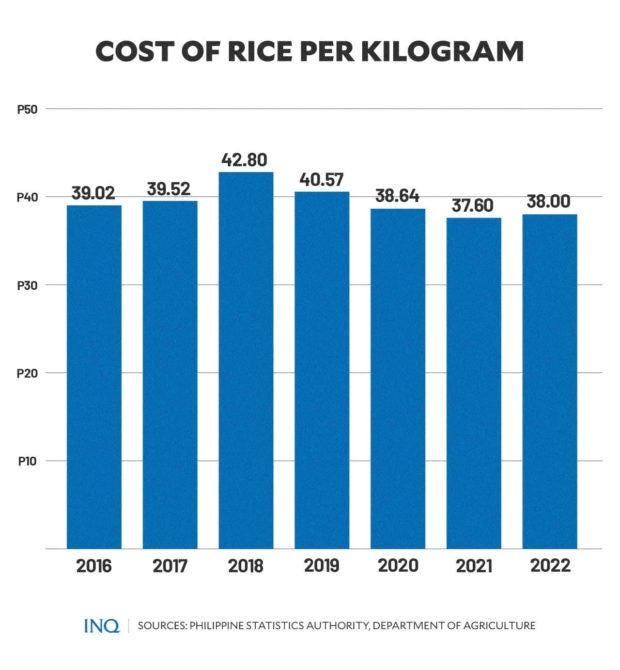 The United States’ Department of Agriculture-Foreign Agricultural Services had said that the increase in the volume of imported rice was because of the enactment of the RTA, which paved the way for the entry of more imported rice.

Republic Act No. 11203, which was signed by then President Rodrigo Duterte on Feb. 14, 2019, replaced quantitative restrictions—a ceiling on volume—on imported rice with tariffs of 35 to 40 percent.

Back in 2019, while the Philippine Statistics Authority (PSA) said that the average price of regular milled and well-milled rice had already gone down to P37.22 and P41.89 a kilo, the average farm gate palay price fell to an eight-year low.

NMFS and Arise said farmers had already warned of the dire consequences of the RTA, stressing that commercial traders have been able to import rice even without permit from the National Food Authority (NFA).

This, as the law required commercial traders only to comply with the sanitary and phytosanitary regulations of the Department of Agriculture (DA), which is needed for the issuance of import clearance. 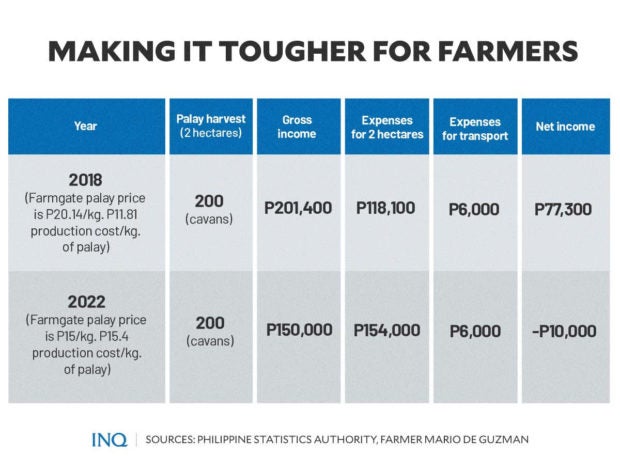 Mario de Guzman, a farmer in Cagayan province, told INQUIRER.net that this year, while he is yet to harvest his crops, with a P15 a kilo farm gate palay price, he could expect nothing but losses.

“Now that I have not yet harvested my hybrid palay, I already had P154,000 in expenses for two hectares. Then during the harvest, I would need to pay P30 per cavan for caretella service,” he said, referring to a mode of transporting his harvest.

When the RTA was signed, the NFA’s role was reduced to one that maintains 15 to 30 days buffer stock of rice from palay bought from local producers. This is for emergencies, like disasters.

The problem, however, is that the NFA was given only P7 billion in funding this year, which is only enough for 6-day buffer stock. The “optimum” buffer stock is 120 days, but the required budget is P139 billion.

Former Agriculture Secretary William Dar had said that if the government increased the budget for buffer stock, P27 to P30 per kilo of rice for the “poorest of the poor” would be possible.

Based on Teodoro Mendoza (PhD)’s “An Analysis of RTL”, a 60-day buffer stock is “more practical” as the budget required—P69 billion—can buy about 3.15 million tons of palay.

NMFS and Arise said this was about 28 percent of the harvest for the wet (main) season and that this level could allow the NFA to effectively stabilize the farm gate palay price at P22 a kilo.

RELATED STORY: Return of NFA rice for the poor eyed, but seen as tariffication failure

They said the food crises, mirrored by rising food costs, higher prices of farm needs, and the massive income losses experienced by farmers affected by the liberalization, continued to escalate.

“Hence, the call to amend and even repeal the Rice Tariffication Act has become more urgent to protect and secure [the] food and livelihoods of people,” NMFS and Arise stressed.

One of the proposals was to reinstitute the sole authority of the NFA to import rice and regulate imported rice entry into the domestic market, which the RTA removed.

Should Congress decide to amend the RTA, NMFS and Arise said that the NFA’s authority to issue permits and licenses and conduct surveillance and monitoring of the domestic rice market should be “reinstituted.”

This, as a simulation exercise done by the Philippine Institute for Development Studies, a government think-tank, showed that as early as 2015, the impact of rice tariffication showed that palay prices would fall alongside the entry of imported rice. 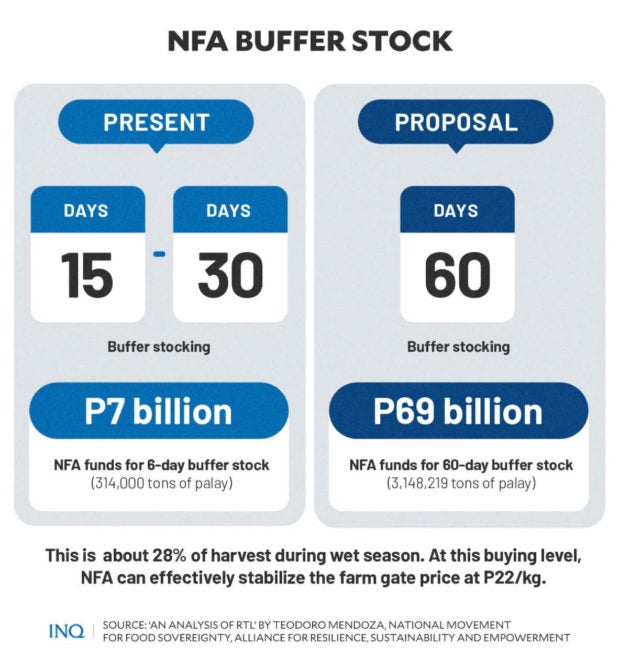 NMFS and Arise said the NFA should investigate the volume and schedule of rice imports, the prices of palay and rice in the domestic market, and the inventory of rice warehouses to identify any predatory and monopolistic practices.

It should also “recommend for prosecution and judicial action traders found engaged in these” and that new warehouses, drying, milling and transportation facilities should be installed.

Likewise, the groups said imported rice should be taxed 180 percent to discourage commercial traders from importing rice during the wet (main) season.

One of the promises of the RTA is the availability of low-cost rice in the domestic market, but this did not materialize. Instead, rice prices remained high at P39 to P50 a kilo, registering a minimal decline of about P1.50 a kilo from its 2018 to 2019 price.

“Bereft of its previous function of stabilizing rice prices, NFA could no longer sell rice at P27 a kilo. Thus, it would not be surprising to say the least that RTA has not benefited the poor and the Filipino rice consumers, in general,” NMFS and Arise said.

RELATED STORY: Winners and losers from the rice tariffication law

FFF had stressed that prices in the first three years of the RTA “practically matched, on the average,” 2016 and 2017 prices.

It said that while rice prices dropped by as much as P7 a kilo from the 2018 peak of P42.80 a kilo, this was not solely because of the RTA, because even before the law took effect in 2019, prices had already gone down with the arrival of emergency imports.

“Our economic managers are being intellectually dishonest by limiting their comparison to prices in 2018, knowing that prices then were abnormally high due to the rice crisis,” FFF said.

NMFS and Arise also said that even as 3.5 million farmers lost their incomes from palay, the RTA allowed big rice traders and importers to expand their profits at the expense of farmers and consumers suffering from the impact of high rice prices during the pandemic.

Former Finance Secretary Carlos Dominguez said that in the first three years of the RTA, at least P46.6 billion was generated in tariff income. 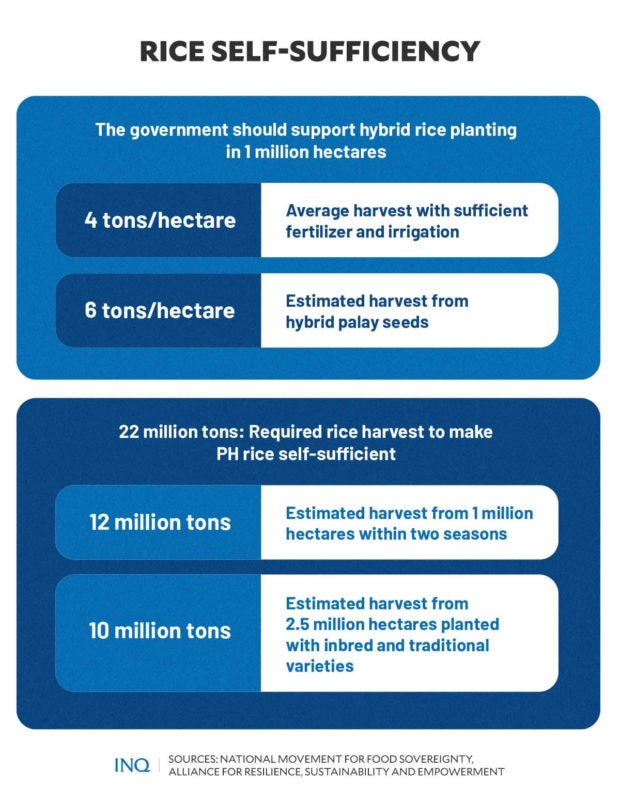 Based on data from the DA, since the implementation of RCEF, more than one million rice farmers have received over 8.6 million bags of certified inbred rice seeds, which resulted in over 830,000 hectares of palay farms now yielding more rice than before.

However, FFF president Raul Montemayor said “this is just one side of the picture,” stressing that the RTA opened up the domestic market to excessive imports and precipitated a severe fall in palay prices, causing P66 billion in losses to farmers.

This, as farmers, like De Guzman, were complaining about the high production cost of palay, especially amid relentless fuel price hikes, which had cost De Guzman P64,000 for 800 liters of diesel.

NMFS and Arise said a minimum support price should be set at P22 a kilo to allow farmers to realize a decent income. Aside from this, farmers should receive a price subsidy, like on fertilizers, which should be at least 60 percent of the total quantity needed by each farmer.

“Farmers’ cooperatives or associations should be allowed to import fertilizer directly from supplier[s] in the international market with government guarantee to ensure cheaper fertilizer prices.”

NMFS and Arise stressed that the government should immediately distribute free farm inputs, like seeds and fertilizers, to more than 3.5 million rice farmers in the country to ensure an increase in farm harvest in the next cropping season.

“The target is to increase overall palay yield to 22 million tons annually to ensure rice self-sufficiency. To achieve this, the government should support hybrid rice planting in 1 million hectares.”

But while Congress is in the process of reviewing or amending the RTA, the following immediate actions should be considered:

NMFS and Arise said that the government should ensure that farmers fully recover their losses and that the Filipino people will have food security in times of uncertainties and global risks.

“It is imperative that the government should be able to take its rice sector out of free trade agreements and to repeal laws such as the RTA, which “only sees rice and agriculture as another commodity for profit extraction.”