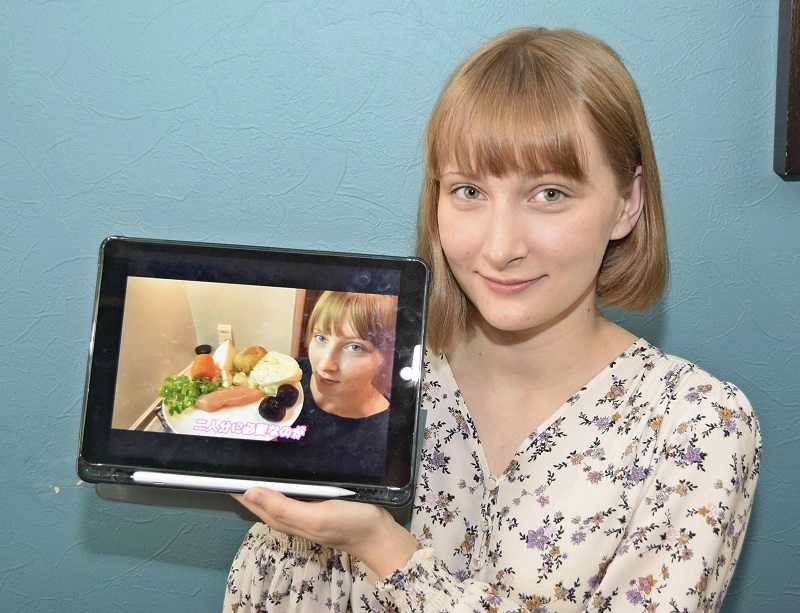 Valeriia Savenko shows a video she posted on YouTube in Shinjuku Ward, Tokyo, on July 28. The Yomiuri Shimbun

TOKYO — In a video posted on YouTube, Ukrainian student Valeriia Savenko introduces herself in Japanese and explains how to make beetroot soup known as borscht in her homeland.

Savenko, 21, fled to Japan after the Russian invasion of her country. She posts videos on YouTube and studies Japanese at the KAI Japanese Language School in Shinjuku Ward, Tokyo.

Born in Chernihiv in northern Ukraine, Savenko became interested in Japanese culture after watching Japanese anime when she was 15. She dated a Japanese student at her university in eastern city of Kharkiv, and in January this year she began live-streaming herself playing “Ghost of Tsushima,” a game set in Japan during the Kamakura period (late 12th century to 1333).

In mid-February, with the Russian invasion looming, Savenko fled with her boyfriend to the nearby country of Georgia. As the invasion began and the Russian military took over the Chernobyl nuclear power plant, she decided to evacuate to Japan.

“I thought it would be dangerous unless we went far away,” she recalled.

Savenko came to Japan at the end of March, and began studying at the KAI school in early May. She had no one to rely on in Japan except her boyfriend, but school president Hiroko Yamamoto, 64, helped her find a place to live.

The school’s classes are free thanks to an aid organization’s support program for Ukrainian students. Savenko also receives supportive comments from Japanese viewers of her YouTube channel. She said she never thought she would receive such strong support in Japan.

Her hometown Chernihiv was surrounded by Russian troops at the beginning of the invasion. She has confirmed that her family is safe, but said she was overwhelmed by shock as her town and Kharkiv were destroyed by missile attacks and artillery shelling.

It was only after arriving in Japan that Savenko began posting videos about Ukrainian culture on YouTube.

Although her English-language skills are much stronger, she tries to present her videos in Japanese as much as possible. Savenko said she studies Japanese because she wants to live in the country and help Ukraine.

“I want to express my gratitude to the people of Japan and be a bridge between Ukraine and Japan,” Savenko said.

Fellow KAI student Mariia Novytska, 25, is also from Ukraine. A lover of animals, she is a qualified veterinarian. Russia’s invasion began while she was training at a veterinary hospital in Kyiv.

Novytska came to Japan at the end of May with the help of a support group for students from Ukraine. She was put in touch with the group by her 26-year-old sister, who works at a broadcasting station in Tokyo.

“I’d always wanted to come to Japan, but I never thought I’d do it this way,” Novytska said. Although it is nearly six months since the invasion started, she said it does not feel real, as if time is standing still.

Her Japanese still needs work, but Novytska is determined to learn to speak it as soon as possible and repay Japan for its support.

Novytska has four hours of classes every day, and spends at least another two hours doing homework. She showed this reporter a notebook in which she has repeatedly practiced kanji she has learned.

The number of evacuees from Ukraine reached 1,701 as of Aug. 7. Some came to Japan through study-abroad assistance programs, with about 40 using the program offered by Pathways Japan, a general incorporated foundation in Chiyoda Ward, Tokyo.

People who meet certain eligibility requirements, such as experience studying the Japanese language, can receive support for travel expenses to Japan and for tuition fees at colleges and Japanese language schools that have a partnership with Pathways Japan.

Eighteen universities, including International Christian University and Sophia University, had joined the program as of Aug. 8. The partnership also includes 26 Japanese language schools, such as the KAI Japanese Language School.

Pathways Japan aims to accept about 70 students at universities and about 100 students at Japanese language schools.