Imports’ continuing impact on PH farmers: Like dislocating the kneecaps 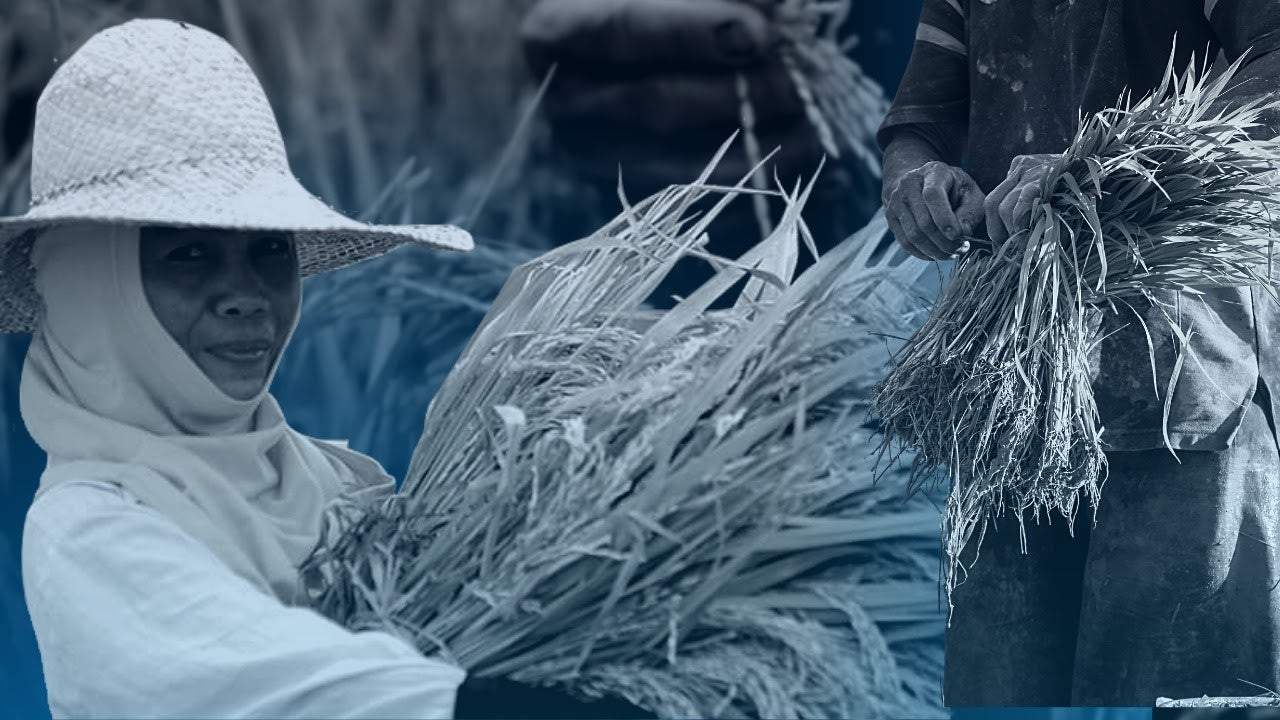 MANILA, Philippines—There’s something wrong when Filipino farmers spend more on producing palay but end up earning next to nothing. Many of them are pointing their fingers at what they said was the main source of their hardship—rice importation.

Jose Vidal, a farmer in San Jose, Occidental Mindoro, told INQUIRER.net that because the cost of production grew, “we almost have nothing left for us.” This was the reason he said a rise in farm gate prices could help them. 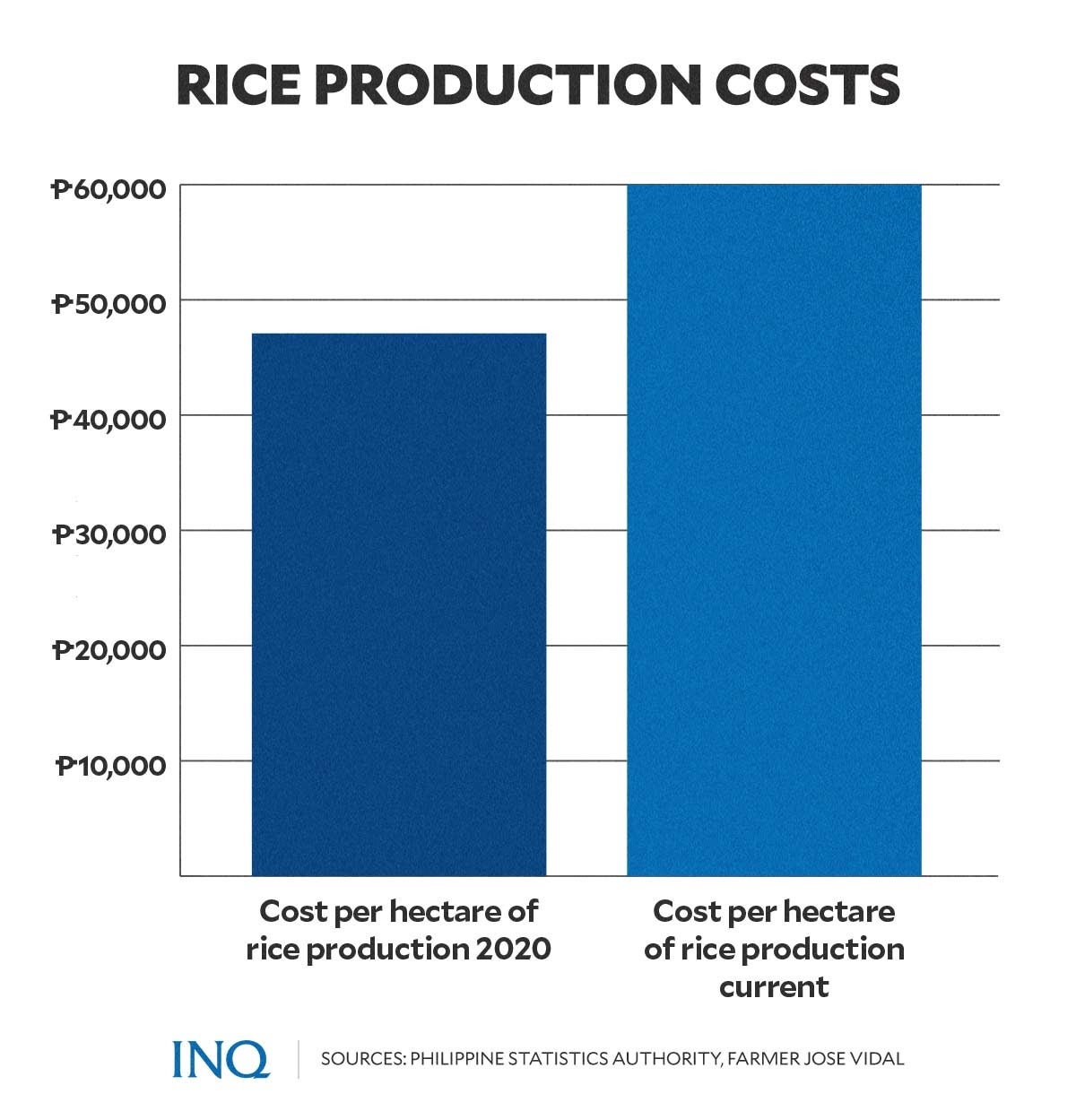 “The cost of production is high and it’s possible that we will even have nothing left for us since we also have debts to pay. That’s why we’re really asking the government for help,” said Vidal.

However, the Federation of Free Farmers (FFF) said it was possible for farm gate prices to fall further—by at least P1 per kilogram in March, April and May—dry season harvest—as a result of excessive rice importation. 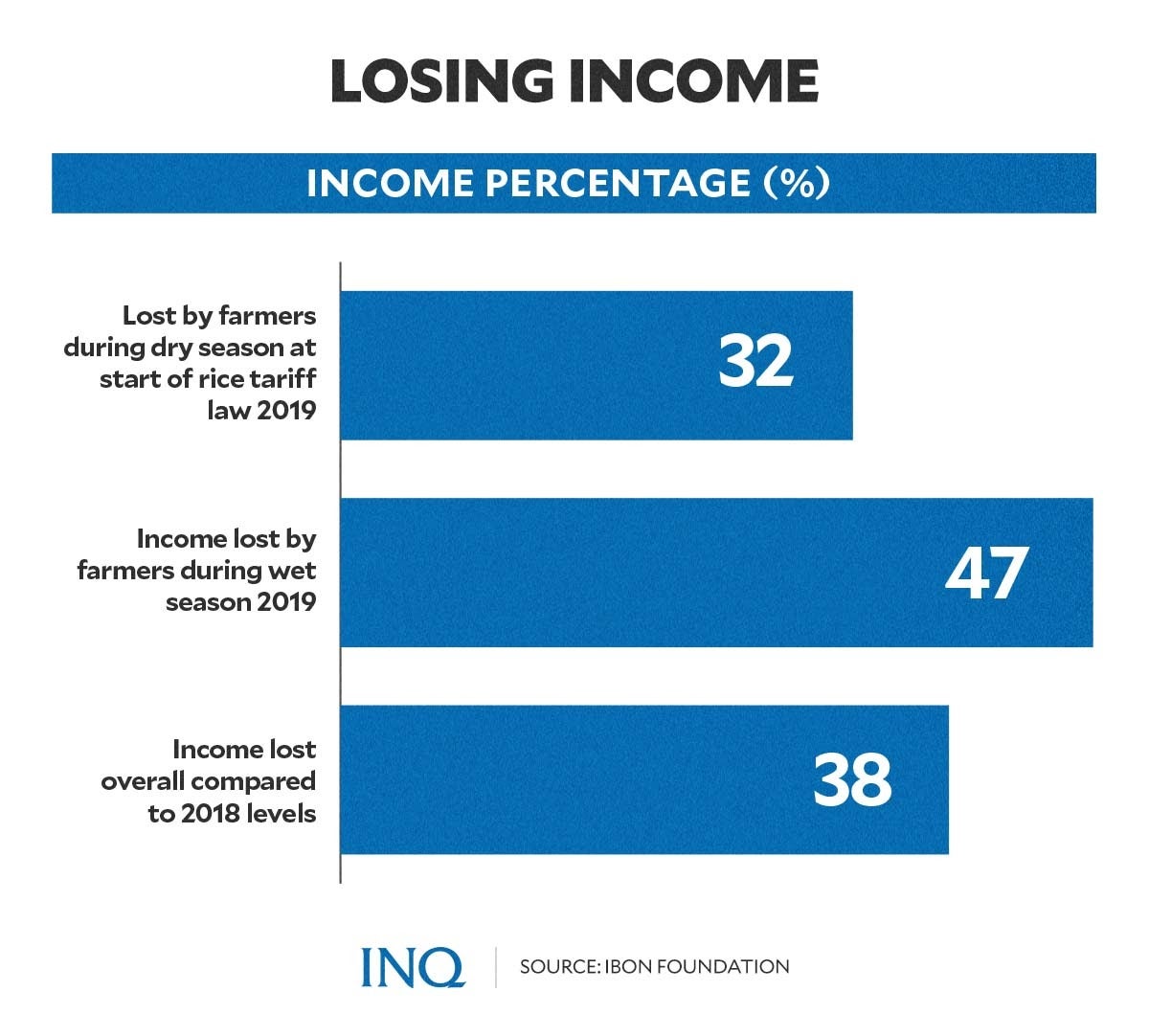 Raul Montemayor, national manager of FFF, said “when we have a peak harvest by yearend like last year––October, November and December––we really have an excess and then there’s a lot of rice imports, too.”

“When we entered 2022, we had a lot of stocks that were way more than the requirement. Now, if there will still be rice imports until March, when Filipino farmers will harvest their crops, markets are already filled with rice,” he said.

He told INQUIRER.net that yearly, the lack in domestic rice production is 1.5 to 2 million tons. However, in 2021, rice imports were almost 3 million while the domestic harvest was also high.

The FFF said rice imports in 2021 were 2.98 million tons––out of this, 40 percent or 1.2 million tons arrived when the Philippines was having its wet, or main, harvest season in October, November and December.

There was also a record high domestic harvest of 20 million tons of rice in 2021 while last month, despite the immense carryover of stocks from last year, 262,000 tons of imported rice had arrived.

When farmers harvest in March, the FFF said there will be a glut, which will result in low palay prices even as the costs of fertilizer, fuel, and other farm needs remain high. 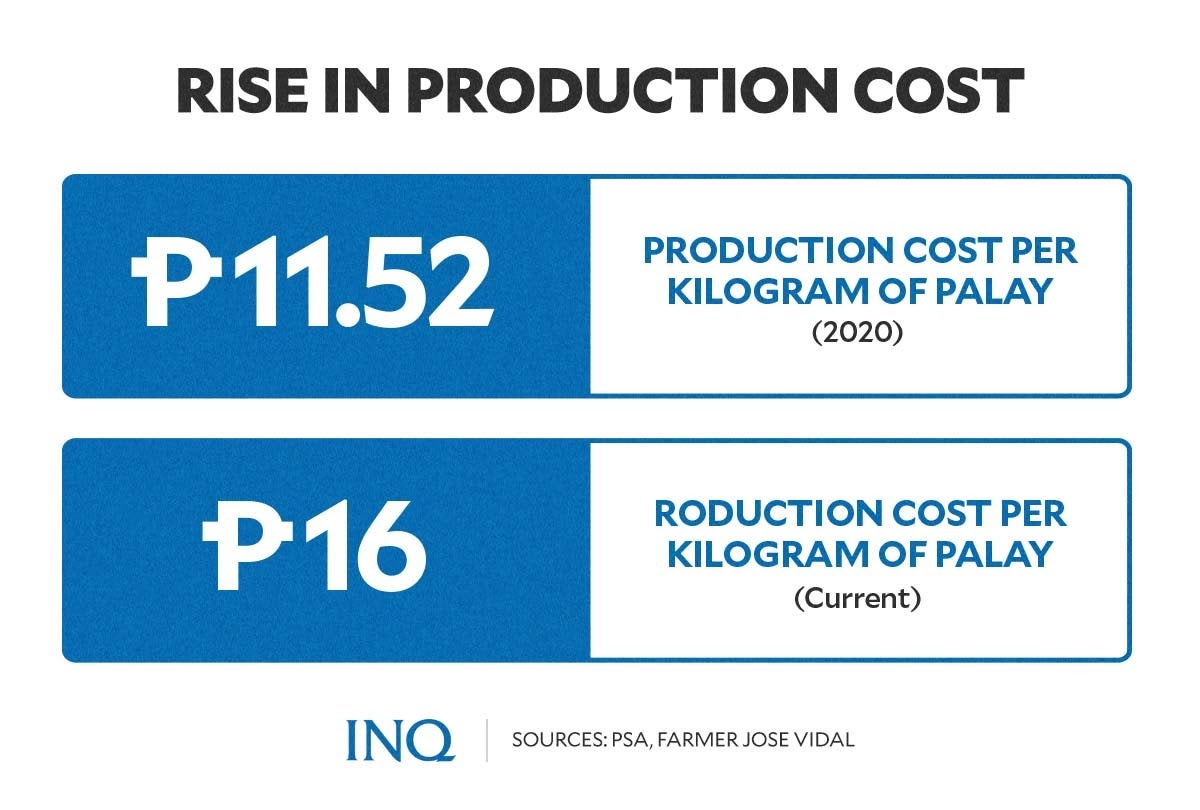 For Montemayor, “having a large harvest is meaningless to farmers if it results in low prices for their harvest”. He said because of the excess, “traders will tend to discount farm gate prices.”

In 2019 limits on rice imports were lifted when President Rodrigo Duterte signed Republic Act No. 11203—or the Rice Tariffication Act—a law which paved the way for more imported rice to reach the Philippines.

The law, which amended Republic Act No. 8178 or the Agricultural Tariffication Act of 1996, said that instead of limiting rice imports, private importers will have to pay a 35 percent tariff.

Republic Act No. 11598, or the Cash Assistance to Filipino Farmers Act, provided that tariffs in excess of P10 billion a year will be for cash transfers to farmers hit by the Rice Tariffication law. 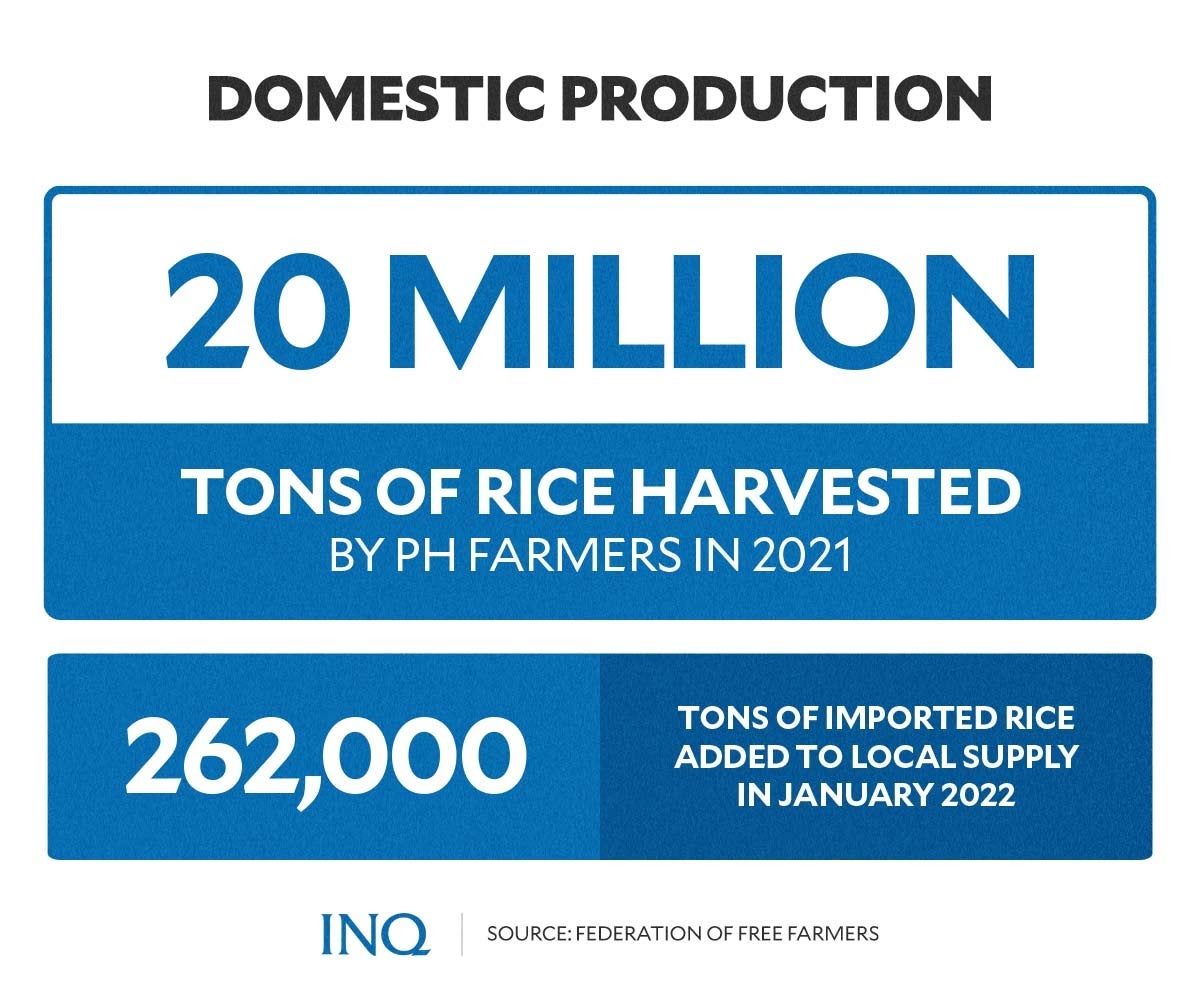 However, the FFF explained that one out of every three palay farmers will not get any cash assistance because Republic Act No. 11598, which was signed last year, “only applies to farmers tilling two hectares or less.”

For Vidal, the Rice Tariffication law should be reviewed again, saying that the excess of P10 billion could be given to the National Food Authority (NFA) for its program to purchase palay from local growers.

This, he said, will help more Filipino farmers, even those who do not till their own lands. 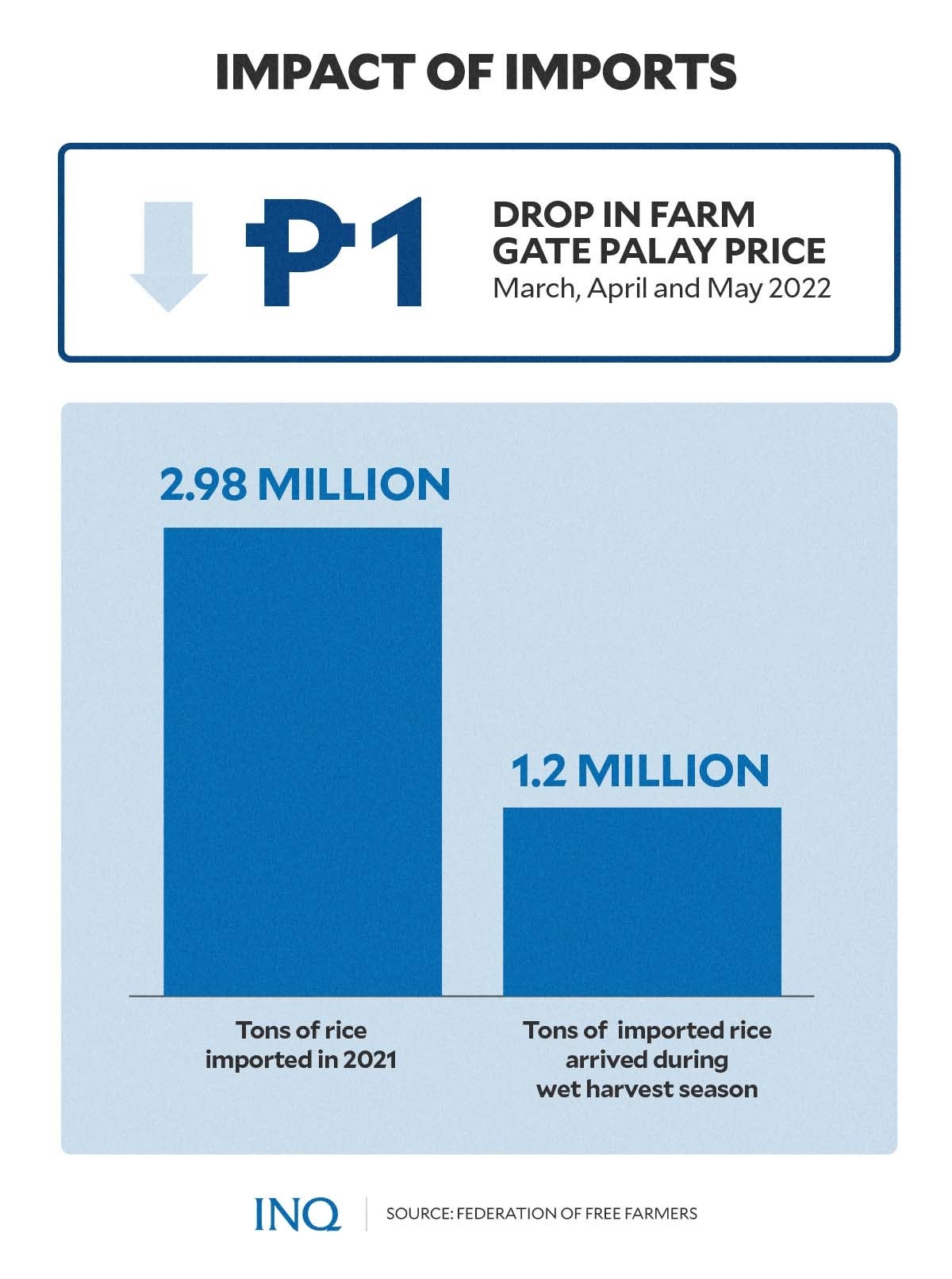 Last year, because of the increase in rice imports, the government collected tariffs worth P19 billion. However, the FFF said it was not significantly felt, especially by farmers.

For Montemayor, palay prices went down because of excessive rice imports: “The P9 billion for farmers is very small compared to the P60 billion that farmers are losing every year.”

Ibon Foundation said that in 2019, the year the law took effect, rice farmers’ net income per hectare dropped by 32 percent in the dry season, 47 percent in the wet season, and 38 percent on the average as compared to 2018. 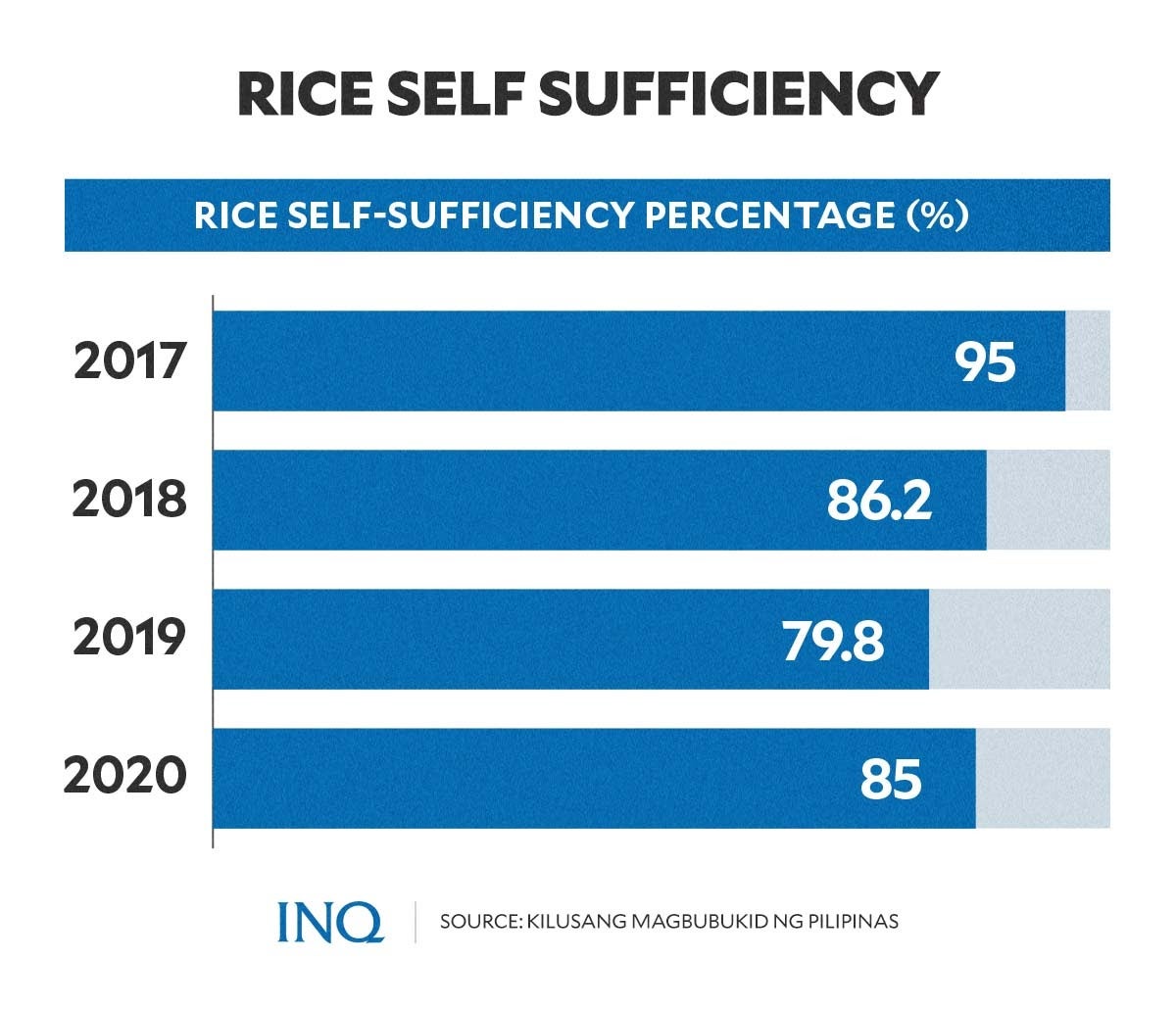 For Rosario Guzman, head of Ibon Foundation’s research department, this translated to a lower profitability ratio for farmers. She said that these were all official data from the PSA.

Montemayor explained that there is likewise no limit regarding whether private importers could bring imported rice before or while Filipino farmers are harvesting.

“So in that sense, the effect is immense because while farmers are harvesting, importation is continuous and the import volume is very big, way more than what is needed,” he said.

He said, “It’s true that when we import a lot, we get a lot of tariff revenues, however, it’s like a double-edged sword against farmers because when rice imports are excessive, palay price would go down.”

Even Sen. Juan Miguel Zubiri, who is seeking a new term as senator, took a firm stand against agricultural importation, saying that the Department of Agriculture (DA) should cease importation during harvest season for local farmers.

The group Bantay Bigas, which fights for enough, safe, and inexpensive rice, said the Rice Tariffication law was the reason there’s even a P10 per kilo farm gate price which is too far from what farmers want: P20 per kilo.

Vidal, who is already 60 years old, is part of the Provincial Farmers Action Council which resolved to ask Duterte to raise palay price from P19 to P22 through the NFA.

For Vidal, who said that farmers have no choice but to sell their harvest even when the price is low, a P3–rise would help a lot, saying that now, their income per hectare for four months is P20,000. 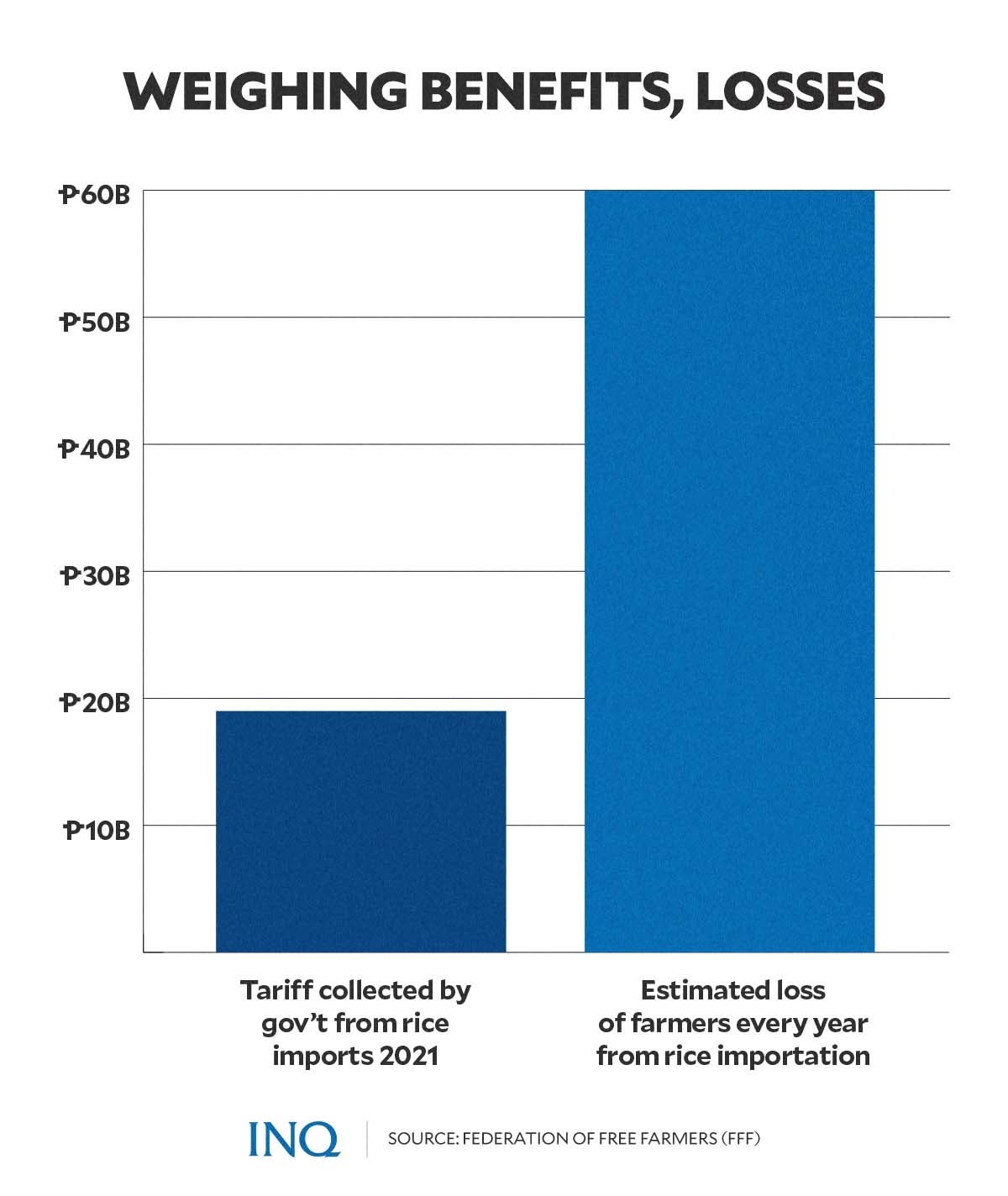 He said if the NFA will get palay for P22 per kilo, farmers will possibly earn 30,000. “That’s already a great help for us, especially now that farming is our only chance to make both ends meet for our families,” he said.

He said they really have no choice, even when the farm gate price is discounted because of rice imports, explaining that “we need to sell our harvest so that we can pay our debts.”

“If we will not be able to pay early, the interest will increase and the worst that could happen is that we’ll have no finances to start again if the one we’re indebted to will no longer lend us some help,” he said.

Last year, the Federation of Central Luzon Farmers Cooperative likewise asked the NFA for the same move, saying that before the law took effect, the price for newly harvested palay was P16 to P20 per kilo and P20 to P24 for clean and dry.

Last Monday (Feb. 14), as the Philippines marked the third year since the law was signed, the Kilusang Magbubukid ng Pilipinas (KMP) said it’s high time for it to be repealed.

Why? KMP said it was because “the law has destroyed the lives of millions of rice farmers,” stressing that since it took effect, the law has wrecked the local rice industry and food-self sufficiency.

Danilo Ramos, chair of the KMP, said the law “endangered the welfare of both producers and consumers and undermined the livelihoods of millions of rice farmers.”

He stressed that the Rice Tariffication law planted the seeds to many problems, like starvation and indebtedness, while retail prices remained elevated for poor consumers. 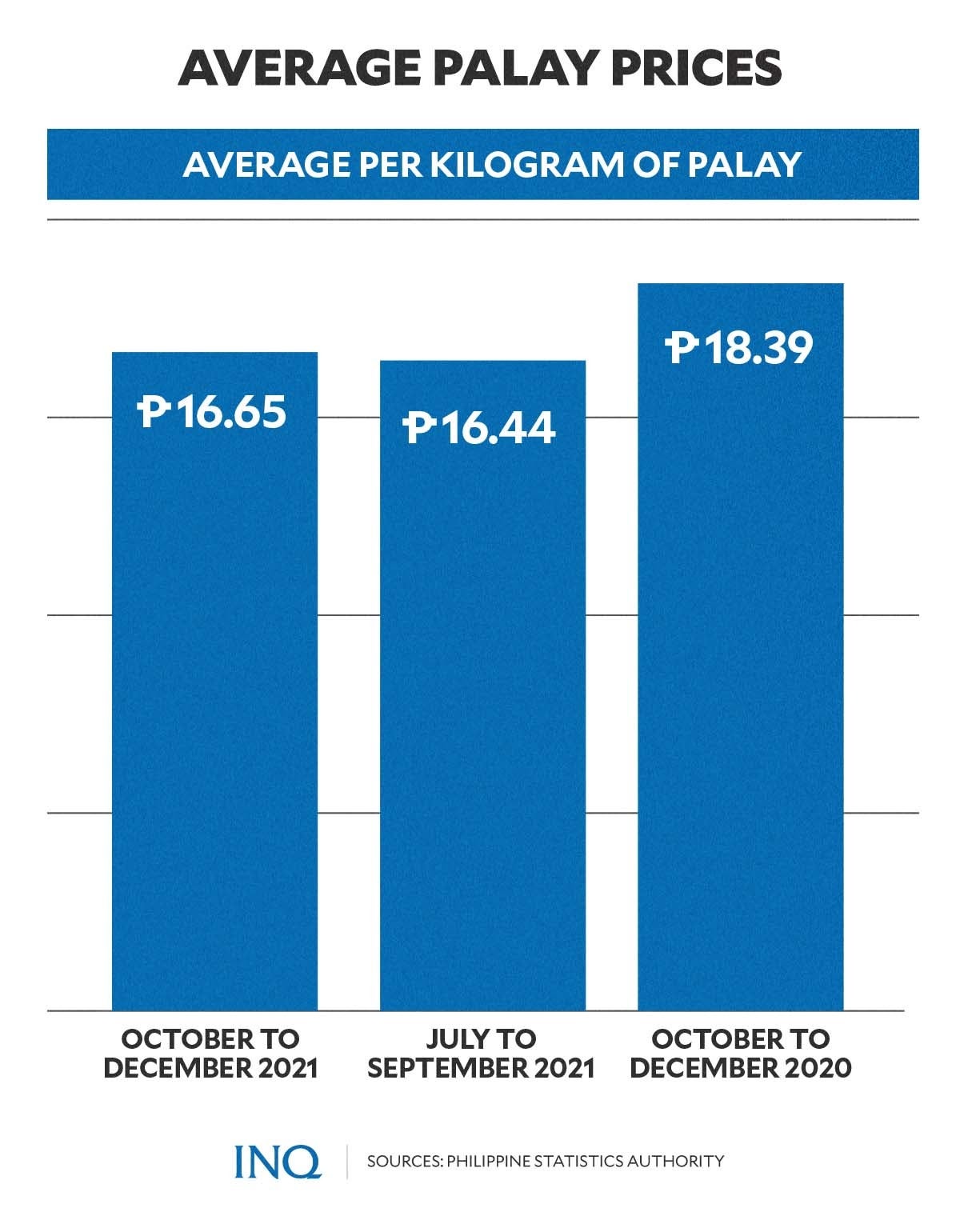 For Herminio Agsaluna, president of the Pambansang Kilusan ng mga Samahang Magsasaka, while the government has interventions to help farmers, “it would mean nothing if it’s detached from reality”.

He told INQUIRER.net that the distribution of farm needs, like seeds and fertilizer, should take place way before the time farmers needed them: “What’s happening is we’re given the needs a few weeks before harvest.”

This, he said, was the reason the DA should be led by a “real farmer” so that the interventions would really help farmers, especially those who need it the most.

Bantay Bigas said it challenges presidential candidates to heed the demands of food producers and consumers to make certain that “food security and rice agenda are part of their programs”.

It said the last three years have only brought distress to farmers: “That’s why they are looking for someone who has a heart and who is ready to promote and fight for their interest.”

Cathy Estavillo, Bantay Bigas spokesperson, said the increase in rice production cost as well as the distribution of seeds, fertilizer and cash assistance will remain insignificant.

Why? She explained it’s insignificant as long as “depressed” palay prices and lack of government support in farm needs and post-harvest facilities persist and when local markets are filled with imported rice.

The FFF stressed that the increase in rice production did not benefit farmers significantly despite the billions spent by the DA on its rice program.

It said overall, harvest per hectare improved by only 1.6 percent in 2021, equivalent to an additional income of only P1,095 per hectare: This is far from DA’s claim that farmers earned P10,000 despite the rise in fertilizer costs.

The FFF then raised concern on the effectiveness of DA’s interventions, saying that the additional palay output of about 665,000 tons recorded in 2021 had a market value of only P11 billion.