CABANATUAN CITY—Left with no choice, Donie Roberto, a farmer in Barangay Bitas here, has to sell his rice harvest at P15.50 a kilogram, just a little above production cost.

“There’s a profit, but it’s not much,” he told the Inquirer.

Roberto said farmers like him would usually need to sell their harvest of palay (unhusked rice) for at least P17 a kilo to recover labor cost.

“What’s worse is that when there’s rain, the price of palay usually drops further because it affects the quality of the grain,” he said.

Senate President Pro Tempore Ralph Recto on Monday called on the Department of Agriculture (DA) to investigate the alarming drop in the buying price of locally grown rice, which has reportedly plummeted to as low as P12 a kilo, making the staple cheaper than a COVID-19 mask.

“I’m urging DA to look into it. [I also] proposed to [provide] financial assistance to rice farmers,” Recto told the Inquirer in a Viber message.

He said the department should check if the plunging farmgate price of palay was really an adverse effect of the rice tariffication law, which opened the country to imported rice from Vietnam and Thailand where rice production is usually cheaper due to government subsidies and mechanization.

It should also consider postponing the implementation of rice tariffication if it was really causing the dip in the buying price of rice, he said.

The DA said it was open to investigating reports of low palay prices in the market. “We are ready to explain at the proper forum,” said its spokesperson, Noel Reyes.

Data from the Philippine Statistics Authority (PSA) showed the average farmgate price of palay continued its downtrend. During the first week of September, the price fell further to P17.64 a kilo from P18.04 the previous week. 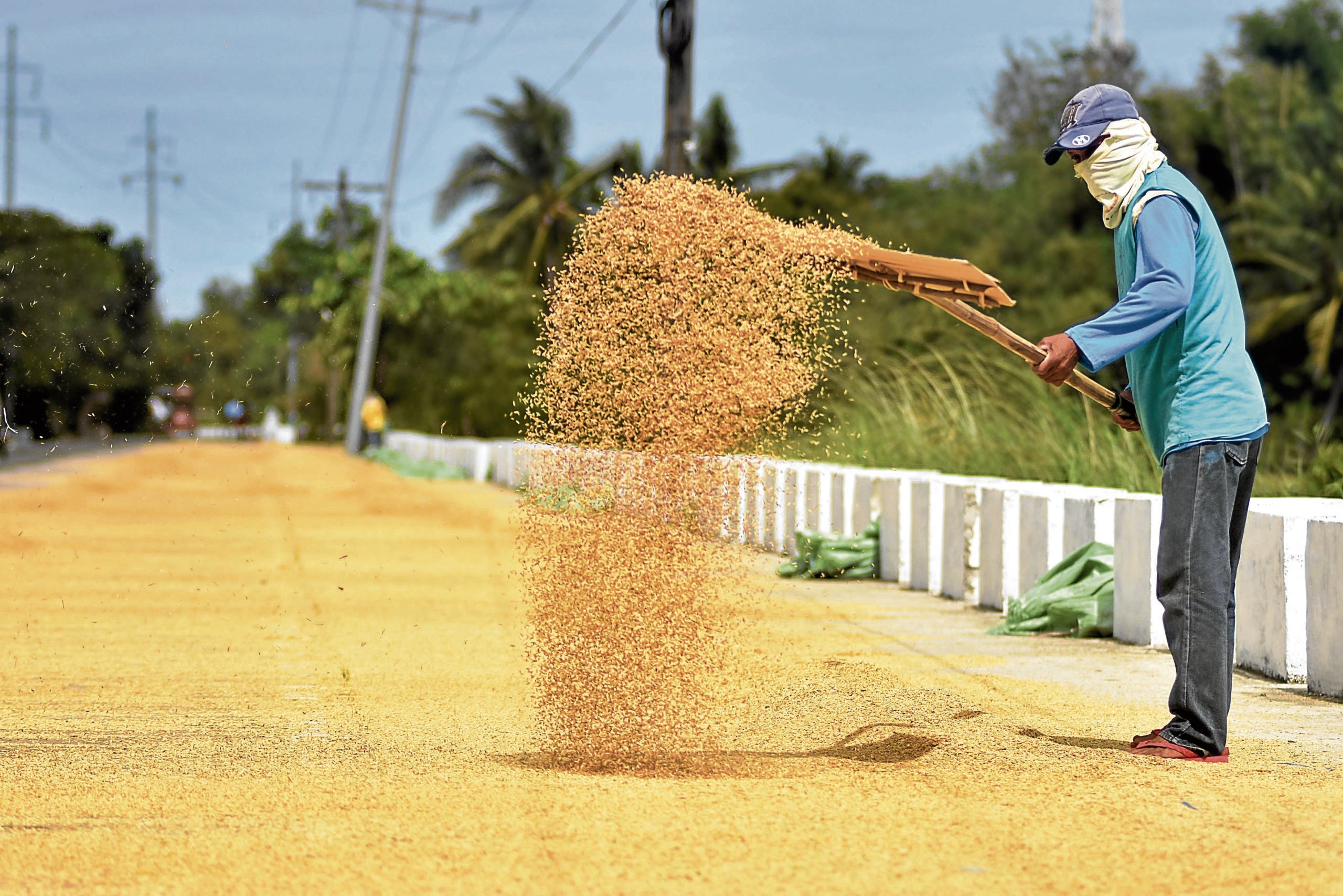 FREE FALL Barely making ends meet amid the pandemic, rice farmers, such as this one in Aguilar, Pangasinan, now have to deal with the alarmingly low price of palay—as cheap as P12 a kilo, prompting calls for an investigation by the agriculture department. —WILLIE LOMIBAO

Recto said the DA should review if this was accurate “because this may not be what is happening.”

“If this remains unchecked, the rice farmers may just become ‘plantito’ and ‘plantita’ if they see that selling [ornamental plants] is more profitable,” the senator said, referring to people who have turned to growing and selling herbs, succulents and other house plants during the pandemic.

“I thought rice exporting countries have adopted a policy of ‘rice nationalism’ where they are limiting, if not banning, the export of rice as a buffer during the pandemic?” he noted.

Citing the government’s study of rice production in 2018, Recto said a farmer would earn an average of P33,355 per hectare if rice was sold at P20.40 a kilo. “But at P12 a kilo the farmer will not earn anything, as in zero,” he said.

He surmised that some farm inputs may have been more expensive due to the coronavirus lockdowns.

“Income [from rice production] is an economic driver in many rural economies, which have been absorbing the recent unemployed [from urban areas],” Recto said.

Roberto said he was luckier than other farmers who were selling their harvests to a private trader at a farmgate price of P12 to P13 a kilo.

Recto said “the least that the DA can do is to spot areas where palay is being bought at bargain prices and recommend measures on how to shore it up so that farmers will not be at the losing end.”

“They should tell us where these municipalities with low palay quotations are and we will help them,” Reyes said. “We’ve been going around several provinces, and we have not seen any low palay rates.”

Earlier, Agriculture Secretary William Dar assured farmers that the government would intensify its palay procurement. In his visit to Lupao town in Nueva Ecija last week, he said the National Food Authority (NFA) would help farmers by buying palay directly from the villages.

“The NFA will continue buying palay at P19 a kilo with 14 percent moisture,” he said.

The DA has called on provincial governments to join the palay buying spree, noting that the NFA cannot accommodate the bulk of the country’s palay output as it was only given P10 billion for its palay procurement program this year.

With that funding, the NFA could only buy over 500,000 metric tons (MT) of palay or about 2 percent of the country’s palay production at P19 a kilo.

Reyes said the agency was already instructed to “roll over” its funds by using its initial profit to buy more. But that would only allow it to accommodate 4 percent of the farmers’ output for this year, at most.

The commitment of local governments to buy their constituents’ palay would be crucial in elevating palay prices. But of the country’s top 12 palay-producing provinces, only Governors Rodolfo Albano III of Isabela, Aurelio Umali of Nueva Ecija and Matthew Manotoc of Ilocos Norte have heeded the DA’s call.

The NFA in the province will buy 485,000 bags of palay until the last quarter of the year, using its P461-million budget allotted for the project.

“This is to command the price increase. The program should have started during the last dry crop season,” Vergara said, adding that it was temporarily stopped as palay prices were still high at that time.

Prices have since skyrocketed to P19 to P20 a kg. Roberto and other farmers in Nueva Ecija have joined an online campaign for an increase in palay prices. As of Sunday, the drive had gained 67,000 supporters.

The Federation of Free Farmers and the Samahang Industriya ng Agrikultura have been banging the government’s doors for allegedly favoring rice imports more than local supply, which is causing the price landslide.

Between January and September this year, the Bureau of Plant Industry issued import certificates for 3.75 million MT of rice, although often, not all these would be used by traders and importers.

Nonetheless, the US Department of Agriculture projected that the Philippines would remain as the world’s biggest rice importer this year with 2.6 million MT.

Ultimately, Reyes said the DA could not stop rice importation as provided under the rice tariffication law. What the government can do is to manage the release of sanitary and phytosanitary permits to traders and importers—a requirement before the latter could outsource the staple.

With rice already deregulated, Reyes said the DA could also not force traders to stop importing or dictate when imports must be released to the market.

“We can only appeal to them (traders), and the secretary has been calling on importers to help our local farmers,” he said.