MANILA, Philippines—The government was clear—the rice liberalization law (RTL), which took effect in 2019, is the “best model that we have to help both farmers and consumers,” but the group Federation of Free Farmers (FFF) took a close look and it was not so.

Republic Act No. 11203, which was signed by President Rodrigo Duterte on Feb. 14, 2019, replaced quantitative restrictions—a ceiling on volume—on imported rice with tariffs of 35 to 40 percent. As a result, commercial traders could now bring in unlimited volumes of rice at any time.

Last May 12, Socioeconomic Planning Secretary Karl Chua said that because of the RTL, “we are able to address both the needs of consumers for a lower retail price of rice and use the tariff revenues to fund the Rice Competitiveness Enhancement Fund (RCEF) and provide even more assistance to farmers with excess tariff revenues”. 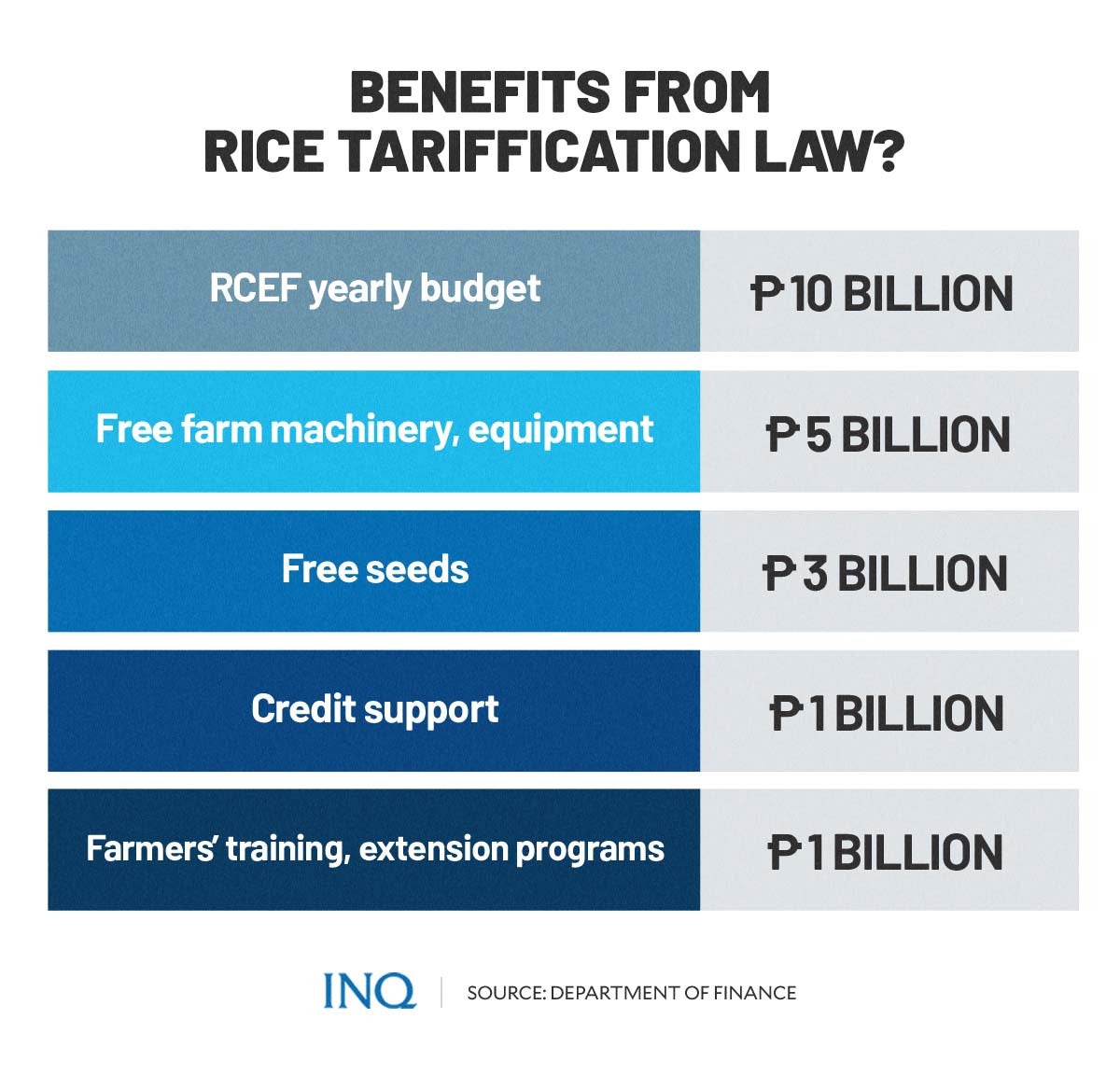 Finance Secretary Carlos Dominguez III likewise said last May 20 that the law earned P46.6 billion in the first three years of its implementation, saying that it benefited palay farmers through the RCEF, which has P10 billion yearly for these programs:

The law, Dominguez said, makes certain that farmers directly benefit from the liberalization of rice trading, stressing that “it is an opportunity to revolutionize the agriculture sector and help our farmers become more competitive in the global economy”.

However, FFF national manager Raul Montemayor was not convinced: “Are these officials giving us the real and complete picture about RTL? Or, are they cherry picking—citing only data that support their position—while concealing crucial information that indicates serious defects in the law?”

This, as Ferdinand Marcos Jr., the presumptive president, likewise said that the law is disadvantageous to farmers, saying that the continuous and massive importation of rice is no longer sustainable. “I wouldn’t mind if we suspend the RTL first,” he said late last year.

Montemayor said “some of our top government officials have gone to the extent of spreading half-truths to defend RTL”. He stressed that while they may have the best of intentions, they are doing a great disservice to the Filipino people by hiding the truth.

First, Montemayor said that while rice prices really dropped by as much as P7 a kilo from the 2018 peak of P42.80 a kilo, this was not solely because of the RTL, saying that even before the law took effect in March 2019, prices had already gone down with the arrival of emergency imports. 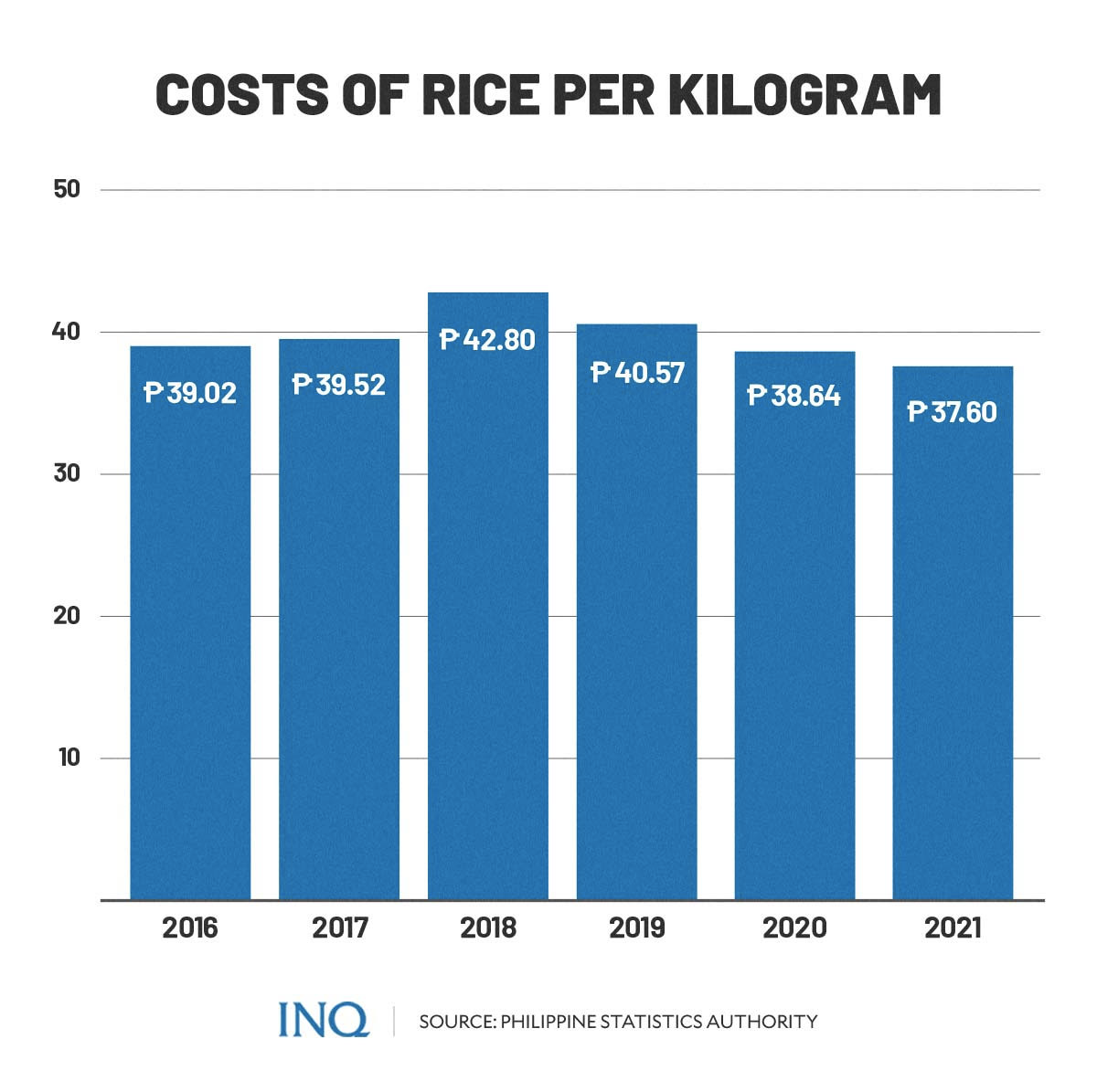 “Our economic managers are being intellectually dishonest by limiting their comparison to prices in 2018, knowing that prices then were abnormally high due to the rice crisis,” he said.

He stressed that government officials should be aware that prices in the first three years of the RTL “practically matched, on the average,” 2016 and 2017 prices.

“But they do not divulge this fact, because it will mean that consumers did not fare better under RTL and that the promised cheaper rice—resulting from unbridled imports—did not truly materialize,” he said.

For Montemayor, economic managers cannot escape culpability for the rice crisis in 2018 either, saying that “it was their cabal within the National Food Authority (NFA) Council that repeatedly rejected requests from NFA management to replenish agency stocks with imports, until the agency ran out of rice and prices got out of hand.

“And when rice prices went down, they heralded the success of the law in solving a problem that they themselves actually created,” he said.

Chua said the RTL has been key in managing inflation, stressing that before 2019, rice was the single biggest contributor to inflation.

“Today, and since the passage of RTL three years ago, it has had a negative to minimal contribution to inflation,” he said.

He explained that stable supply from higher production and more imports led to low and stable prices for rice. The latest inflation figures revealed that rice inflation averaged 1.4 percent in the first quarter of 2022.

When the rice crisis hit in 2018, the PSA said rice was the highest contributor to the inflation in September that year while food items in the consumption basket accounted for more than half of the said rate.

For Montermayor, the assertion that RTL reduced rice-based inflation is “highly misleading,” saying that zero inflation in rice merely means that prices have not changed relative to a previous period. 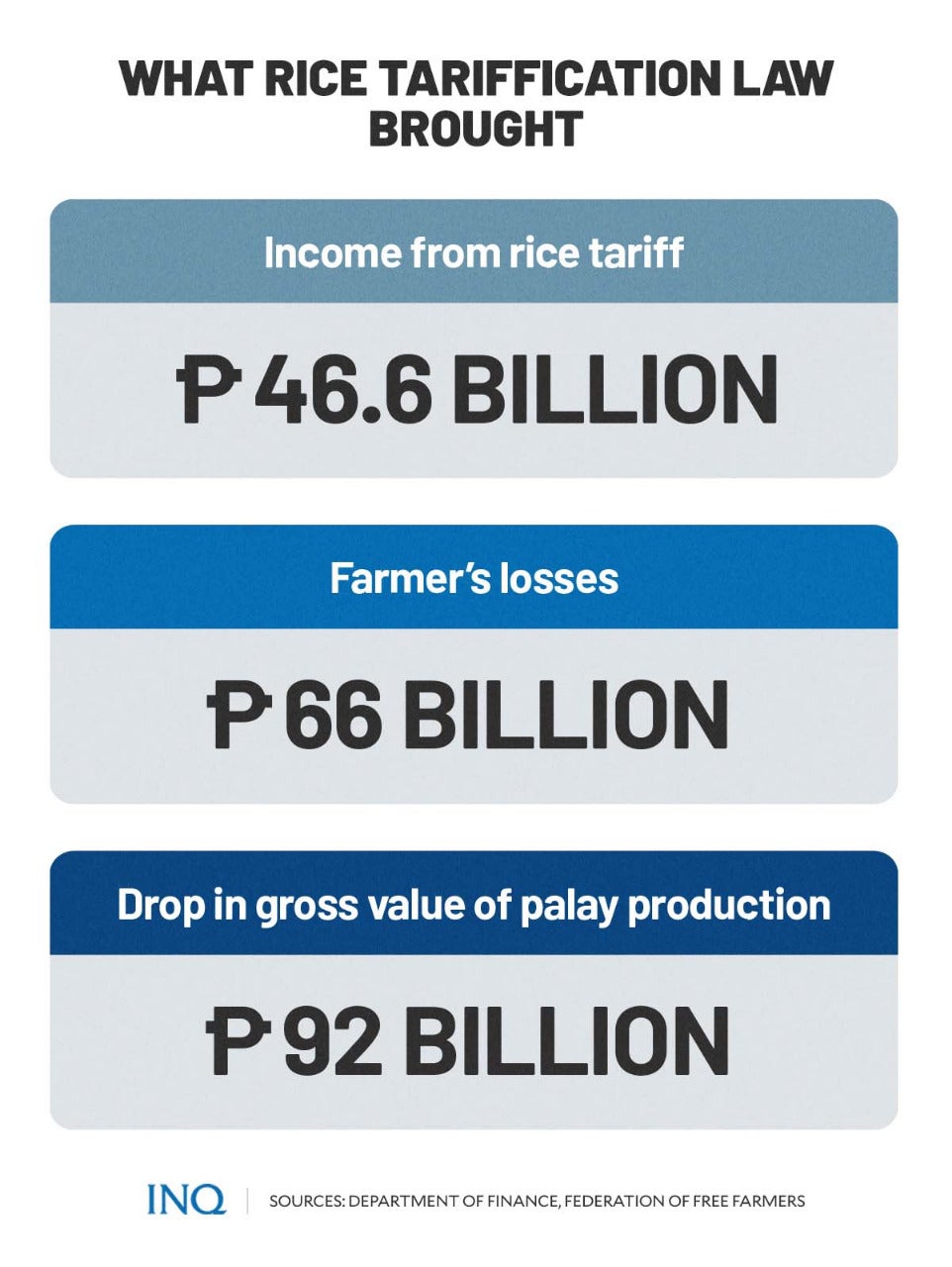 “Even with zero inflation, consumers are not better off, because they are still paying the same high prices for rice as in 2016 and 2017,” he said.

When NFA rice was still available in the market, a kilo was worth P27, however, the supply of “cheap rice” came to a standstill when the RTL stripped NFA of its price stabilization functions and relegated the office to the maintenance of stocks for distribution when there are disasters and emergencies.

“In fact, the poor are worse off under RTL […] Importers in turn elected to bring in the more expensive premium grades of rice, which gave them a higher profit margin. Poor consumers now have no choice but to pay Php 10 more per kilo to get regular rice from commercial traders,” Montemayor said.

Like what Dominguez said, in the first three years of the implementation of RTL, the law earned P46.6 billion.

Based on data from the Department of Agriculture (DA), since the implementation of RCEF, more than one million rice farmers have received over 8.6 million bags of certified inbred rice seeds, which resulted in over 830,000 hectares of palay farms now yielding more rice than before. 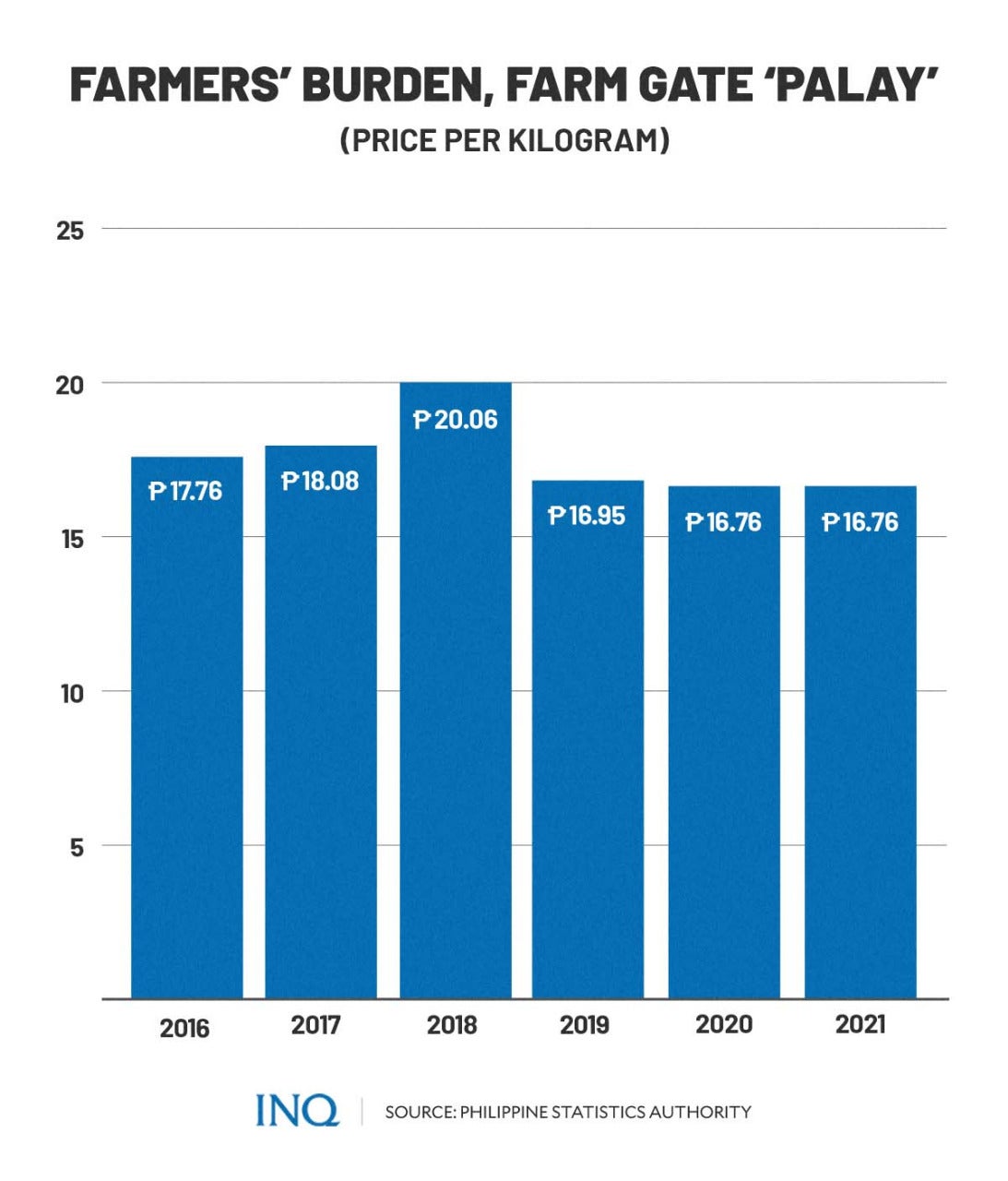 “With RCEF, 950,000 farmers now enjoy access to 19,542 units of farm machinery equipment. Over 90,000 rice farmers have benefited from 4,978 batches of training sessions and 14,459 specialists, trainers, and extension intermediaries have received training on modern rice farming techniques,” the Department of Finance (DOF) said.

However, Montemayor said “this is just one side of the picture,” stressing that the RTL opened up the domestic market to excessive imports and precipitated a severe fall in palay prices, causing P66 billion in losses to farmers.

Based on data from the PSA, between 2019 and 2021, the gross value of palay production (including harvests kept by farmers for family consumption) decreased by P92 billion.

“Moreover, only about half of all rice farmers qualified for, and benefitted from, RCEF and related support programs. On the other hand, the drop in palay prices hurt all farmers, irrespective of their farm sizes and location,” he said.

Montemayor stressed that farmers were therefore net losers from RTL, while consumers gained almost nothing.

RELATED STORY: Winners and losers from the rice tariffication law

“How could this happen when, as monitored by PSA, wholesale prices declined, presumably because of the influx of cheap imports?” he said.

“The answer is simple—importers and middlemen did not pass on the savings to consumers and instead pocketed the gains for themselves. In the National Capital Region alone, the average margin between wholesale and retail prices increased by over P2 a kilo during the RTL period,” Montemayor said.

Chua stressed that the increase in importation did not hurt local rice production, saying that in 2021, palay production increased to 20.0 million metric tons, 3.5 percent higher compared to 2020.

While Montemayor said that it is true, “this is merely 3.5 percent better than the erstwhile record of 19.3 million tons achieved in 2017”.

“Between 2017 and 2021, our population—and correspondingly our rice requirement—grew by some 7 percent. Today, we are actually less food secure and even more reliant on imports,” he said.

Based on data from the World Bank and the Commission on Population and Development (Popcom), the population in 2017 was 105.2 million then it rose to 110.8 million in 2021.

Montemayor said rice productivity did improve to an average of 4.1 tons per hectare during the first three years of RTL. However, this is only 3.7 percent better than in 2016 to 2018. 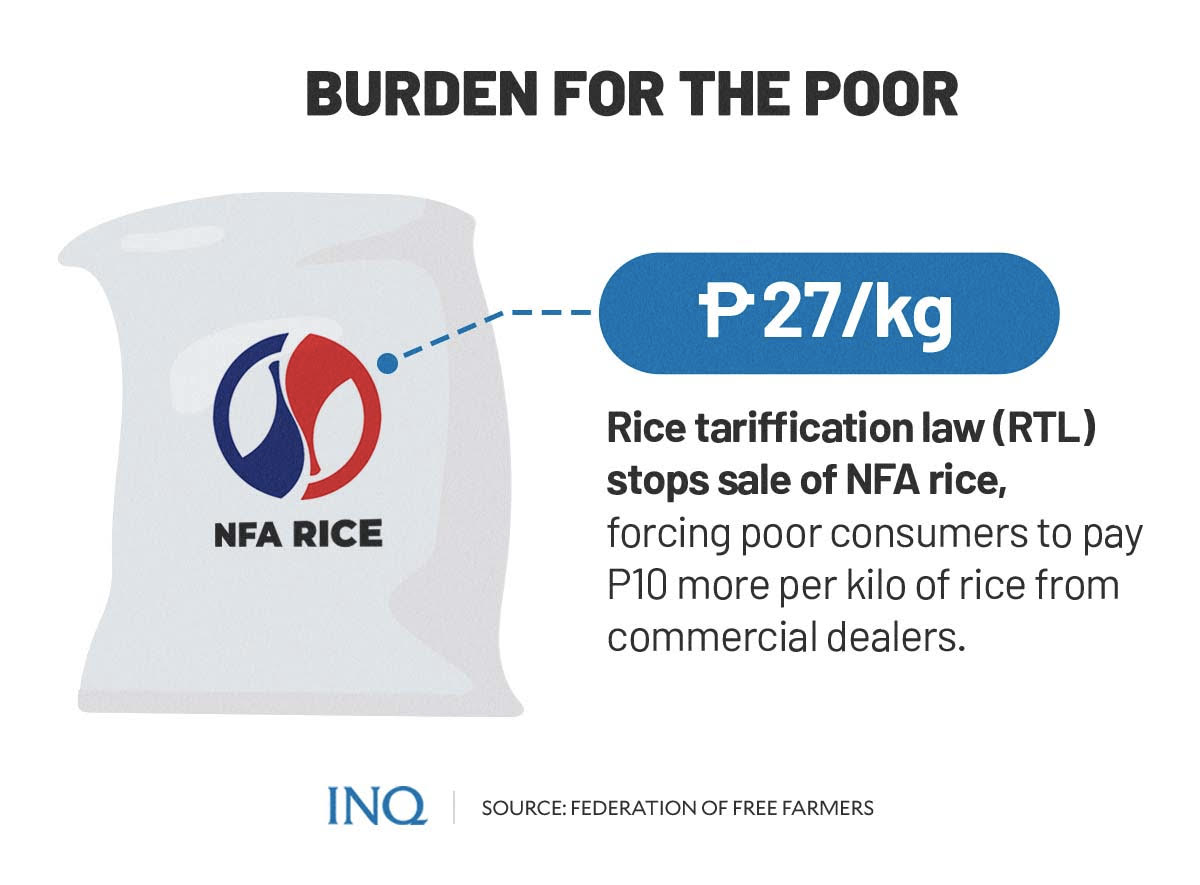 “We are still a long way off from the 5-ton per hectare target, which is deemed necessary for our farmers to compete against imports,” he said.

“The value of these alleged advances in output and productivity during the first three years of RTL just about equals the billions poured into the rice sector from RCEF and other support programs. Meaning, we went through a lot of trouble just to get our money back,” Montemayor said.

He explained that even the government did not significantly curtail NFA’s losses despite limiting the agency to buffer stocking. The agency incurred only P9.6 billion in losses in 2021, or 38% lower than in 2020.

RELATED STORY: Return of NFA rice for the poor eyed, but seen as tariffication failure 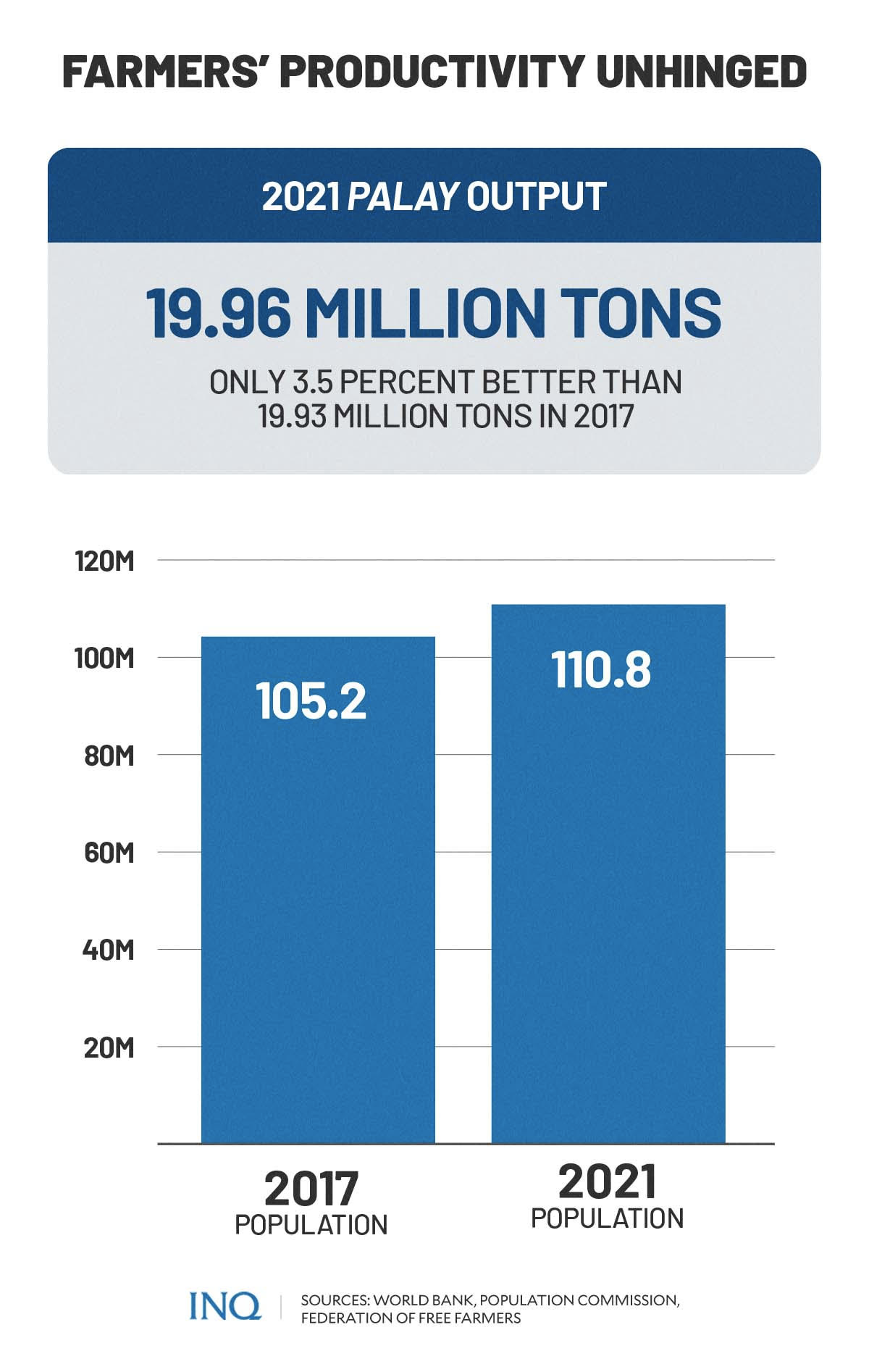 But there is no mention of the years when losses were higher. Overall, in the first three years of RTL, NFA lost a total of P41.87 billion—bigger than its cumulative losses of P36.8 billion from 2016 to 2018, he said.

This, as government subsidies to the NFA between 2019 and 2021 also doubled to almost P64 billion, from only P28.5 billion in the three years before the enactment of the law.

“While RTL may have ended the alleged rigging of import contracts by some past NFA officials, corruption has simply moved elsewhere. Unscrupulous private importers have been misdeclaring and undervaluing their shipments with impunity, possibly in connivance with some Bureau of Customs personnel,” he said.

Montemayor said that in the process, the government has lost an estimated P10 billion in foregone tariffs.

“RTL has unnecessarily tied the hands of government and compromised its ability to address market disruptions,” he said.

For Montemayor, “we can fault those who mislead us repeatedly. But if we continue to give credence to their half-truths and deceptive claims, we should blame only ourselves if the wrong remedies are applied”.