Putin lashes out at US over Ukraine, Taiwan | Inquirer News

Putin lashes out at US over Ukraine, Taiwan 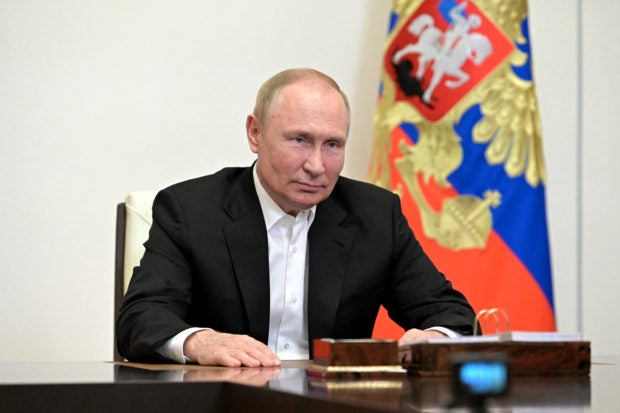 In this photograph taken on August 15, 2022 Russia’s President Vladimir Putin addresses attendees of the Tavrida.ART festival via a video link at the Novo-Ogaryovo state residence, outside Moscow. (Photo by Pavel Byrkin / Sputnik / AFP)

MOSCOW — Russian President Vladimir Putin on Tuesday accused Washington of seeking to prolong the conflict in Ukraine and of fuelling conflicts elsewhere in the world, including with the visit of US House Speaker Nancy Pelosi to Taiwan.

“The situation in Ukraine shows that the US is trying to prolong this conflict. And they act in exactly the same way, fuelling the potential for conflict in Asia, Africa and Latin America,” Putin said in televised remarks, addressing the opening ceremony of a security conference in Moscow via videolink.

“The American adventure in relation to Taiwan is not just a trip of an individual irresponsible politician, but part of a purposeful, conscious US strategy to destabilize and make chaotic the situation in the region and the world,” he added.

He said the visit was a “brazen demonstration of disrespect for the sovereignty of other countries and for its (Washington’s) international obligations”.

“We see this as a carefully planned provocation,” Putin said.

Relations between Moscow and Washington have been in tatters since Russia in late February launched a military intervention in pro-Western Ukraine.

Pummelled by a barrage of unprecedented Western sanctions, Putin has sought to bolster ties with countries in Africa and Asia, especially with China.

Moscow was in full solidarity with key ally Beijing during Pelosi’s August visit to self-ruled, democratic Taiwan, which China considers its territory.