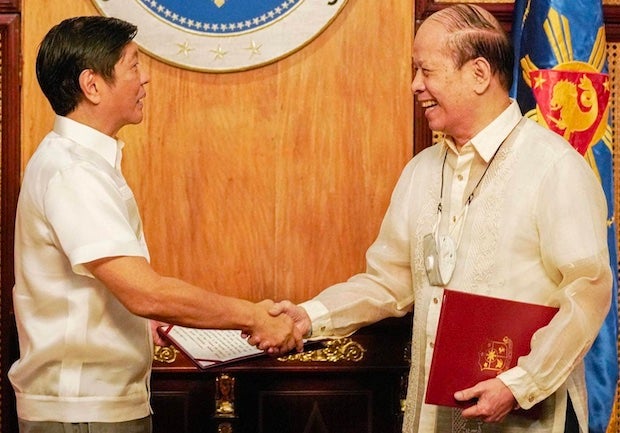 MANILA, Philippines — Former Agriculture Secretary Domingo Panganiban is returning to the Department of Agriculture as an undersecretary under the administration of President Ferdinand “Bongbong” Marcos Jr.

Panganiban took his oath before Marcos, who is also the agriculture secretary, in Malacañang on Aug. 12.

“It’s an honor to work with our experts in responding to the needs of our country, particularly in the agriculture sector,” Marcos said in a Facebook post in Filpino on Monday.

Panganiban served as agriculture secretary during the administration of Presidents Joseph Estrada and Gloria Macapagal-Arroyo.

According to the DA website, Panganiban, in his first term as agriculture secretary, continued the implementation of the Agriculture and Fisheries Modernization Act, the government’s comprehensive framework and platform for rural development.

Panganiban earned his Bachelor of Science in Agriculture degree from the University of the Philippines in Los Baños, Laguna.

Read Next
Agri group wants culpability of officials involved in sugar import fiasco
EDITORS' PICK
Percy Lapid’s kin: ‘We demand that his cowardly assassins be brought to justice’
Nothing’s certain so here’s how everyday Filipinos can make the most out of their Plan B
Do all the things you do, faster
PNP vows to bring justice for slain Percy Lapid; says probe underway
House energy committee chair Arroyo bats for cheap electricity
‘Seniority’ requirement despite vacant posts in DOH bothers senators
MOST READ
Student stabs teacher dead in Samar town
Not rehired?: Trixie Cruz-Angeles not on list of reappointed Cabinet execs
Final net satisfaction rating slightly decreases for Robredo, Sotto — SWS
Heart Evangelista to stay abroad ‘indefinitely’: ‘Hindi muna ako babalik’
Don't miss out on the latest news and information.