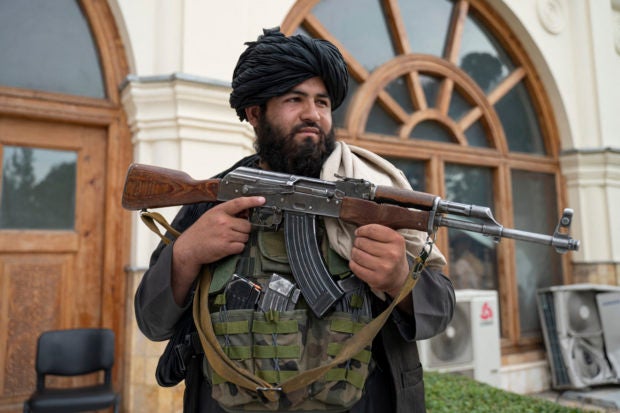 A Taliban fighter stands guard after a gathering attended by Afghanistan’s Prime Minister Mohammad Hassan Akhund and Minister for Promotion of Virtue and Prevention of Vice Sheikh Mohammad Khalid at the former presidential palace in Kabul on August 13, 2022. AFP

KABUL — The Taliban marked the first anniversary of their return to power in Afghanistan with a national holiday Monday, following a turbulent year that saw women’s rights crushed and a humanitarian crisis worsen.

Exactly a year ago, the hardline Islamists captured Kabul after their nationwide lightning offensive against government forces ended 20 years of US-led military intervention.

“We fulfilled the obligation of jihad and liberated our country,” said Niamatullah Hekmat, a fighter who entered Kabul on August 15 last year just hours after then-president Ashraf Ghani fled the country.

A chaotic withdrawal of foreign forces continued until August 31, with tens of thousands of people rushing to Kabul’s airport hoping to be evacuated on any flight out of Afghanistan.

Images of crowds storming the airport, climbing atop aircraft — and some clinging to a departing US military cargo plane as it rolled down the runway — aired on news bulletins around the world.

Authorities have so far not announced any official celebrations to mark the anniversary, but state television said it would air special programmes.

Taliban fighters, however, expressed happiness that their movement was now in power — even as aid agencies say that half the country’s 38 million people face extreme poverty.

“The time when we entered Kabul, and when the Americans left, those were moments of joy,” said Hekmat, now a member of the special forces guarding the presidential palace.

‘Life has lost its meaning’ 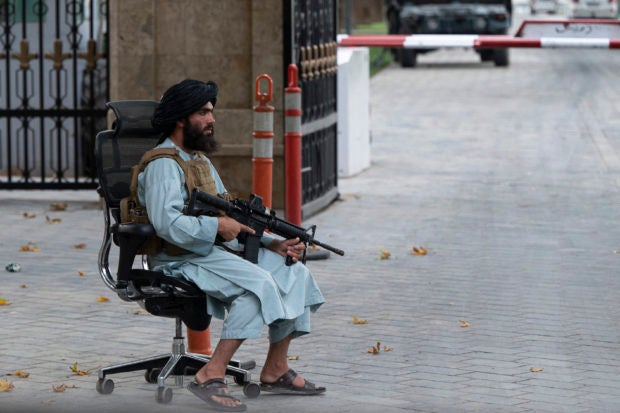 A Taliban fighter guards a gate after a gathering attended by Afghanistan’s Prime Minister Mohammad Hassan Akhund and Minister for Promotion of Virtue and Prevention of Vice Sheikh Mohammad Khalid at the former presidential palace in Kabul on August 13, 2022. AFP

But for ordinary Afghans — especially women — the return of the Taliban has only increased hardships.

Initially, the Taliban promised a softer version of the harsh Islamist rule that characterised their first stint in power from 1996 to 2001.

But many restrictions have been imposed on women to comply with the movement’s austere vision of Islam.

Tens of thousands of girls have been shut out of secondary schools, while women have been barred from returning to many government jobs.

And in May, they were ordered to fully cover up in public, ideally with an all-encompassing burqa.

“From the day they have come, life has lost its meaning,” said Ogai Amail, a resident of Kabul.

“Everything has been snatched from us, they have entered even our personal space,” she said.

On Saturday, the Taliban fighters beat women protesters and fired guns into the air to disperse their rally in Kabul.

While Afghans acknowledge a decline in violence since the Taliban seized power, the humanitarian crisis has left many helpless.

“People coming to our shops are complaining so much of high prices that we shopkeepers have started hating ourselves,” said Noor Mohammad, a shopkeeper from Kandahar, the de facto power center of the Taliban.

For Taliban fighters, however, the joy of victory overshadows the current economic crisis.

“We might be poor, we might be facing hardships, but the white flag of Islam will now fly high forever in Afghanistan”, said a fighter guarding a public park in Kabul.

Dead or alive? On the trail of the Taliban’s supreme leader