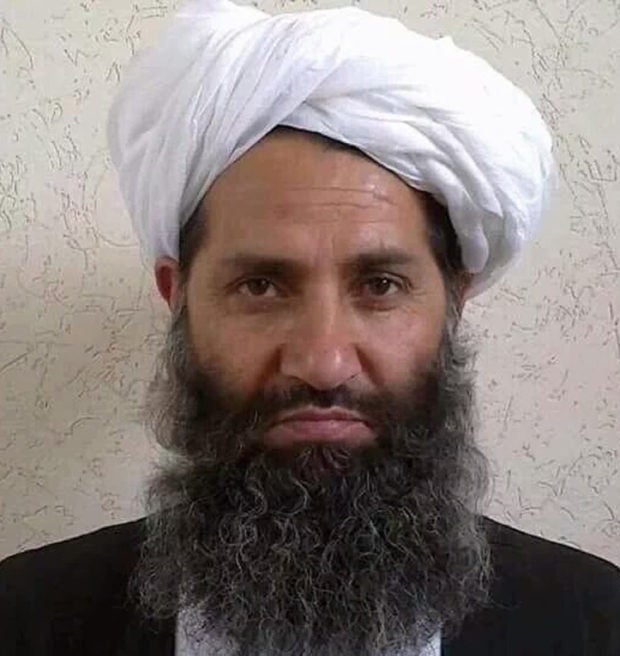 In this undated file handout photograph released by the Afghan Taliban on May 25, 2016, shows the Taliban supreme leader Hibatullah Akhundzada posing for a photograph at an undisclosed location. AFP

KABUL—Afghanistan’s supreme leader called again Friday for the international community to recognize the Taliban government, saying the world had become a “small village” and proper diplomatic relations would help solve the country’s problems.

No nation has formally recognised the regime installed by the Taliban after they seized power in August and reintroduced the hardline Islamist rule that is increasingly excluding women from public life.

In a written message ahead of the Eid al-Fitr holiday that marks the end of Ramadan, supreme leader Hibatullah Akhundzada did not mention international sticking points — including reopening secondary schools for girls.

Instead, he said recognition should come first “so that we may address our problems formally and within diplomatic norms and principles”.

“Undoubtedly, the world has transformed into a small village,” said Akhundzada, who has not been seen in public for years and lives reclusively in Kandahar, the Taliban’s spiritual heartland.

“Afghanistan has its role in world peace and stability. According to this need, the world should recognise the Islamic Emirate of Afghanistan.”

His Eid message comes as the country has been rocked by a series of bomb blasts — some claimed by the jihadist Islamic State group and targeting the minority Shiite Hazara community.

Akhundzada made no mention of insecurity, but said the country had been able to build “a strong Islamic and national army”, as well as “a strong intelligence organization”.

Many in the international community want humanitarian aid and recognition to be linked to the restoration of women’s rights.

Tens of thousands of women lost their government jobs after the Taliban takeover, and they have also been barred from leaving the country — or even traveling between cities — unless accompanied by a male relative.

In March, the Taliban prompted global outrage by shutting all secondary schools for girls just hours after allowing them to reopen for the first time since they seized power.

Akhundzada’s Eid message didn’t touch on girls’ schools, but he did say authorities were opening new centres and madrassas for both “religious and modern education”.

“We respect and are committed to all the sharia rights of men and women in Afghanistan… do not use this humanitarian and emotional issue as a tool for political ends,” he said.

But he said people should willingly embrace the Taliban ideals, and not be forced.

“The relevant authorities should invite people towards sharia with wisdom and avoid extremism in this regard,” he added.

He said also the government was committed to freedom of speech according to “Islamic values”, although hundreds of news outlets have closed, public broadcasts of music banned, and movies and TV dramas featuring women taken off air.

Akhundzada, believed to be in his 70s, has been the spiritual leader of the hardline Islamist movement since 2016, but has remained in the shadows despite the Taliban enjoying largely uncontested power.

His absence from public life has fed speculation he may be dead and his edicts the product of a committee.

Still, in October the Taliban released an audio recording they said was him addressing a madrassa in Kandahar.

Dead or alive? On the trail of the Taliban’s supreme leader