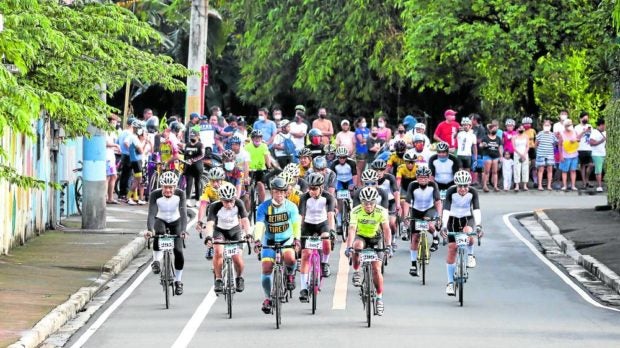 AGING PHENOMENON | Around 20 senior citizens participate in the 15-lap San Roque Bike Fest 2022 on Sunday, Aug. 14, 2022, covering a 700-meter stretch of inner roads in Marikina City. The Commission on Population and Development also on Sunday noted a rise in the number of the elderly to twice their population just two decades ago, while the “number of young Filipinos appears to be trending significantly lower in recent years.” (Photo by LYN RILLON / Philippine Daily Inquirer)

MANILA, Philippines — The global phenomenon of an aging population is creeping into the Philippines.

The Commission on Population and Development (Popcom), citing recent data from the Philippine Statistics Authority (PSA), said the percentage of Filipino elderly in the population has expanded in the last two decades, rising to 8.5 percent in 2020 from 5.9 percent in 2000.

It said the number of so-called senior citizens, or Filipinos age 60 years and above, doubled to 9.2 million in 2020 from 4.5 million 20 years ago.

“The number of seniors is on the rise due to better health and socioeconomic conditions. Seniors are better educated and have healthier lifestyles,” Popcom said in a statement on Sunday.

On the other hand, the percentage of Filipino children in the population has declined “significantly,” according to the government body handling population-related programs.

“The number of young Filipinos appears to be trending significantly lower in recent years, while that of the elderly has been expanding,” according to Popcom.

Executive Director Juan Antonio Perez III saw the trend in a positive light, saying the country could benefit from the current “relatively large numbers” of children between 5 and 14 years old.

“The situation we are seeing now has evolved in other countries in Europe, the Americas and lately in most of the West and Southeast Asian countries, a demographic transition which countries need to tackle with the correct population and development policies affecting the poor, young people and women,” Perez said.

“The boon is possible in the relatively large numbers in the age group 5 to 14 who will gradually join the workforce up to 2035, ensuring a robust and potentially effective workforce,” he continued.

“Policies which can take advantage of this potential can reap a demographic dividend during this period, [such as] policies to increase employability of the young and women, greater entrepreneurship, incentives for local micro, small and medium enterprises (MSMEs) and increasing financial literacy,” Perez added.

However, the Popcom official warned the next generation of the country’s workforce could become “a lost generation if they are not employed or are underemployed, which will create a socioeconomic burden for a smaller, employed population.”

“Some countries like in Eastern Europe, some Latin American countries have failed while many have benefited from a demographic dividend like in Western Europe, North America, Russia, China, Japan, Korea and Thailand, while many countries in South Asia and Africa are somewhat behind,” Perez said.

“The Philippines is in the demographic window of opportunity,” he added.

Popcom said the latest PSA data showed a steady growth in the Philippines’ working-age population, as the 15 to 64 age group now makes up 63.9 percent of the population.

While the increased longevity and improved health at older ages seen in many countries are some of the crowning achievements of the 20th century, the US Department of Health and Human Services noted that these trends also presented significant challenges.

“Societal aging can affect economic growth, patterns of work and retirement, the way that families function, the ability of governments and communities to provide adequate resources for older adults, and the prevalence of chronic disease and disability,” it pointed out.

In 2019, Popcom noted that 55 percent of the country’s senior citizens had no pension. Those without pension were automatically labeled as persons living in poverty.

The International Monetary Fund (IMF), in a paper titled “Cost of Aging” published in March 2017, warned that “an aging population and slower labor force growth affect economies in many ways — the growth of [the economy] slows, working-age people pay more to support the elderly, and public budgets strain under the burden of the higher total cost of health and retirement programs for old people.”

The case for the Philippines shows that the phenomenon may just be starting. The aging society problem is more pronounced in some developed countries, particularly Japan where the ratio of old population to working population was highest at 46.2 percent as early as 2015, according to a 2019 policy paper of the G-20 group of industrialized countries.

It warned, however, that the impact of population aging would be enormous and multifaceted especially for developing economies like the Philippines, as this phenomenon of rapid population aging, before sufficient economic development, usually raises economic and social challenges particular in terms of sluggish economic growth and fiscal sustainability, namely a decline in tax revenues, an increase in government public expenditure, and lack of adequate welfare system.

Meanwhile, Perez attributed the decline in fertility levels in the past few years “as evidenced by the lower number of children born since 2015” to the effectiveness of the family planning program.

“We need to have stable population growth that is manageable through support from national programs. That would mean ideally a population growth rate of 1 percent so we can maintain a good number of effective workers who can support older, retired or partly retired seniors,” he argued.

He said the country’s population was growing at 1.6 percent rate before the COVID-19 pandemic hit in 2020.