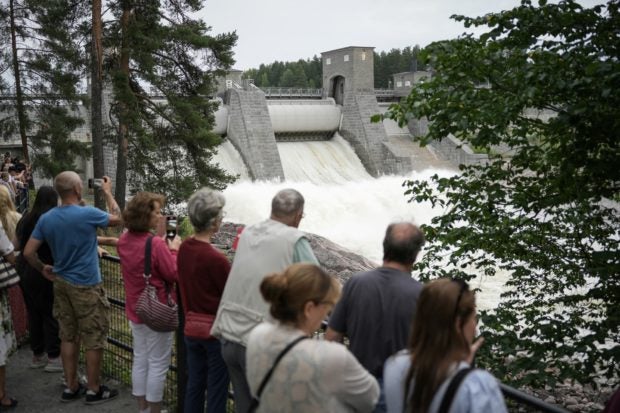 Tourists gather on the bridge over the Vuoksi river near The Imatra Rapids in Imatra, Finland, on August 12, 2022. AFP

LAPPEENRANTA, Finland — A crowd of people gathers in the Eastern Finnish city of Imatra on a bridge overlooking Imatrankoski rapids, one of the Nordic country’s most well-known natural attractions.

At the same time every day, the river’s almost century-old dam is opened and water rushes under the bridge, to the sound of music by Finnish composer Jean Sibelius.

It is a popular attraction especially for Russian tourists. Even Catherine the Great, Empress of Russia, visited Imatrankoski in 1772.

But since the end of July, the city of Imatra has started the show by playing the Ukrainian national anthem, to protest the Russian invasion.

“This is bad for the Russians who love Finland,” says Mark Kosykh, a 44-year-old Russian tourist who has come to see the rapids with his family.

“But we understand the government of Finland,” he says.

Kosykh emphasises that there are Russians who do not like the war.

“Not all Russians are for Putin. The government and all people must understand this.”

Also in the nearby city of Lappeenranta, the Ukrainian national anthem is played every evening above its city hall, overlooking shopping centres popular with Russian tourists.

“The aim is to express strong support for Ukraine and to condemn the war of aggression,” Lappeenranta’s Mayor Kimmo Jarva told AFP.

Many Russians visit Lappeenranta to shop for clothes and cosmetics, for example, and Russian number plates can be seen on numerous cars.

But tourism from its eastern neighbour has caused discontent in Finland due to the war in Ukraine.

“In my opinion, they should be restricted very strongly. I don’t see any other way to make Russian politicians think,” Lappeenranta local Antero Ahtiainen, 57, says.

Although he has nothing against individual tourists, Ahtiainen says his relationship with Russians has changed.

The Nordic country remains Russia’s only EU neighbour without restrictions on tourist visas to Russian citizens.

As flights from Russia to the EU have been halted, Finland has become a transit country for many Russians seeking to travel further into Europe.

“Many saw this as a circumvention of the sanctions regime,” Foreign Minister Pekka Haavisto told AFP.

Although the Schengen regime and Finnish law do not allow for an outright ban on visas based on nationality, Finland can reduce visa numbers issued based on category, Haavisto noted.

“Tourism category can be restricted in the terms of how many visas can be applied for in a day,” Haavisto said.

Haavisto said he believed the final decision to adopt the plan could be taken by the end of the month.

Although many Finns are unhappy with Russian visitors now, traditionally people on both sides of the border region have lived in close contact with each other.

“In Saint Petersburg, many people have grandpapas and grandmamas from Finland, like my wife,” Kosykh says and adds that he visits Finland every year.

Russian tourists are also an essential source of income for many Finnish border towns.

After Russia lifted Covid travel restrictions on July 15, the number of Russian tourists heading to Finland has steadily increased.

While the numbers are still well below pre-Covid levels, there were more than 230,000 border crossings in July — up on the 125,000 seen in June.

“Of course, if Russian tourists do not come here, there will be a loss of income for businesses, which is unfortunate,” Jarva says.

But Jarva believes that there is strong support for limiting Russian tourist visas.

“We have to make a choice. We are strongly behind Ukraine.”