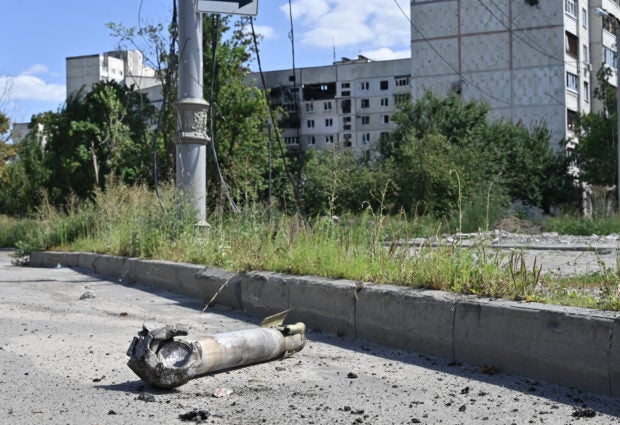 A fragment of a rocket lays on a road following a Russian strike in Saltivka, a northern district of the second largest Ukrainian city of Kharkiv on July 31, 2022, amid the Russian invasion of Ukraine. AFP

BAKHMUT, Ukraine — When rockets scream across the skies of eastern Ukraine the people below are hostage to fortune.

A soldier racing through a frontline town in a drab pickup truck may take a direct hit only to be saved by a miracle.

An elderly woman slumbering in her apartment is tossed across her bedroom — spared from the havoc next door by a cracked partition wall, her alarm clock frozen at the moment of the strike.

A serviceman who has rotated off the frontline takes a moment to relax, only to come under fire at the exact moment he has let his guard down.

All have survived, for now at least, on the eastern front of the war between Russia and Ukraine where life and death seem a simple matter of chance.

Since Russia failed to storm Kyiv after its February invasion, the military campaign has shifted to regions pressed against the border with its larger neighbour.

There has been fighting here since 2014, when Moscow annexed the southeastern Crimean peninsula and began backing pro-Russia separatists in the eastern Donbas area.

Although Russia has made advances, Ukraine has put up a staunch resistance and both sides are dug in, with rallies of artillery and countering fire determining the taxing course of the conflict.

For soldiers and civilians alike, the lob of munitions — some inaccurate, others seemingly random — introduces an almost unbearable element of chance.

“We sit in the trenches, the enemy shells us and we can’t even stick our heads out,” said 26-year-old Ukrainian soldier Bogdan, perched in the bed of his pickup truck in the frontline city of Bakhmut.

“Now there are no gunfire fights as there used to be. Today it is an artillery battle. So, you just jump into the trench and wait for the strike.”

The cab of Bogdan’s truck was speared by the remains of a rocket, which fell from the sky after jettisoning its explosive load.

His hand still shakes from the encounter.

In the back of the vehicle he holds up the gnarled metal that almost stole his life before throwing it down with a look of disdain.

The city of Kostyantynivka — set back from the frontline but unspared from its random violence — was pummelled by air strikes last weekend.

Seven people were injured, according to the regional military administration.

A four-floor apartment building was gouged by the blast, a vast semicircle of sky replacing the space where two homes once stood.

From a window a man lowers a sewing machine by rope, as residents try to salvage what they can.

Up a dusty staircase, clogged with rubble and twisted metal, is Ievgeniya Iefimenko, 82.

She was dozing when the twin blasts hit — one elsewhere and another demolishing her neighbour’s flat and halting her bedside clock at 12:24 am.

“There were explosions before but they were somewhere further away, so I had gotten used to it,” she said, restless with distress, her eyes spouting tears.

“I was thrown over there,” she said, gesturing to a wall and puzzling the ill luck that has made her homeless.

On a road outside the frontline city of Soledar, serviceman Oleg Yashchuk recounts his own near-miss in an almost giddy tone.

“I returned from the positions, I had three or four days off, so we went to relax at the lake — barbecue, beer, nice company,” he starts. “Suddenly a tank started shooting at us.”

“It shot into the gazebo, into the water, where there were many soldiers,” he says.

“We miraculously survived, all the fragments got stuck in the water, that’s why are still alive.”

In the distance the sounds of fresh shelling can be heard — others may not be so fortunate.