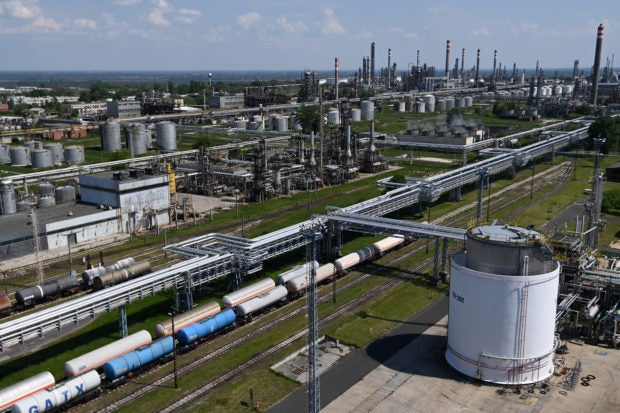 A photo taken on May 5, 2022 shows a general view of the Duna (Danube) Refinery of Hungarian MOL Company near the town of Szazhalombatta, about 30 km south of Budapest. – Europe faces the prospect of a diesel supply shortage following sanctions on Russia. MOL’s Duna Refinery continues to receive Russian crude through the Druzhba pipeline. (Photo by ATTILA KISBENEDEK / AFP)

BUDAPEST – Hungary said Saturday that Russia has started delivering additional gas to the EU member following a July visit to Moscow by its foreign minister.

Hungary’s Foreign Ministry said trade negotiations with Moscow “led to an agreement”, resulting in Russia’s Gazprom starting to deliver “above the already contracted quantities” on Friday.

“It is the duty of the Hungarian government to ensure the country’s safe supply of natural gas, and we are living up to it,” ministry official Tamas Menczer said on his Facebook page.

In the first phase, an additional volume of 2.6 million cubic meters per day will arrive from the south through the TurkStream pipeline until the end of August, he said, adding negotiations were underway for September deliveries.

Hungarian Foreign Minister Peter Szijjarto made a previously unannounced visit to Moscow in July to discuss the purchase of an additional 700 million cubic metres of natural gas.

“In light of what is known about the current European market conditions, it is clear that the acquisition of such a large amount is impossible without Russian sources,” Menczer said in the post on Saturday, mentioning Szijjarto’s visit.

An EU plan to cut gas consumption across the bloc by 15 percent to cope with an energy price crisis spurred by Russia’s war in Ukraine came into effect this week.

Some EU countries, though, had carve-outs from strictly following the rule, which was in any case termed a “voluntary demand reduction”.

Hungary, which relies on gas piped in directly from Russia, had demanded the exception.