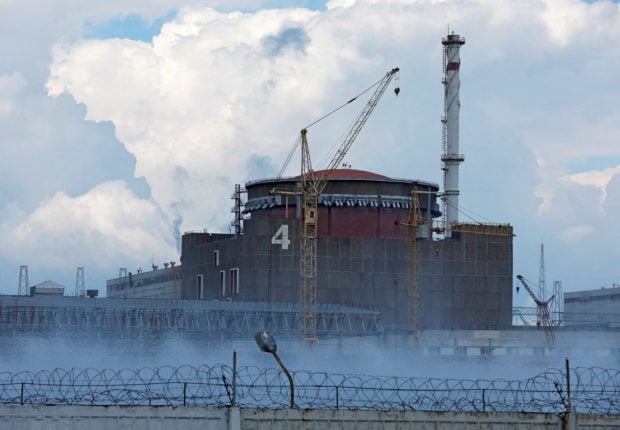 A view shows the Zaporizhzhia Nuclear Power Plant in the course of Ukraine-Russia conflict outside the Russian-controlled city of Enerhodar in the Zaporizhzhia region, Ukraine August 4, 2022. (REUTERS/File Photo)

KYIV  – Ukraine and Russia accused each other on Friday of risking catastrophe by shelling Europe’s largest nuclear power plant, occupied by Russian forces in a region expected to become one of the next big front lines of the war.

Western countries have called for Moscow to withdraw its troops from the Zaporizhzhia plant, but there has been no sign so far of Russia agreeing to move its troops out of the facility they seized in March.

The plant dominates the south bank of a vast reservoir on the Dnipro river that cuts across southern Ukraine. Ukrainian forces controlling the towns and cities on the opposite bank have come under intense bombardment from the Russian-held side.

Three civilians, including a boy, were wounded in overnight shelling of one of those towns, Marhanets, the governor of the Dnipropetrovsk region, Valentyn Reznichenko, said in the latest in a string of similar reports.

Kyiv has said for weeks it is planning a counteroffensive to recapture Zaporizhzhia and neighbouring Kherson provinces, the largest part of the territory Russia seized after its Feb. 24 invasion still in Russian hands.

Ukraine’s military said its artillery destroyed a Russian ammunition depot near a bridge about 80 miles (130 km) down the Dnipro river from the plant on Friday, and said it could now strike nearly all Moscow’s supply lines in the occupied south.

There was no immediate comment from Russian authorities on the report of the attack in Kherson province, or the purported reach of Ukraine’s firepower. Reuters could not confirm the reports independently.

Ukraine’s Energoatom agency, whose workers still operate the Zaporizhzhia plant under Russian occupation, said the power station was struck five times on Thursday, including near where radioactive materials are stored.

Russia says Ukraine is recklessly firing at the plant. Kyiv says Russian troops struck it themselves, and are also using the plant as a shield to provide cover while they bombard nearby Ukrainian-held towns and cities. Reuters could not verify either account.

“The Ukrainian Armed Forces do not damage the infrastructure (of the plant), do not strike where there may be a danger on a global scale. We understand that the invaders are hiding behind such a shield because it is not possible to strike there,” Natalia Humeniuk, spokesperson for Ukraine’s southern military command, told Ukrainian national television.

!There is no nuclear power plant in the world that was designed to operate in a war situation,” Mycle Schneider, coordinator of the World Nuclear Industry Status Report, told Reuters.

Beyond a shell strike, a loss of electrical supply needed to keep the reactors cooled and the psychological state of the plant’s Ukrainian workers were major concerns, he added.

“You have to imagine these people don’t even know whether their families are still alive, whether their home is still existing with the war going on really close in the neighbourhood.”

The main Ukrainian front lines have been comparatively static in recent weeks, but fighting has been intensifying lately in anticipation of what Ukraine says is a planned counter-offensive in the south.

Ukraine’s General Staff on Friday reported widespread shelling and air attacks by Russian forces on scores of towns and military bases, especially in the east where Russia is trying to expand territory held on behalf of separatist proxies.

One shell hit the road outside 74-year-old Ityna’s home in the eastern Ukrainian-held town of Kramatorsk on Friday morning, less than 12 miles from the frontline.

“Everything is destroyed. The windows are gone, the roof on one side is gone,” said the pensioner, who only gave her first name. “When it rains everything will be wet inside. What now? We don’t have the resources to leave. Where would we go?”

Pavlo Kyrylenko, governor of the eastern Donetsk region, said on Telegram seven civilians had been killed and 14 wounded in the past 24 hours.

Kyiv hopes that by acquiring new missiles capable of striking Russian logistics deep behind the front lines, it can turn the tide of the conflict in coming weeks.

Satellite pictures released on Thursday showed devastation at an air base deep in Russian-annexed Crimea, struck on Tuesday in what appeared to be some form of attack, although Kyiv has not claimed responsibility or explained how it was carried out.

The base, on the southwest coast of Crimea, is beyond the range of advanced U.S. rockets Ukraine has deployed since last month, but within the range of more powerful versions that Kyiv has requested from the West.