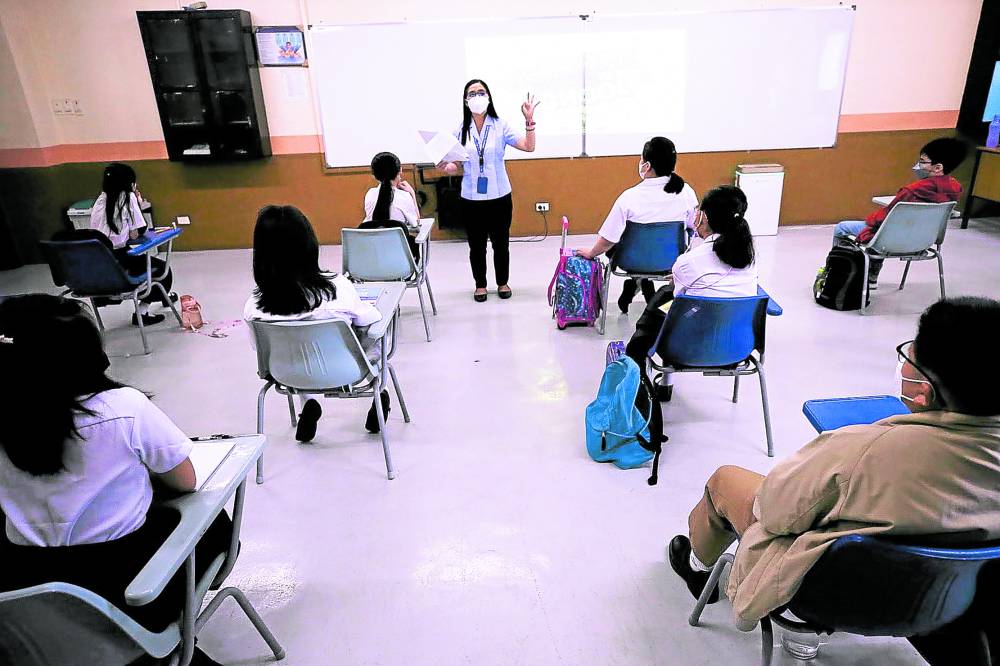 MAKING DO Unlike private schools, public schools especially in the provinces do not have a budget to hire security and thus rely on their own resourcefulness if they need such service. —RICHARD A. REYES

The Department of Education (DepEd) wants at least one security guard for every public school in the country, following recent reports about rapes and robberies in two campuses in Camarines Sur province.

In a statement on Friday, DepEd said it is drafting a joint memorandum circular with the Department of the Interior and Local Government (DILG) and Department of Budget and Management, to allow the local governments to use their Special Education Fund (SEF) to hire at least one security guard per school.

The draft order will also prohibit the use of schools as isolation facilities, quarantine facilities and long-term evacuation centers, in preparation for the implementation of full in-person classes by November.

DepEd also said it “strongly condemns” the abuse committed against four elementary school teachers in the municipality of Ocampo, Camarines Sur, as they were preparing for the school year set to open on August 22.

“We denounce any acts of violence and injustice towards our teachers, who have been showing their dedication and effort to deliver equitable, resilient, inclusive and quality education to our learners,” the department said—adding that it has instructed the field office concerned to coordinate with the authorities in their investigation and provide the necessary aid to the victims.

“We hope our local authorities in Camarines Sur will conduct a swift investigation and bring justice to the family of the victims. We likewise call on our partner agencies in preparation for the upcoming school opening, especially the Philippine National Police, to protect the welfare of our teachers, learners, and parents inside and outside the premises of our schools,” DepEd said.

The Alliance of Concerned Teachers (ACT) also condemned the incident.

“We demand that the culprits be swiftly arrested and meted with punishment so that justice may be served to our colleagues who have been attacked by armed perpetrators and were traumatized by the incident,” the group said.

ACT also said that the incident should serve as “a wake-up call for the government [which has] neglected our schools for so long that [it] cannot even employ security personnel to guard the safety of our teachers and learners.”

According to a police report from Ocampo, a man entered a classroom around noon last Monday, saying he was going to enroll his children.

He then pulled out a gun and declared a holdup, and seized P200 as well as the mobile phones of the four teachers.

READ: Children’s nightmare: Violence, death at the hands of people they trust most

He also ordered the teachers to strip, and sexually assaulted two of them inside a comfort room.

The police said they already have the identity of the suspect, who remains at large.

Two days later, robbers broke into an office at Libmanan North Central School in the municipality of the same name, also in Camarines Sur.

Three desktop computers, three monitors and a 52-inch smart TV, all later estimated at a total cost of P133,500, were among the items taken from that office.

Like the school in Ocampo, there was no security guard employed in this school.

Public schools, especially in the provinces, could not hire security guards due to lack of funding.

Instead the schools ask their local governments, particularly the barangay watchmen, to provide security. Police officers are also deployed, but only outside the schools.

If private guards are hired, their salaries are taken from the schools’ maintenance and other operating expenses (MOOEs).

But schools prioritize spending their MOOEs for payment of instruction materials, office supplies, printing and minor repairs of classrooms and furniture.

They also turn to parents-teachers associations for the salary of a security guard or barangay watchman.

Your subscription could not be saved. Please try again.
Your subscription has been successful.
Read Next
WHAT WENT BEFORE: School libraries targeted first
EDITORS' PICK
Omega Speedmaster super racing: Tiny device massive change
Fuel price rollback expected on Feb 7
House energy committee chair Arroyo bats for cheap electricity
Philippine-United States alliance ‘rock solid’ — DFA
Makabayan bloc blasts bid to expand US access to more military bases in PH
vivo Philippines offers a free bouquet of flowers and a premium necklace perfect for Valentine’s Day
MOST READ
Vice Ganda gets called out for ‘unfair treatment’ of ‘It’s Showtime’ co-host Karylle
Fuel price rollback expected on Feb 7
Kris Aquino gets ‘renewed confidence’ after consultation with new doctor: ‘I have a strong chance of getting better’
Pokwang tells self amid revelations on past relationship: ‘Bangon, nanay ka’
Don't miss out on the latest news and information.