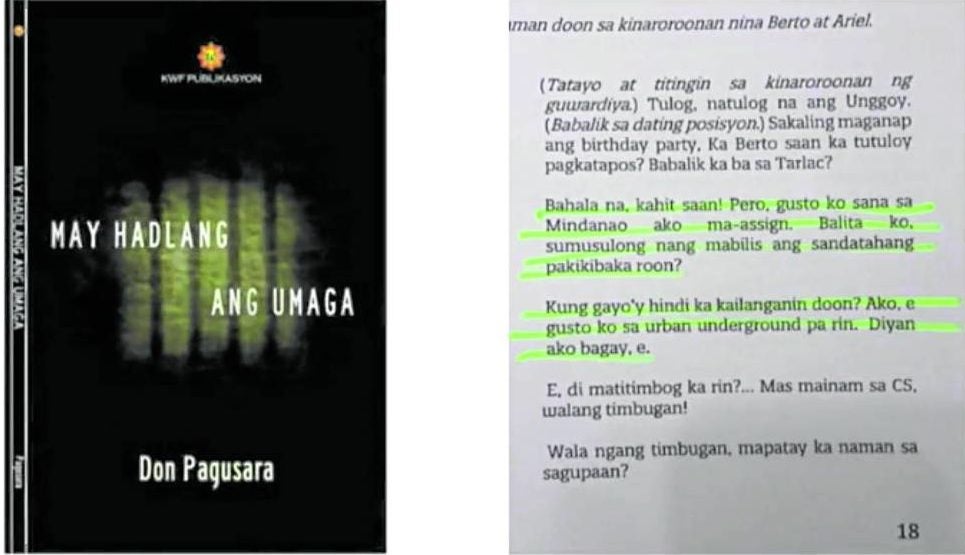 IT’S ONLY WORDS Images taken from the Facebook page of the SMNI network show two of the five book projects ordered terminated by the Komisyon ng Wikang Filipino (KWF), in a move denounced by academic and literary circles as well as some lawmakers as outright censorship. The highlighted texts purportedly show why the national language commission found the works “subversive.” The KWF is not the first government body, however, to go after publications that have already passed scholarly or editorial review but are now deemed dangerous for young Filipino minds.

Some of the country’s most prominent writers’ groups are up in arms over the Komisyon ng Wikang Filipino’s (KWF) order to cease the publication and distribution of several titles it deemed to have “subversive” content.

“It is alarming and we must be vigilant against the constant Red-tagging of writers and their books on a recent TV program,” according to the largest of the groups, the Unyon ng mga Manunulat ng Pilipinas (Umpil), referring to a show on the pro-government network SMNI that aired materials describing the five Filipino-language titles as antigovernment.

“The writers, including the late National Artist for Literature Bienvenido Lumbera, were connected to allegedly radical and terrorist action under the antiterrorism law,” the group said in a statement in Filipino.

On August 9, KWF Commissioners Carmelita Abdurahman and Benjamin Mendillo Jr. issued a memorandum to cease printing of the “political, subversive and creative literary works with subliminal ideologies that encourage to fight the government.” 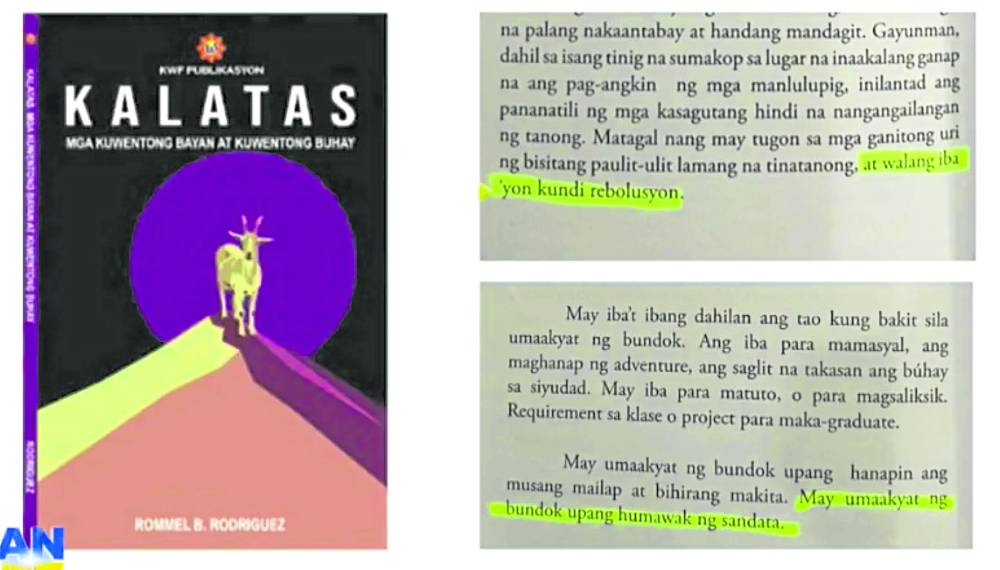 Three of the books – ”Teatro Politikal Dos,” “Kalatas” and “May Hadlang ang Umaga” – had already been published by the commission and featured in the “KWF Publikasyon Paglulunsad 2022” on April 29.

The KWF commissioners had halted the printing of the books so that it would not be held “accountable” under Republic Act No. 11479, or the Anti-Terrorism Act of 2020, which the Supreme Court ruled constitutional except for two provisions.

The Umpil statement said creative writing and research were legitimate actions in a society that values democracy, freedom of expression and productive discourse, the only ways to raise the level of critical thinking and responsible citizenship. Aside from the need to defend the free discussion of information and ideas as well as the rights of creativity and academic research, the group called for discernment in information being used as a basis to Red-tag individuals, calling flagrant Red-tagging, or linking activists or critics to the communist movement, counterproductive to any goal of unity.

“This is not worthwhile practice. This is not the solution to society’s ills. This is destructive to any goal of unity,” Umpil said.The Manila Critics Circle (MCC) released its own statement expressing outrage, especially at the “Red-tagging insinuations against the late National Artist for Literature Bienvenido Lumbera and esteemed scholar Alice Guillermo.”

“We call upon SMNI network to stop misleading the public with bogus information and making unfounded allegations of ‘terrorism’ against journalists, writers and academics,” the group said, referring to the network’s “Laban Kasama ng Bayan” program, which, along with Lorraine Badoy of the National Task Force to End Local Communist Armed Conflict, labeled the KWF as distributors of “terrorist propaganda.”

MCC also appealed to the KWF commissioners to retract their memorandum stopping the publication of the five books and 17 other publications. “Let truth prevail upon this land. And the truth shall set the writers and intellectuals free,” it said.

The Philippine Center of the International PEN (Poets & Playwrights, Essayists, Novelists) secretary general Lito Zulueta said the group was against Red-tagging of books in principle but, as other sources had intimated, added that the KWF issue was also an internal one.

Not what it seems

“Now as then the Philippine PEN has condemned all forms of Red-tagging,” he said. “But I understand that the issue at the KWF is not what it seems. It appears that KWF commissioners have filed a graft case against chair Arthur Casanova for unilaterally approving the publication of books and other printed materials, said to be written by his friends, without the Board’s approval, among other complaints,” Zulueta said, citing accusations made by the KWF commissioners against its current chair.

Casanova has denied railroading the publication of the books.“Books on linguistics, language research, and related fields of scholarship that were approved by the Board reportedly have not been published. The case has been filed and I am just citing the public document in the interest of public information,” Zulueta said.

“Perhaps the new administration should look into this rather than go along with the dangerous Red-tagging by the usual suspects from national security-mad circles of government,” he added.

Read Next
Authors unbowed after gov’t ‘purge’ of books
EDITORS' PICK
Percy Lapid’s kin: ‘We demand that his cowardly assassins be brought to justice’
Nothing’s certain so here’s how everyday Filipinos can make the most out of their Plan B
Do all the things you do, faster
PNP vows to bring justice for slain Percy Lapid; says probe underway
House energy committee chair Arroyo bats for cheap electricity
‘Seniority’ requirement despite vacant posts in DOH bothers senators
MOST READ
Student stabs teacher dead in Samar town
Trixie Angeles quits as press secretary due to health reasons
Not rehired?: Trixie Angeles not on list of reappointed Cabinet execs
Heart Evangelista to stay abroad ‘indefinitely’: ‘Hindi muna ako babalik’
Don't miss out on the latest news and information.