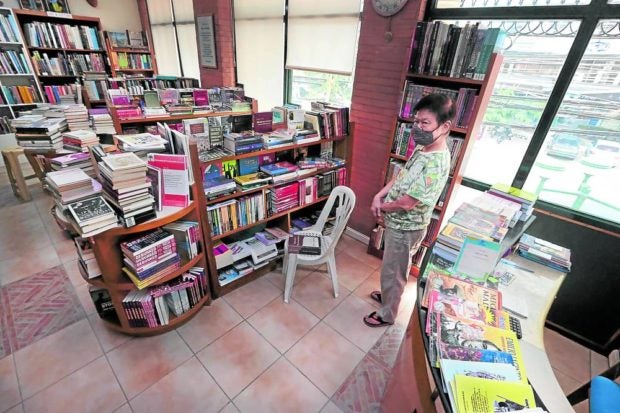 ‘INTELLECTUAL MECCA’ Geraldine Po, manager of Popular Bookstore, attends to the day’s business a day after the store was red-tagged. —GRIG C. MONTEGRANDE

Three SMNI broadcasters previously labeled 17 novels as “subversive” and claimed their authors were affiliated with the Communist Party of the Philippines and its military arm, the New People’s Army.

“In answer to the allegations circulating in news media and online that I, as chair of the Komisyon sa Wikang Filipino (KWF), have allowed the publication of subversive material and allowed the entry of alleged members of the CPP NPA into the KWF, I categorically deny all these allegations,” said Casanova in a Facebook post.

In answer to the allegations circulating in news media and online that I, as chair of the Komisyon sa Wikang Filipino…

Casanova pointed out that the books went through the standard review process of the KWF, adding that these allegations “may already be stepping on the boundaries of freedom of expression and academic freedom.”

“For transparency and good governance, I am ready and willing to divulge any and all information at the proper forum, whether it be through a Congressional hearing or before the proper office in the Office of the President of which the KWF is part,” he said.

His position was supported by over 30 language and culture experts who have signed a statement slamming these allegations, including from the Filipino departments of the Ateneo de Manila University, the University of the Philippines, and the De La Salle University.

(The three hosts outdid gossiping “Mariteses” when they said their “source” was reliable; their information certainly has no credibility because the statements have no basis).

The organization’s joint statement echoed Casanova, saying that citing different ideologies in books is not the same as agreeing with them.

(It is part of the academic freedom of writers, teachers, researchers, and all citizens to read, research, verify, cite, source, and use any reading, whoever may have written or published it).

‘Fahrenheit 451’ in 2021? The purging of ‘subversive books’ in PH state libraries