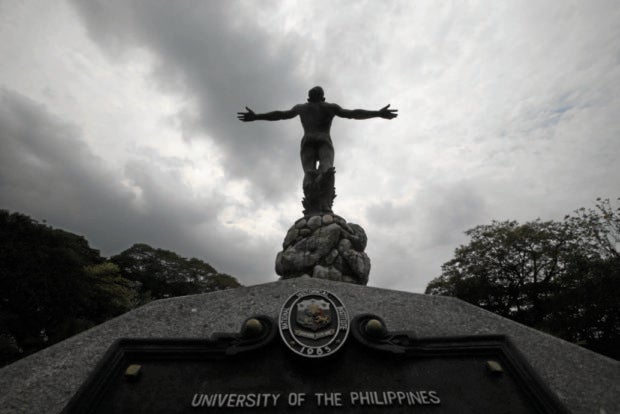 University of the Philippines Oblation statue at UP Diliman in Quezon City.
INQUIRER PHOTO / EDWIN BACASMAS

MANILA, Philippines — The University of the Philippines’ Departamento ng Filipino at Panitikan ng Pilipinas (DFPP) and Makabayan lawmakers have denounced the red-tagging of Filipino authors and language advocates and the Komisyon ng Wikang Filipino (KWF) chairperson.

The UP DFPP asserted Friday that part of the mandate of the KWF as well as Filipino authors and language advocates is to raise awareness about the use of the local language – which broadcast company SMNI and the National Task Force to End Local Communist Armed Conflict (NTF-Elcac) have no right to censure.

(Part of KWF’s mandate is pushing for the advancement of the Filipino language and literature. Publishing new books is part of intellectualization and the spread of the national language.)

(Both SMNI at NTF-Elcac have no right to censure these books whatever their topic may be. This is part of the free speech and free expression which are protected by the 1987 Constitution.)

The UP DFPP also lamented that the red-tagging even happened during the month of August which is being observed as “Buwan ng Wikang Pambansa or the National Language Month.

KWF chair Arthur Casanova has denied allegations that he allowed the books accused of containing subversive ideology to be published continuously.

(The continuous harassment of academics and writers angers us.  Despite the several crises that the country is facing, they chose to put time and attention to this issue. Furthermore, this attack was done during the National Language Month.)

(Since the DFPP was established in 1966, it has pushed for a nationalistic, free, and critical thinking through support for research and creative writing in Filipino. This would not stop us from revealing the truth about society through language and literature.)

According to Casanova, all the books that were labeled “subversive” by his own Commission underwent scrutiny during their review process. He also noted that the comments made during the SMNI program may have been stepping on the boundaries of free speech already.

On Thursday, it was reported that the KWF tagged five books as subversive for allegedly promoting anti-government ideologies because they contain “political, subversive and creative literary works with subliminal ideologies that encourage to fight the government.”

The directive was issued by KWF commissioners Carmelita Abdurahman and Benjamin Mendillo, ordering the Sentro ng Wika at Kultura (SWK) to cease printing the said books.

Lawmakers from the Makabayan bloc also joined condemnation of the KWF order, saying that it appears the Anti-Terror Law and the government’s anti-insurgency task force have started to enter the realm of academics.

(These actions from the KWF and other agencies are disappointing and infuriating. This move is an interference of the Anti-Terror Law and NTF-Elcac in schools, academics, and culture by using disinformation and fake news that books telling the truth and teaching critical thinking is “terrorism” and “enemy of the state.”)

(The same thing happened to Adarna House and other schools of Lumad like the Salugpungan schools. What would be next? A huge book-burning activity, silencing teachers of political philosophy at economy, and threatening writers?)

Kabataan party-list Rep. Raoul Manuel said that people should not be intimidated by such actions.

(We must not cower in fear and allow ourselves to be used by the powerful who want to label the act of reading materials regarding the martial law era and the history of resistance as a terroristic act.)

“We must exercise and defend academic freedom in schools and libraries to promote Filipino history, language and literature,” he added.