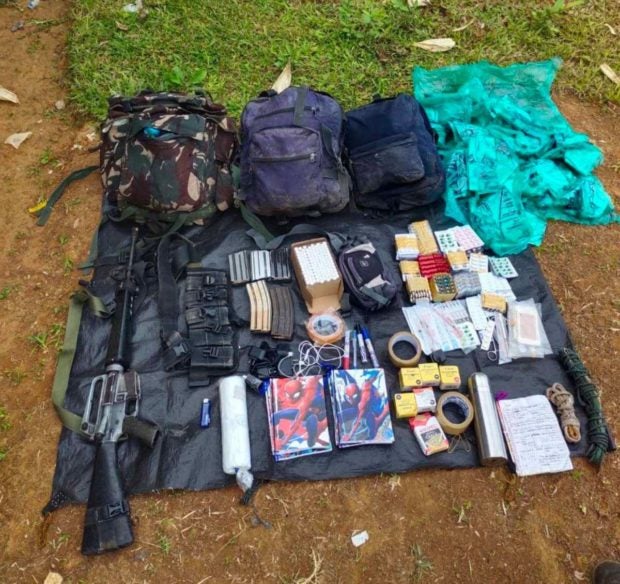 This photo shows pieces of evidence, including a firearm, that were seized by the military following an encounter with alleged members of the New People’s Army in the hinterlands of Bulasot, Brgy Buenavista, Himamaylan City in Negros Oriental on Wednesday, August 10, 2022. Photo from AFP/Philippine Army

In Misamis Oriental, the military said communist rebels and government troops under the 58th Infantry Battalion figured in a 20-minute firefight in Sitio Haruhay, Barangay Lunotan, Gingoog City on Thursday morning, leading to the death of still-unidentified male and female alleged members of the group.

The military said they conducted the combat operations after receiving reports from concerned civilians who encountered the alleged NPA rebels.

Seized in the said skirmish are two M16 rifles and one improvised explosive device and other materials, according to the military.

In Negros Oriental, one alleged NPA rebel was killed and one firearm was seized from the scene after the 94th Infantry Battalion figured in a 30-minute gun battle with the communist group in the hinterlands of Bulasot, Brgy Buenavista, Himamaylan City on Wednesday morning.

The military said troops conducted a combat operation in the area after receiving a “reliable information” from the locals about the presence of NPA rebels purportedly engaging in extortion activity in the adjacent barangay.