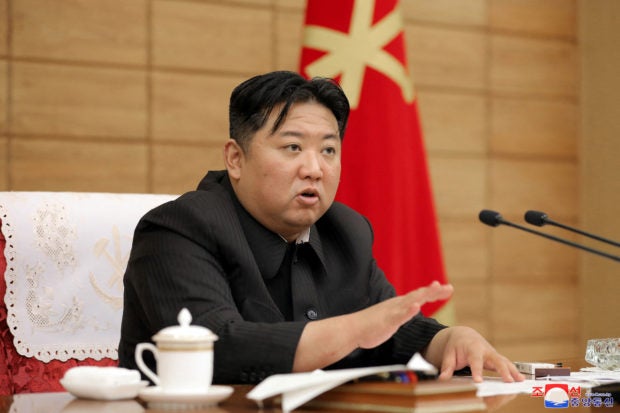 SEOUL — North Korea’s Kim Jong Un declared victory in the battle against COVID-19 on Thursday, with the leader’s sister revealing he had suffered from fever and vowing “deadly retaliation” against South Korea which it blames for causing the outbreak.

Kim ordered a lifting of maximum anti-epidemic measures imposed in May, adding that North Korea must maintain a “steel-strong anti-epidemic barrier and intensifying the anti-epidemic work until the end of the global health crisis,” according to a report by state news agency KCNA.

North Korea has never confirmed how many people caught COVID-19, apparently lacking testing supplies. It had instead reported daily numbers of fever patients, which totalled some 4.77 million, but has registered no new such cases since July 29.

Kim’s sister, Kim Yo Jong, said the young leader himself had suffered from fever symptoms, according to KCNA, indicating for the first time that he might have been infected with the virus.

“Even though he was seriously ill with a high fever, he could not lie down for a moment thinking about the people he had to take care of until the end in the face of the anti-epidemic war,” she said in remarks at a meeting on Wednesday to review the country’s anti-epidemic responses.

She did not elaborate on Kim’s health, but blamed leaflets from South Korea found near the border for causing the outbreak.

North Korean defectors and activists in the South had for decades sent balloons carrying anti-Pyongyang leaflets to the North, alongside food, medicine, money and other items.

Kim Yo Jong criticized Seoul’s new government of President Yoon Suk-yeol for seeking to lift a 2020 ban on those campaigns, calling it an “invariable principal enemy.”

“We can no longer overlook the uninterrupted influx of rubbish from South Korea,” she said, threatening to “wipe out” Seoul’s authorities. “Our countermeasure must be a deadly retaliatory one.”

Analysts said although the authoritarian North has used the pandemic to tighten social controls, its victory declaration could be a prelude to restoring trade hampered by border lockdowns and other restrictions.

Observers have also said it may clear the way for the North to conduct its first nuclear weapon test since 2017.

“The meeting seems primarily aimed at fostering unity among the people, but could also be to send a message to China that they’re COVID-free and ready to restart trade,” said Yang Moo-jin, a professor at the University of North Korean Studies in Seoul.

North Korea’s official death rate of 0.0016%, or 74 out of some 4.77 million, is an “unprecedented miracle,” anti-COVID chief Ri Chung Gil told the meeting.

The World Health Organization has cast doubts on North Korea’s claims, saying in June the situation could be getting worse.

“Whatever the truth behind the numbers, this is the story being told to the North Korean citizens. And right now the numbers are telling them that the epidemic is over,” said Martyn Williams, a researcher with the U.S.-based 38 North Project, who has been tracking North Korean case reports.

Like other countries, North Korea is likely balancing the need for control – whether for political or medical reasons – with public fatigue over restrictions, he said.

“As of Wednesday evening, state TV was still showing 100% mask wearing in public activities but the longer cases remain at zero, I think the greater the public will question the continued limitations on their lives,” Williams said.

Pyongyang’s declaration of victory over COVID comes despite no known vaccine programme. Instead, the country says it relied on lockdowns, homegrown medicine treatments, and what Kim called the “advantageous Korean-style socialist system.”