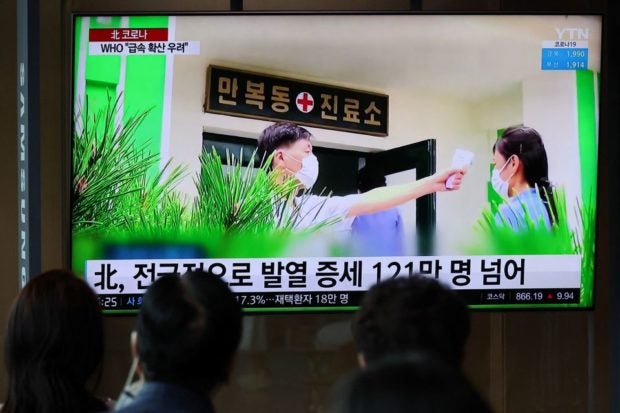 People watch a TV broadcasting a news report on the coronavirus disease (COVID-19) outbreak in North Korea, at a railway station in Seoul, South Korea, May 17, 2022. REUTERS

SEOUL — North Korea is on the path to “finally defuse” a crisis stemming from its first acknowledged outbreak of COVID-19, the state news agency said on Monday, while Asian neighbors battle a fresh wave of infections driven by Omicron subvariants.

The North says 99.98% of its 4.77 million fever patients since late April have fully recovered, but due to an apparent lack of testing, it has not released any figures of those that proved positive.

“The anti-epidemic campaign is improved to finally defuse the crisis completely,” KCNA said. It added that the North had reported 310 more people with fever symptoms.

The World Health Organization has cast doubts on North Korea’s claims, saying last month it believed the situation was getting worse, not better, amid an absence of independent data.

The North’s declaration could be a prelude to restoring trade long hampered by the pandemic, one analyst said.

“Under the current trend, North Korea could announce in less than a month that its COVID crisis is over and that could be a prelude to resuming cross-border trade,” said Cheong Seong-chang, director of the Sejong Institute’s North Korea studies center in South Korea.

Analysts say the authoritarian North has used the pandemic to tighten already strict social controls. Pyongyang blamed its outbreak on “alien things” near its border with the South, urging its people to avoid anything that comes from outside.

Daily new cases of fever in North Korea reported by KCNA have been declining since the reclusive country first acknowledged in mid-May that it was battling an outbreak of COVID-19.

Lacking a public vaccination effort, the North said it was running intensive medical checks nationwide, with daily PCR tests on water collected in borderline areas among the measures.

The North also said it has been developing new methods to better detect the virus and its variants, as well as other infectious diseases, such as monkeypox.

North Korea’s claim of “anti-epidemic stability” comes as other Asian countries grapple with a new wave of infections. China reported 691 new cases for Saturday with locally transmitted infections at a peak since May 23.

In the neighboring South, daily COVID infections jumped on Tuesday above 40,000 for the first time in two months, with authorities and experts predicting hundreds of thousands of new cases in coming weeks.

Japan also warned that a new wave of infections appeared to be spreading rapidly, as Prime Minister Fumio Kishida called for special care ahead of school summer vacations.

Tokyo’s 16,878 new cases on Wednesday were the highest since February, while the nationwide tally rose above 90,000, in a recent surge of infections to levels unseen since early this year.

How bad could Omicron get in North Korea?