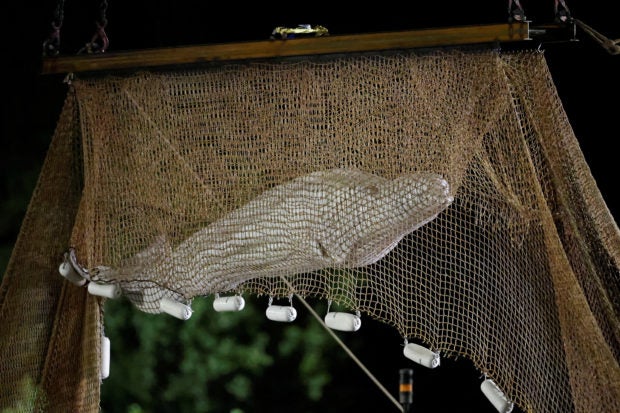 Firefighters and members of a search and rescue team pull up a net as they rescue a Beluga whale which strayed into the France’s Seine river, near the Notre-Dame-de-la-Garenne lock in Saint-Pierre-la-Garenne, France, August 10, 2022. REUTERS/Benoit Tessier

PARIS — The beluga whale that was lifted out of the River Seine earlier on Wednesday has died, despite the mission to save it, according to local authorities.

“Despite an unprecedented rescue operation for the beluga, we are sad to announce the death of the cetacean,” the prefect of the Calvados department, said on Twitter.

The beluga whale, whose life was at risk after it strayed into the River Seine, was lifted out of the water early on Wednesday as authorities worked on its rescue.

The extraction of the 800 kg (1,760 lb) cetacean, which took six hours, was witnessed by a Reuters photographer and by the marine conservation group Sea Shepherd France.

READ: Beluga whale lifted out of River Seine by rescuers, trucked to Normandy

The all-white beluga had swum nearly halfway to Paris before local authorities confined it in a large lock system. It was being transported in a refrigerated lorry to the coastal town of Ouistreham, in Normandy, where it was planned to be put in a saltwater lock.