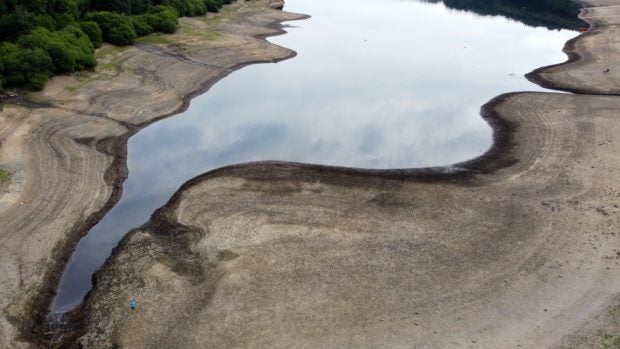 An aerial view shows the low water level at Scammonden Reservoir, west of Huddersfield, in northern England on July 17, 2022. AFP

LONDON — The UK’s meteorological agency on Tuesday issued an “amber” warning for extreme heat while the country’s biggest water provider said restrictions loom, as Britain braces for another punishing heatwave later this week.

The warning by the Met Office, covering much of southern England and parts of eastern Wales from Thursday through Sunday, predicts possible impacts to health, transport and infrastructure from the heat.

Temperatures are set to soar to the mid-30s Celsius for several days, it noted.

The sweltering conditions come just weeks after the last heatwave pushed the mercury over 40 degrees Celsius (104 degrees Fahrenheit) for the first time in Britain.

Climate scientists overwhelmingly agree that carbon emissions from humans burning fossil fuels are heating the planet, raising the risk and severity of droughts, heatwaves, and other extreme weather events.

“Thanks to persistent high pressure over the UK, temperatures will be rising day-on-day through this week and an extreme heat warning has been issued,” Met Office deputy chief meteorologist Dan Rudman said in a statement.

Months of exceptionally dry weather across England are taking their toll, with Thames Water — which supplies London and its surroundings — the latest water provider to warn of imminent restrictions.

The firm said it is planning to issue a so-called hosepipe ban in the coming weeks “given the long-term forecast” of hot and dry weather for the southeast.

Several other UK water suppliers have already announced similar moves ahead of this week’s heatwave, but Thames Water’s 15 million customers would make it the most impactful so far.

The Met Office has confirmed it was the driest July in England since 1935, and little or no rain is forecast for most of the parched areas in the short term.

“Water companies are already managing the unprecedented effects of the driest winter and spring since the 1970s,” said Peter Jenkins, of Water UK, which represents the industry.

“With more hot, dry weather forecast, it’s crucial we be even more mindful of our water use to minimise spikes in demand and ensure there’s enough to go around.”

The parched conditions have seen wildfires break out near houses, including on the outskirts of London, a relatively rare occurrence in Britain.

In neighbouring France, a “historic” drought currently exacerbated by a third extreme heatwave this summer has seen a spate of wildfires nationwide as well as water restrictions ordered in nearly all its 96 mainland departments.

More than 47,000 hectares have already burnt in France this year, including a record amount in July alone, according to the European Union’s satellite monitoring service EFFIS.

On Tuesday, more than 3,000 people in southern France’s Aveyron region, including holidaymakers, were evacuated as a fire swept through at least 700 hectares of vegetation without causing any injuries.