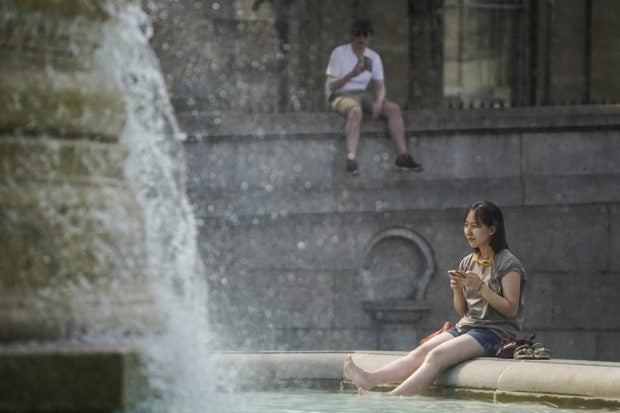 A woman cools off by dipping her feet in the fountain of Trafalgar Square, in central London, on July 18, 2022 as the country experiences an extreme heat wave. Britain could hit 40 Celsius (104 Fahrenheit) for the first time, forecasters said, causing havoc in a country unprepared for the onslaught of extreme heat that authorities said was putting lives at risk. (Photo by Niklas HALLE’N / AFP)

“If confirmed, this will be the highest temperature ever recorded in the UK,” the Met Office meteorological agency said.

“Temperatures are likely to rise further through today,” it added, with predictions that Britain would breach the 40C mark for the first time.

Experts blame climate change for the latest heatwave and note the more frequent extreme weather will only worsen in years to come.

The high temperatures have triggered an unprecedented red alert for extreme heat in much of England and Wales, where some rail lines were closed as a precaution and schools shuttered in some areas.

“A lot of our infrastructure is just not built for this temperature,” Transport Secretary Grant Shapps told Sky News.

In France, various towns and cities in the country’s west registered their highest-ever temperatures Monday, the national weather office said.

As the heatwave moves northeast Tuesday, replaced by cooler air from the Atlantic offering some respite, weather authorities lifted their top red alert level in 15 departments.

But dozens of departments remained on orange alert, with temperatures still expected to top 40C in the east and south and violent thunderstorms forecast locally. 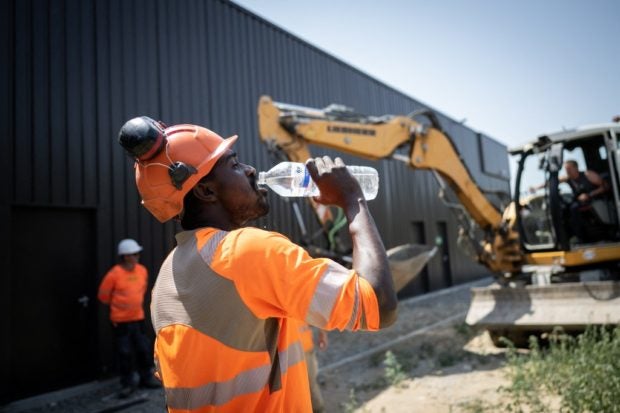 A worker drinks water in a construction site in Savenay, outside Nantes, on July 18, 2022, as a heatwave hits France. (Photo by Loic VENANCE / AFP)

The heatwave — the second to engulf parts of Europe in recent weeks — has contributed to deadly wildfires in France, Greece, Portugal and Spain, destroying vast tracts of land.

Firefighters in France’s southwest were still struggling to contain two massive fires that have caused widespread destruction and forced tens of thousands of people to leave their homes.

Nearly 1,700 firefighters from all over the country, supported by significant air resources, are battling the two blazes that have so far burned nearly 17,000 hectares (42,000 acres) of forest.

“It’s heartbreaking,” said Patrick Davet, mayor of La Teste-de-Buch, the site of one inferno which has prompted mass evacuations.

In Brittany, a region not typically impacted by forest fires, hundreds of firefighters, specialized vehicles and waterbombing aircraft were tackling blazes in the Finistere region.

Several smaller fires were reported across the region.

Prosecutors in the southwest city of Bordeaux said late Monday a man suspected of having started one of the fires had been taken into custody.

In Spain — nearly 10 days into the latest heatwave — more than a dozen fires continued to rage Tuesday, including in the northwest province of Zamora, which already experienced a huge fire last month.

Known as one of the largest wolf reserves in Europe, it saw nearly 30,000 hectares of land reduced to ashes during the June blaze.

Nearly 6,000 people had to be evacuated from there this week after flames destroyed several thousand hectares of meadows and forests, regional authorities said. 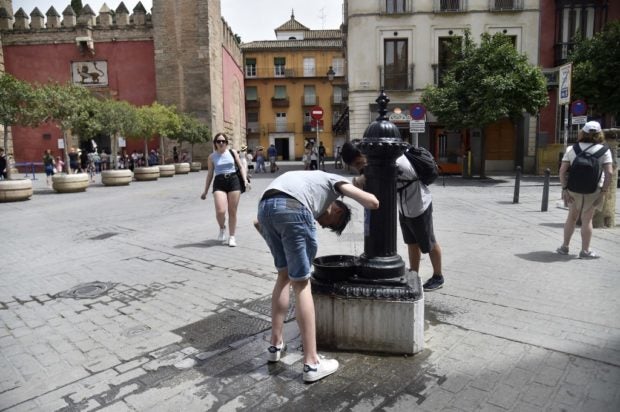 People cool off to fight the scorching heat during a heatwave in Seville on June 13, 2022. (Photo by CRISTINA QUICLER / AFP)

Train traffic between Madrid and Galicia, in the northwest of the country, remained suspended after fires on either side of the track.

Several people have died in recent days due to the blazes while separately, an office worker in his 50s died from heatstroke in Madrid.

In Portugal, more than 1,400 firefighters were fighting fires in the center and north of the country, despite a clear drop in temperatures in recent days.

A couple in their 70s died Monday after they ran off the road while trying to escape the flames in their car.

Almost the entire country has been on high alert for wildfires despite a slight drop in temperatures, which last Thursday hit 47C — a record for July.

The fires have already killed two other people, injured around 60 and destroyed between 12,000 and 15,000 hectares of land there.

Elsewhere, temperatures could locally exceed 40C in Belgium near the French border, prompting the Royal Meteorological Institute to issue its highest alert level.

In Germany, temperatures were expected to reach up to 40C in the west.

On Monday, two firefighters were injured while beating back a forest fire in a mountainous area in Saxony state.

The hot, dry summer so far has raised fears of drought, with the German Farmers’ Association president warning of “major losses” in food production.

Henning Christ, who grows wheat and other crops in Brandenburg state, told AFP his farm was about 20 percent below its average annual yield.

“We’ve had almost no rain for months, coupled with high temperatures,” he said.

“We have become used to drought and dry periods to some extent, but this year has been very unusual.”

On Monday, European Commission researchers said 46 percent of EU territory was exposed to warning-level drought. Eleven percent was at an alert level, and crops were already suffering from lack of water.