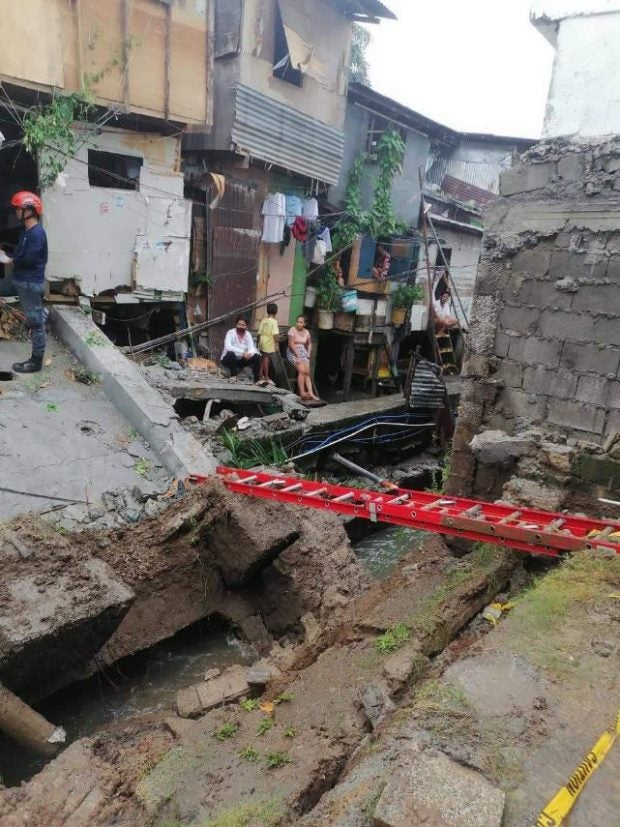 The entire wall collapsed over the creek at the other side of Union Village’s perimeter wall and into the houses of informal settlers adjacent to it. (Photo from Quezon City Public Information Office)

MANILA, Philippines —Heavy rain showers over the weekend caused a back wall inside a private subdivision in Barangay Culiat, Quezon City to collapse, endangering the lives of 14 informal-settler families, the local government said on Tuesday.

In a statement, Quezon City’s Department of the Building Official head Dale Perral said the entire wall collapsed over the creek at the other side of Union Village’s perimeter wall and into the houses of informal settlers adjacent to it.

There were no reports of injuries following the incident.

The local government started removing the debris over the weekend.

Assistant City Engineer Robert Lui Beltran said the engineering team has already cleared 100 percent of the rubble and that the team would pack up by Wednesday.

Beltran said they would immediately construct a retaining wall to replace the collapsed structure.

“We will design a retaining wall to replace it as soon as possible. However, we strongly urge the residents to avoid putting any structure above it to ensure everyone’s safety,” Beltran explained.

“However, the area did not meet the parameters of the National Housing Authority,” Conejero said.

“But as per the directive of Mayor Belmonte, families living in danger zones, including those who reside along creeks, will now be prioritized in in-city housing projects to ensure their safety,” he added.

Perral said the incident is a “grim reminder” to all structure or building owners to keep the rivers and connecting creeks free from any form of obstruction.

“The law strictly prohibits the construction of any structure along the waterways or on top of ripraps or retaining walls since it is unsafe and poses an imminent danger to life and limb of QCitizens,” he added.