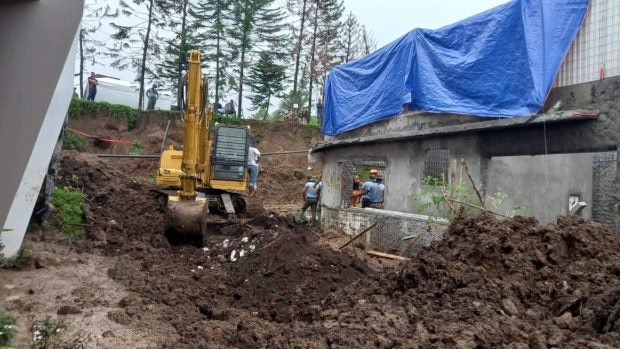 Authorities conducted a search, rescue and retrieval operation on Tuesday, July 12, 2022, a day after a concrete wall collapsed on eight construction workers at Barangay Kaybagal Central in Tagaytay City. (Photo from the Provincial Disaster Risk Reduction and Management Office of Cavite)

Initial investigation from the Tagaytay City Police Station revealed that the stay-in workers were resting on their barracks when the nearby wall of Hortaleza Farm fell on them due to the heavy rainfall.

The Philippine National Police (PNP) said that six of the victims have died, while two were left wounded from the incident that happened around 6:20 p.m.

(The confirmed deaths from last night until 12:45 in the afternoon today totaled to six. Aside from the six who were killed, two victims are currently injured.)

Meanwhile, Marco Paulo Abarrientos and Anthony Villasquez were the two victims who survived the said ordeal.

2 killed in elevator crash in Makati