2 killed in elevator crash in Makati 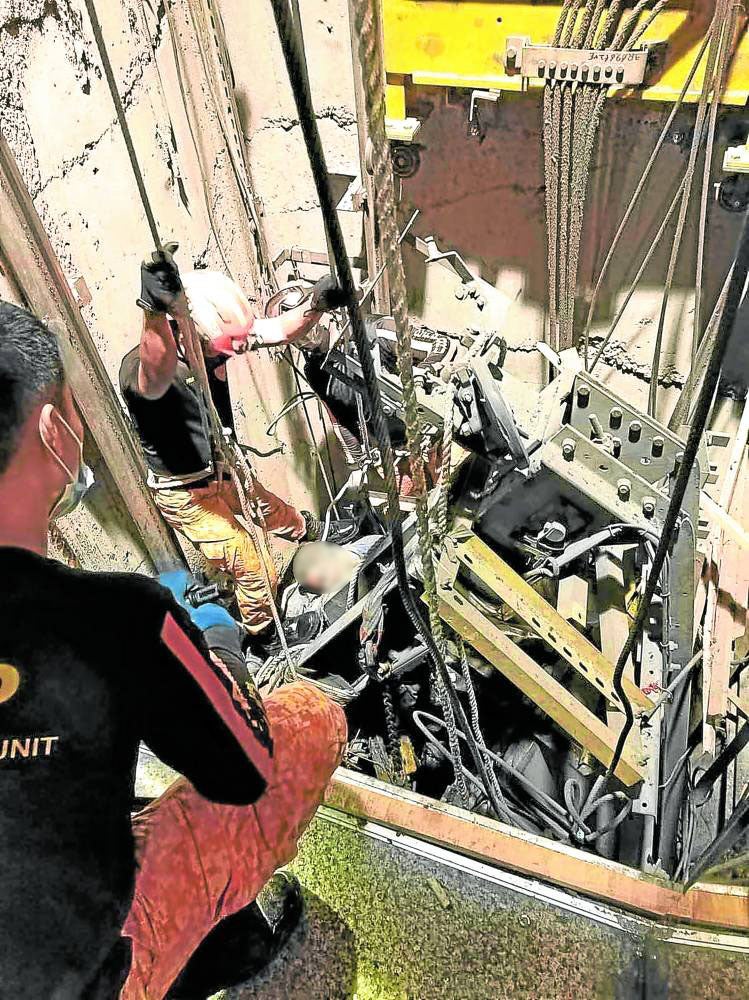 FREE FALL An elevator repairman looks at what remained of
the elevator after it fell from the 38th floor to the ground while
being dismantled. —PHOTO FROMBUREAU OF FIRE PROTECTION-MAKATI

At least two individuals were killed after an elevator of a building in Makati City’s central business district collapsed early on Friday. The fatalities were identified as Manuel Linayao and Rey Miguel Gillera, both elevator installers and employees of DLC Contractor. According to a police report, repairmen were fixing an elevator on the sixth floor of Burgundy Corporate Tower along Gil Puyat Avenue around 3 a.m. when suddenly an elevator from the top 38th floor “accidentally fell” down to the basement of the building. The crash killed Linayao and Gillera, and also injured two other repairmen from the same subcontractor. The Bureau of Fire Protection is still investigating the incident at the Burgundy Corporate Tower, a 38-story office condominium built in 2002. Rajan Komarasu, the president of Concepcion-Otis Philippines Inc., which was contracted to maintain and repair the elevators at Burgundy tower, said they would shoulder the burial of the dead elevator installers, and the hospitalization of the two injured. Komarasu said the elevator that crashed was “being dismantled,” and “was not in operation and under replacement.” “We would like to reassure that the existing elevator units currently in service have gone through necessary inspections and are safe to use,” he said. On March 1, 2019, Makati Mayor Abby Binay ordered the Office of the Building Official to conduct “a rigorous inspection of all elevators in Makati buildings to ensure their compliance with the safety requirements after an elevator at the Philippine Bank of Communications Tower located on Ayala Avenue fell from the 10th floor to the ground, injuring 17 people. —Dexter Cabalza

Read Next
Flash floods, mudslides sweep through Ifugao town
EDITORS' PICK
House energy committee chair Arroyo bats for cheap electricity
Why Tagle is a leading papal contender
A laptop that maximizes your WiFi so you can maximize your productivity
PH resumes talks with China on Chinese-funded transport projects
Powered by style, innovation and passion
In Borongan, nuns play hoops (not mahjong)
MOST READ
Imee Marcos bares illegal importation of white onions
Why Tagle is a leading papal contender
Zubiri on SRA mess: Shameful, disgusting
Arjo Atayde reveals proposal to Maine Mendoza was ‘more than a year’ in the making
Don't miss out on the latest news and information.