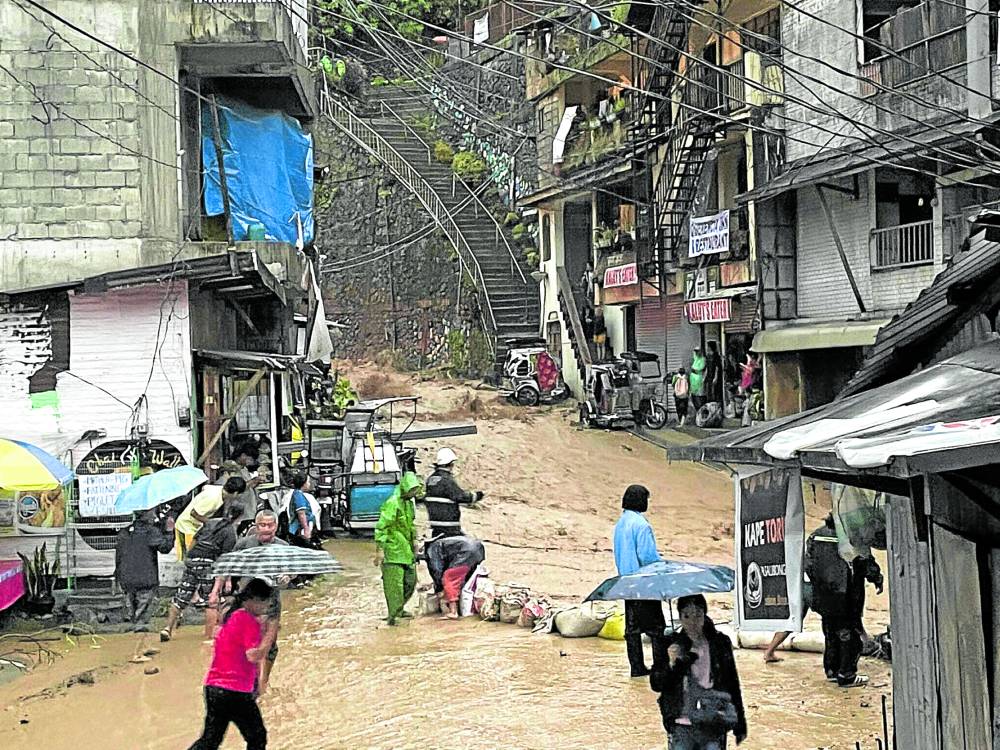 TRAIL OF DESTRUCTION Rocks and mud cover a portion of a washed-out road at Barangay Tam-an in Banaue, Ifugao, following Thursday’s flash flood spawned by heavy downpour due to the southwest monsoon. —PHOTO COURTESY OF THE BANAUE MUNICIPAL POLICE

At least 500 families (around 1,500 individuals) were evacuated to safety after after heavy rains triggered flash floods and mudslides in Banaue town, Ifugao province on Thursday, authorities said.

In a report on Friday, the regional office of the Department of Social Welfare and Development (DSWD) in Cordillera, said the displaced residents were from the villages of Poblacion, Tam-an, Bocos, Poitan, Amganad and Viewpoint.

According to the National Disaster Risk Reduction and Management Council (NDRRMC), three people sustained minor injuries due to raging floodwaters.

Based on NDRRMC’s initial assessment, one house was destroyed when it was struck by the flash floods, but residents in Tam-an said several more houses were lost to the raging water in hillside areas.

At the height of the flash floods that hit Banaue, home to the rice terraces, residents appealed for help as the torrent of muddy water rushed down slope. In an interview, Tam-an villager Nona Nia Nicampo said she saw how several parked vehicles were swept away in the flash floods on Thursday evening.

“Let us pray for Banaue. We hope that people here are all safe despite the damage that we have suffered,” she said.

Authorities have yet to estimate the cost of the damage caused by the flash floods and mudslides.

But there were no reports of damaged sections of the rice terraces, which Banaue is famous for. Analiza Guya, another Tam-an resident, said it was their first time experiencing a violent flash flood and that “no one saw it coming.”

“We were caught by surprise. Almost all barangays of Banaue were affected by flash floods and mudslides,” she said.

According to the DSWD, it initially distributed P339,375 worth of assistance, including food packs, to the affected residents. Most of the evacuees were temporarily staying at the Banaue municipal gymnasium.

The agency had also coordinated with the local social welfare office of the town in assessing the other needs of the displaced villagers, including medicine and hygiene kits.

Several roads were temporarily closed to give way to clearing operations while a large part of Banaue experienced power interruptions when strong winds toppled electric lines, the NDRRMC said.

In another report, the Banaue municipal disaster risk reduction and management office (MDRRMO) said the road connecting Banaue and the capital town of Lagawe remained closed due to several incidents of landslides in the area.

The MDRRMO said three separate roads connecting Banaue to the towns of Bontoc in Mountain Province and Hungduan and Mayoyao in Ifugao were already reopened to accommodate light vehicles on Friday.

In an advisory on Friday, Jovita Ganongan, director of the Department of Tourism in Cordillera, suspended all tourism-related activities and travels to Banaue while clearing and cleaning operations were underway.