Ex-Cebu town mayor in Duterte ‘narcolist’ comes out of hiding 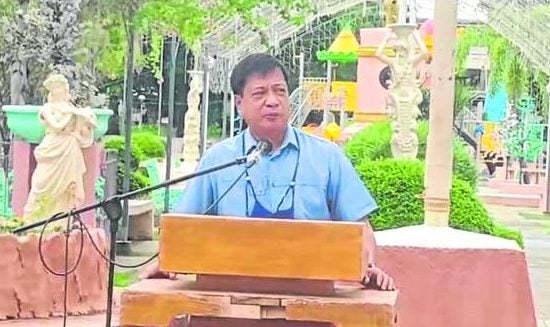 CEBU CITY—A former mayor of a Cebu town who was implicated in the illegal drugs trade by former President Duterte is back in government after close to four years in hiding.

Vicente Loot, a retired police general who was included in Duterte’s so-called “narcolist” of politicians and government officials, was appointed administrator of Daanbantayan, where he was the erstwhile chief executive, by his stepson, Mayor Sun Shimura.

Loot, who went into hiding after a failed attempt on his life in 2018 that Duterte had admitted he ordered, attended Monday’s flag-raising ceremony at the municipal hall of Daanbantayan, located 128 kilometers north of Cebu City.

As the town’s administrator, Loot will lead the operations of all municipal departments and act as a liaison between the mayor and the department heads.

In a speech, the video of which was posted on the official Facebook page of Daanbantayan, Loot said he was very happy to return and serve his constituents once again.

“I find this day very special. This is a time to make things clear under the new and fresh mandate given to me by our mayor,” he said.

In May 2016, Loot ran for mayor of Daanbantayan town. He won against then incumbent mayor Augusto Corro by a margin of just seven votes.

Two months later, Loot was publicly identified, along with four other police generals by Duterte, as among the country’s alleged top illegal drug coddlers. The five denied Duterte’s allegations.

In May 2018, unidentified armed men fired at the pumpboat that he and his family were boarding while it was about to dock at the port in Barangay Maya, Daanbantayan.

Two drivers, a nanny of Loot’s grandchildren, and a porter standing nearby at the dock area were wounded.

After surviving the attack, Loot was never seen in public.

In September 2019, Duterte admitted that he had ordered the ambush of Loot.

Duterte, however, recanted his statements and pointed to his 2016 presidential elections rival, former Interior Secretary Mar Roxas, as the one who ordered the assault.

“Loot was ambushed twice but could not be killed. I did not order the ambush. It was Roxas. Roxas ordered his ambush, not me,” Duterte said.

Despite the threats, no charges were filed against Loot in connection with the illegal drug trade.

The Inquirer tried but failed to reach Loot through his phone on Friday.

In his speech on Monday, Loot did not talk about the issues surrounding him and Duterte.

He deferred instead to his stepson as the town’s new chief executive, saying: “Mayor Sun is his own man. I’m his soldier. And as a good soldier, I’ll follow whatever my superior would say to me.”

He added: “My first order to you is anybody who will address me as mayor will pay the fine of one box of pizza. You can call me anything but not mayor because I’m just a subordinate (of Shimura).”