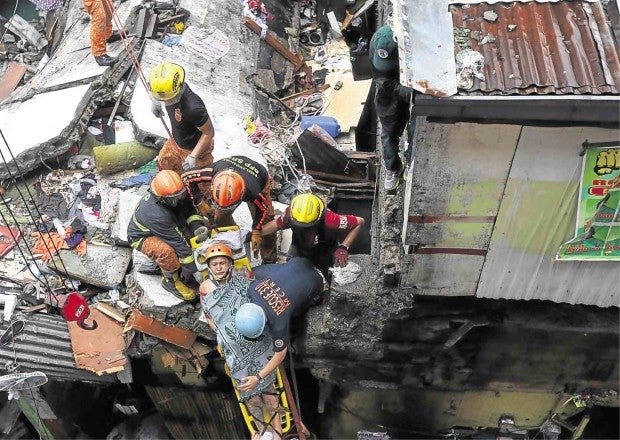 SHANTYTOWN TRAGEDY. Rescuers pull out a survivor from the rubble after a wall fell on a cluster of shanties in Sta. Cruz, Manila, on Saturday morning. Four more residents were injured while two teenage girls were crushed to death. Around 25 neighboring families were ordered to evacuate. PHOTOS BY MARIANNE BERMUDEZ

TWO MINORS were killed and several others were injured after a wall collapsed and fell on nearby shanties amid heavy rains in Sta. Cruz, Manila, on Saturday.

Johnny Yu, head of the city’s disaster risk reduction and management office, said the two girls were still alive when they were pulled out from the rubble, but there were metallic objects piercing their bodies and they were bleeding profusely.

Argilyn Joyce was brought to Jose Reyes Memorial hospital and Mary Hope to Ospital ng Maynila, where they died while undergoing treatment.

Yu said the girls were among the seven people pulled out by the rescue team from the debris, after a wall collapsed on their homes around 8 a.m. in Barangay 310, Zone 31. 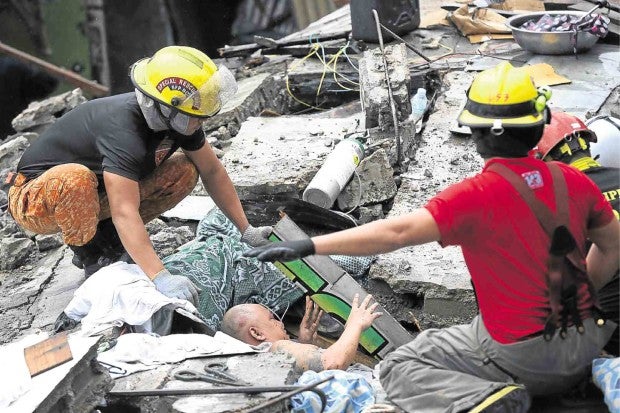 Four of the five injured survivors were Arnold Dizon Gomez, 35, who was rushed to Jose Reyes Memorial hospital for a knee injury; Rommel Idio, 31, who was brought to Sampaloc hospital; Pedro Elbanbuena, 32, who was treated by the rescuers for cuts in his arm, and James Cichon who sustained bruises.

According to Yu, one of the wall’s posts leaned and took the rest of the structure down with it after incessant rains since Friday night made the ground soft.

The wall, which was built along Doroteo Jose near the corner of Oroquieta Street, fell on at least five shanties. Around 25 families in the same neighborhood were ordered to evacuate and given temporary shelter in a basketball court.