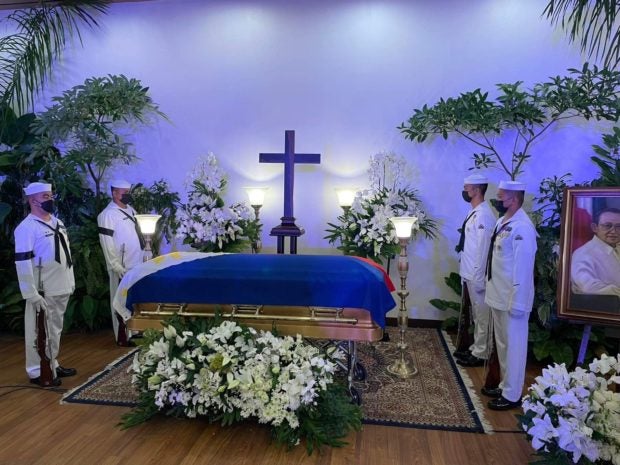 The urn of former President Fidel V. Ramos was transferred to a casket laid with a Philippine flag before the mass and state funeral before he is placed in his final resting place at the Libingan ng mga Bayani. Photo c/o Jojo Terencio

MANILA, Philippines — A funeral mass is being held Tuesday in Taguig City before the burial of late President Fidel V. Ramos.

The funeral mass closed to the public and attended only by family members at the Heritage Chapel in Taguig City before he is finally laid to rest at the Libingan ng mga Bayani.

Before the mass, family members bid farewell to the former president.

Family members bid farewell to late President Fidel Ramos. A funeral mass will be held at the Heritage Chapel in Taguig City before the burial at the Libingan ng mga Bayani. 📸: Jojo Terencio pic.twitter.com/haj9vJzEvc

“Our family is truly grateful for the overwhelming outpouring of support and well wishes,” Ramos’ grandson, Sam Ramos-Jones, earlier said in a statement.

“As we grieve, let us also celebrate a rich life – dedicated in service to this nation and its people,” he added.

According to the Palace, Ramos will be accorded a state funeral with full military honors shortly before his inurnment. The Palace also earlier declared a 10-day “period of national mourning” following the former president’s death.

Information shared to the media indicate that following the mass, there will be a procession to the Libingan ng mga Bayani.

The ceremony at the Libingan ng mga Bayani includes full military honors and a 21-gun salute. A Philippine flag will also be turned over to Ramos’ family and favorite music of the late president will also be played.