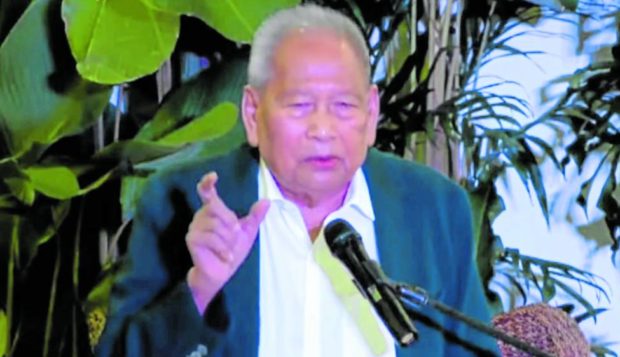 MANILA, Philippines — The late former President Fidel V. Ramos had twice rejected calls to take over the government during critical periods which also imperiled the country, according to his former national security adviser.

Because of this refusal to seize power when he could have, Ramos deserved to be revered as a national hero along with the likes of Dr. Jose Rizal, Andres Bonifacio, and Antonio Luna, “who helped the birth of a new sovereign nation,” Jose Almonte said in his eulogy to his former boss at Heritage Memorial Park in Taguig City on Saturday.

Almonte, 90, recalled that when Ferdinand Marcos Sr. and his family fled to Hawaii in February 1986 after the Edsa People Power Revolution which toppled his regime, “there was a vacuum in terms of national leadership.”

Almonte said there were debating “voices” on who should replace Marcos, as they considered the dictator’s challenger Corazon Aquino, or any of the key players in the withdrawal of support for Marcos — then vice chief of taff of the Armed Forces Ramos, or then Defense Minister Juan Ponce Enrile.

But Ramos balked at that proposal, Almonte said, as he quoted him saying: “I don’t want to be a part of a decision or action that will make this nation a banana republic ruled by the barrel of a gun.”

After Aquino became president, at least nine coups were mounted against her government.

But Ramos, who served as her military chief and later defense secretary, stood by her government.

Almonte recalled that during the 1989 coup, considered the deadliest in Aquino’s presidency as the mutineers came close to seizing power, some Cabinet members had suggested to Ramos that he take over “because Cory could no longer govern [or] even protect herself.”

The former adviser of Ramos quoted him as saying in response: “I don’t want to preside over the dissolution of the republic. If there’s anybody in the military, police, or the civilian government who would like to be president, let them resign or retire, whichever it may be, then submit themselves to elections.”

Almonte said further, quoting Ramos: “Tell your friends that I, as secretary of defense, will defend the government of Cory Aquino and ensure her personal safety is in place.”

“I would like to submit to our nation, to everybody, that President Ramos deserves as much… I think three days [are] too long to prepare a proclamation to name Fidel Ramos a national hero of this nation,” he added.