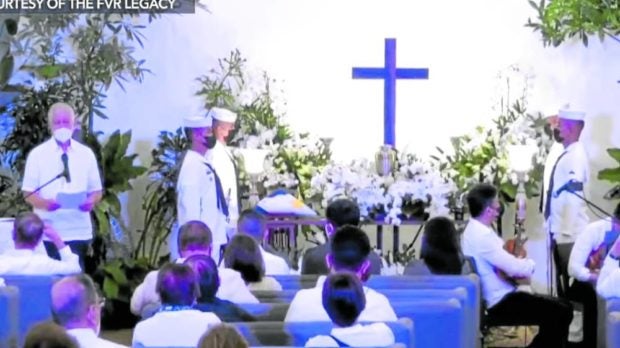 MANILA, Philippines — Members of the official family of Fidel V. Ramos shared several anecdotes about the late former president, which revealed his working style as well as an insight or two about the man, when they gathered on Friday at his wake in Taguig City.

Ramos, who died on July 31 at age 94, will be accorded a state funeral on Tuesday in honor of his service to the country as a military man and chief executive.

The country’s 12th president had served in the Armed Forces for much of his career in government and became its chief from 1986 to 1988.

One of the most striking details for which members of the Ramos Cabinet remember their former boss is his adherence to “complete staff work” (CSW) — a phrase applied to any task in Malacañang that needed thorough research and vetting.

CSW continued to be followed among the Palace staff long after the end of the Ramos years in 1998. The Presidential Management Staff even issued a memorandum on June 23, 2011, with the subject “Guidelines on the Conduct of Complete Staff Work (CSW) for the Presidency.”

The memo enjoined “all departments [of the Executive] to strictly observe timeliness and high standards in the submission of reports, memoranda and other documents requiring presidential decision, action or attendance.”

Other agencies which have adopted the CSW ethic define it as “a principle of management” in which “subordinates are responsible for submitting … recommendations to superiors [who in turn] need [to] do nothing further … than review” that recommendation pending approval.

Former Interior Secretary Rafael Alunan III said CSW was among the acronyms that Ramos made him internalize — another being NLT (“not later than”).

Alunan said Ramos’ leadership style forced his officials to master the tiniest detail of their functions, but it also empowered them and let them “manage by objectives.”

“You could not make any ‘boladas’ (empty talk). He would ask you a question even if by then, he already knew the answer. He just wanted to know whether you knew it [too],” Alunan said.

‘Little room’ in the Palace

He also remembered that for the Ramos Cabinet, the “new normal” of going to work meant field visits, waking up at 4 a.m., departing from Villamor Air Base by 6 a.m., and returning to Malacañang by 10 p.m.

“And you think we’d go home by then? No. We’d still have a meeting to wrap up things. By then tongues were hanging out especially his political and media critics whom he personally invited to join, … who were unfamiliar with his work ethic,” Alunan said.

“[The president] kept on bending backwards and walking the extra mile for a new beginning. He worked 24/7, but to us, his Cabinet, it was 25/8,” he added.

He recalled his ex-boss applying CSW in a “little room inside Malacañang, where Cabinet members often held bull sessions over conflicting policy decisions.”

According to him, the officials brought to that room were obliged to resolve whatever issue was being discussed by the time Ramos returned.

There were times when the president would run into a Cabinet official whom he thought should join that discussion.

“He would bring [the poor official] to the little room, and then say, ‘You sit down, I have some other things to do, and when I come back, you should have resolved that issue,’” De Ocampo said.

Because of this Ramos work ethic, the Cabinet members, who thought of themselves as underpaid, were also often “underfed,” he added.

“I often secretly sneaked under the table some cookies that I can munch on so that we will not perish while having the meeting,” De Ocampo said. He also remembered the president getting irritated at the sight of catered food being brought to Cabinet meetings.

During his official state visit to the United States in November 1993, the president took on what De Ocampo regarded as a “crazy tight” schedule that saw him meeting business and political leaders one after another even until past midnight.

On his second day during that visit, the US Secret Service itself had to assign a team to secure Ramos and his entourage, as it could no longer keep up with his daylong schedules.

“Even the hunky Americans had to give up. The American military could not keep up with Fidel Ramos of the Philippine military,” De Ocampo recalled in amusement.

Despite the frenzy of that visit, Ramos still found time to go jogging at Central Park in New York which was cold at that time.

Alunan remembered when Foreign Secretary Roberto Romulo complained to him about being obliged to accompany their boss.

“Raffy, I almost died this morning because the president wanted me to go with him, and I had no rubber shoes!” Alunan quoted the late diplomat as saying.

Former Defense Secretary Renato de Villa recalled his boss being an earnest reader of what the press reported — something he learned about the hard way.

“[One] morning he wakes up at 4 a.m. and calls me, asking me about the fund mess at the Tanay training command, to which, I had to say, ‘Sorry sir, but I have not read it,’” De Villa said.

Ramos then replied, as De Villa remembered telling him: “Goddamn it, you better buy newspapers and make sure you answer it before noontime.”

From that time on, De Villa said he was never caught “sleeping” over news reports again.

Former Senate President Franklin Drilon, who was Ramos’ justice secretary, described him as a “thinking president, a true technocrat.”

“He came to meetings prepared always. And it is sometime in the latter part of my political career when I [would] join meetings among some bureaucrats, I [would] miss the way President Ramos conducted [those] meetings — precision with full knowledge and full grasp of what was happening,” Drilon said.

But Ramos wasn’t always all business. Former Labor Secretary Maria Nieves Confesor recalled him asking her to invite her husband to a dinner that the president was hosting for a visiting state leader.

“The president came to me and told me, ‘Nieves, if Mr. Confesor does not appear in this state dinner, I will say you are merely hallucinating [about being married],” she quoted her boss as saying.

“That was one of the things that marked that relationship — that he was [also] a caring boss. He wanted to know who my husband was, who I cared for, and why he could not make me learn golf on Sunday,” she said.