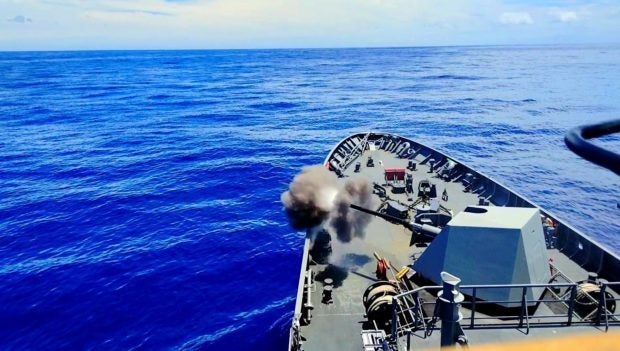 MANILA, Philippines — The BRP Antonio Luna (FF-151) is sailing home after standing out in the recently concluded Rim of the Pacific (Rimpac), the world’s largest naval war games, ranking third out of 17 participating warships at a gunnery exercise.

Vice Admiral Michael Boyle, Rimpac combined task force commander, announced the winners on the last day of the Rimpac on Aug. 4, according to the Philippine Navy. The NSFS Rodeo, part of the at-sea phase of the exercise held in mid-July, required participating warships to aim at a two-dimensional virtual land target.

It was the first time for the South Korean-built frigate to join an international naval exercise overseas since it was commissioned into service in 2021. The 140-man Rimpac contingent was led by Naval Task Group 80.5 commander Capt. Charles Villanueva.

“This achievement manifested that the Philippine Navy is capable of being at par with best navies in the world, which Rimpac 2022 has helped validate by providing resources and environment that permit multinational participants to achieve their individual and collective training objectives,” the Navy said.

“By coming together as this group of nations, we’re not just talking about being like-minded, we are demonstrating, we are the manifestation of likeminded nations by sending [and] committing forces and the money that it takes to have us come together here in Hawaii,” Boyle told reporters in a teleconference.

The Rimpac wrapped up as China conducted military drills around Taiwan, which it sees it as its own territory, following US House Speaker Nancy Pelosi’s visit to Taipei that infuriated Beijing.

Meanwhile, the Philippine Navy is also gearing up to host a large-scale multilateral exercise with its counterparts from the United States and Australia that underscores “maritime domain security and interoperability” amid China’s increasingly assertive behavior in regional seas. Japan, the United Kingdom and France will also join as observers.

A planning conference was recently held in Cebu City for the maritime training activity (MTA) Sama Sama-Lumbas, according to the Naval Forces Central. It will be the first time the annual MTA Sama Sama and Lumbas, which the Philippines holds separately with the United States and Australia, will be combined.

MTA Sama Sama-Lumbas will be held in the Visayas region in October and is expected to be the biggest exercise hosted by the Navy this year with almost a thousand participants from the Philippines, United States, Australia, Japan, and France.

Read Next
Special Forces Regiment members pay tribute to FVR
EDITORS' PICK
Percy Lapid’s kin: ‘We demand that his cowardly assassins be brought to justice’
Nothing’s certain so here’s how everyday Filipinos can make the most out of their Plan B
Do all the things you do, faster
PNP vows to bring justice for slain Percy Lapid; says probe underway
House energy committee chair Arroyo bats for cheap electricity
‘Seniority’ requirement despite vacant posts in DOH bothers senators
MOST READ
Student stabs teacher dead in Samar town
Trixie Angeles quits as press secretary due to health reasons
Not rehired?: Trixie Angeles not on list of reappointed Cabinet execs
Final net satisfaction rating slightly decreases for Robredo, Sotto — SWS
Don't miss out on the latest news and information.