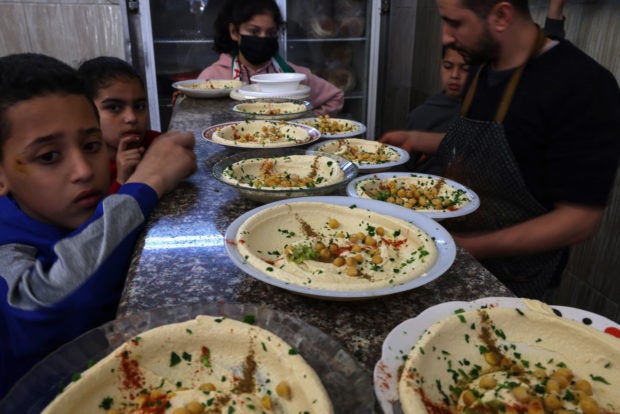 A Palestinian vendor prepares hummus plates for customers during the shopping rush before the fast-breaking Iftar meal in the Muslim fasting month of Ramadan, in Gaza city on April 14, 2022. AFP

JERSUSALEM — From the ancient alleys of Jerusalem’s Old City to kitchens around the world, Palestinians are stirring new trends in cooking while abiding by traditions.

The trend has whipped up a growing appetite for specialized books and food tours.

“It’s changing for the better, I think. Many Palestinians are keen on promoting their foods,” said Nassar Odeh, as oven aromas wafted over a Jerusalem street.

The Palestinian entrepreneur has spent the past few months watching gourmands drift in and out of his new eatery, Taboon, named after the traditional clay oven.

Customers are tucking into dishes such as Armenian lahmajoon, a thin pizza with ground meat and spices which Odeh remembers being sold to hungry crowds in the Old City decades earlier.

“Armenian dishes are part of the Palestinian culture,” said Odeh, whose bar also serves beer and wines from the Israeli-occupied West Bank.

“This is extremely important because this emphasizes the Palestinian presence and the entrepreneurship,” he said. “We need to be proud of our products.”

Opened last year in what was once the family’s souvenir store, Taboon is part of a string of new Palestinian bars, cafes and restaurants.

Beyond those within the Old City walls, they have sprung up in other areas of annexed east Jerusalem such as the Sheikh Jarrah neighbourhood, or further afield in Ramallah in the West Bank.

They range from a fine dining experience to fusion menus, blending Palestinian ingredients with European dishes, according to Izzeldin Bukhari, who runs Jerusalem food tours and cooking classes.

“It’s a great start; we’re really in the beginning,” said Bukhari, who plans to offer consulting services to business owners wanting to revitalise their restaurants.

“Everyone was doing kind of the same thing, but lately I see people stepping up and doing a new concept, new ideas,” he said.

Showcasing the breadth of Palestinian dishes and produce remains central for Dalia Dabdoub, who manages Taboon and owns bars in the West Bank cities of Bethlehem and Jericho.

“We want to change the industry, in doing more food that people don’t know,” she said.

A variety of aubergines renowned locally which come from Battir, a village in the Bethlehem area, will soon be hitting the Taboon menu, while some produce is imported from Gaza.

“I always try to choose the tomatoes; when they come from Gaza they’re really red and they’re tastier,” said Dabdoub.

The advent of new eateries builds on the Old City’s history of hole-in-the-wall spots, specialising in a single dish like falafel.

Palestinian chef Sami Tamimi grew up with home cooking, such as school packed lunches of cauliflower fritters stuffed in pita, and went out for certain foods.

“I remember carrying a plate and going to the hummus guy,” said Tamimi, talking avidly about beloved dishes including stuffed vine leaves and courgettes.

Such traditional foods and contemporary takes were compiled in the chef’s 2020 cookbook: ‘Falastin’.

“Just 10 years ago, if you went to a publisher and said I want to publish a book about Palestinian food, they would say ‘Who’s going to buy it?'” said Tamimi, who moved to London more than two decades ago.

A growing interest in Palestinian food abroad is tied to a shift away from presenting Mediterranean or Middle Eastern cuisine as one set of recipes.

“Nowadays you see more focus on the country, or the place and their food… I think it’s a wonderful thing,” said Tamimi, who has a series of cookbooks and runs restaurants with Israeli business partner Yotam Ottolenghi.

Israelis have proven more successful than Palestinians in branding local cuisine, noted Bukhari, including an image of an Israeli flag atop falafel at Tel Aviv airport.

“They are very good at marketing it,” said the SacredCuisine founder. “We are leaving a gap for the Israelis to talk about our food.”

But Palestinians are catching up internationally, with Bethlehem chef Fadi Kattan set to open a London restaurant later this year.

Tamimi himself is due to return briefly to Jerusalem for a residency at the historic American Colony Hotel in October.

His two-week menu follows a previous event there when the chef saw just how much has changed on the city’s food scene.

“It was the first time that I worked with a whole team of Palestinians,” he said.

Hummus where the heart is

Hummus that’s worth it; steakhouse many haven’t discovered

KFC to go comes to Gaza… by tunnel