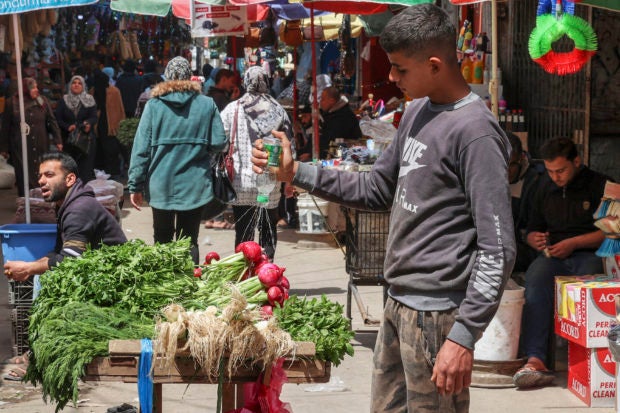 A street vendor waters his plants in Al-Zawya old market in Gaza City, as Palestinians prepare for the upcoming Muslim holy fasting month of Ramadan on March 29, 2022. AFP

BEIRUT — Russia’s Ukraine invasion, which has already exacerbated food woes in parts of Africa and the Middle East, is marring preparations for the holy month of Ramadan and forcing a turn to frugal iftar sunset meals.

From Lebanon to Tunisia and Somalia, Muslims who traditionally break a dawn-to-dusk fast with lavish family meals, are now struggling to secure even the most basic staples in light of skyrocketing food and fuel prices.

“High prices affect and spoil the spirit of Ramadan,” said Sabah Fatoum, a resident of the Israeli-blockaded Gaza strip, where consumer goods prices have climbed by up to 11 percent, according to Palestinian authorities.

“We hear that prices will rise even more… it’s a burden for people,” the 45-year-old told AFP ahead of the holy month that starts this weekend with the sighting of the crescent moon.

Russia and Ukraine, with vast grain-growing regions that are among the world’s main breadbaskets, account for a huge share of the globe’s exports in several major commodities such as wheat, vegetable oil and corn.

The disruption in export flows resulting from Russia’s invasion and international sanctions has spurred fears of a global hunger crisis, especially across the Middle East and Africa, where the knock-on effects are already playing out.

The toll is most evident in countries such as Yemen, the Arab world’s poorest, where a devastating war since 2014 has sparked one of the world’s worst humanitarian crises.

Food prices there have doubled since last year and the fact that Ukraine supplies nearly a third of Yemen’s wheat imports has heightened fears of a deepening famine.

Mohsen Saleh, a resident of the capital Sanaa, said that every year prices shoot up ahead of Ramadan, “but this year, they have increased in a crazy way, people can’t take it”.

“The economic situation is very difficult,” the 43-year-old told AFP. “Most people in Yemen are poor and exhausted.”

In Syria, where a conflict since 2011 has plunged nearly 60 percent of the population into food insecurity, Ramadan to many has become a painful reminder of better, bygone days.

Cooking oil has more than doubled in price since the start of the Ukraine war and is sold in limited quantities.

The Syrian government, not spared by its status as a staunch Moscow ally, is also rationing wheat, sugar and rice.

“I thought last Ramadan was going to be our most frugal,” said Basma Shabani, a 62-year-old Damascus resident, looking back at a year also marred by the Covid pandemic.

“But it seems that this year we will remove even more dishes from our spread.

“We can’t afford more than one type of dish on our table anymore and I am worried that in the future even this one dish will be beyond our reach.”

In Tunis, Ramadan traditions have also been put to the test.

Food donations, a common custom during the holy month, have dropped to a trickle, with former benefactors now struggling to source basics for themselves.

“Our donation cart is usually full within the hour but this year this is not the case,” he told AFP.

“Some people are even telling us ‘let us find food for ourselves first’.”

In Lebanon, too, local charity networks are unravelling as the Ukraine crisis piles more pressure on a population hit hard by an unprecedented economic crisis since 2019.

“The strong solidarity which comes into action especially in months like Ramadan will be dramatically tested this year,” said Bujar Hoxha, Lebanon director for Care International.

“Hyperinflation and soaring food prices in local markets make the long-awaited Ramadan month for many Lebanese challenging,” he told AFP.

Many will “struggle to bring iftar meals to the table”.

In Egypt, a leading importer of wheat from the former Soviet states, Muslims are tightening their purse strings ahead of Ramadan — a time when spending usually rises.

The local currency also lost 17 percent of its value that same month.

“If someone used to buy three kilos of vegetables, now they’re only buying one,” said Om Badreya, a street vendor in western Cairo.

Somalia, which is grappling with an Islamist insurgency and its worst drought in 40 years, is also gearing up for a grim Ramadan as rising prices slash the purchasing power of the 15-million strong population.

Ramadan “will be much different as fuel and food prices are skyrocketing”, said Mogadishu resident Adla Nur.

Even oil-rich Saudi Arabia is feeling the pinch.

“Everything is getting more expensive… every time I pay around 20-30 riyals ($5-$8) more for the same products,” said Ahmad al-Assad, a 38-year-old private sector employee.

Qatar, however, has emerged as an exception with the government decreasing food prices ahead of Ramadan in a symbolic gesture.

“Prices of more than 800 commodities have been reduced in coordination with major outlets in Qatar, starting from Wednesday, March 23 until the holy month of Ramadan,” said Qatar’s commerce and industry ministry.